This is the third time since the year began that schools have been targeted, prompting White House and FBI investigations. But will it be enough?

The latest in a wave of bomb threats targeted more than a dozen Historically Black Colleges and Universities, including Howard University and Spelman college who both reported bomb threats on Tuesday. The FBI says it's investigating Tuesday's threats, the third wave of bomb threats at HBCUs since the year began, after at least six schools reported similar incidents on Monday. As we wait to find out who is responsible for the incidents and what course of action will be followed, we are reminded of a painful history.

"The FBI is aware of the series of bomb threats around the country, and we are working with our law enforcement partners to address any potential threats," the agency said in a statement, urging citizens to report any suspicious activity to law enforcement immediately.

Anti-Racist Curriculum: How to Talk to Your Kids About Black History

Although no bombs were found, Jen Psaki, the White House press secretary said the Biden administration is taking the threats seriously.

The list of targeted campuses contains at least 17 schools, most of which are concentrated in the southern United States, spanning schools like Xavier University of Louisiana and Edward Waters University in Jacksonville, Florida. At nearly all of the schools, class was canceled and students were told to shelter in place, until they received an "all clear" from administrators Tuesday afternoon. Students are understandably rattled.

"My message to you this morning is to stay strong, remain resilient, and continue to prepare yourselves to grow the future and lead the world because our nation and world desperately need more leaders steeped in the values we teach here at Morgan," said Morgan State University President David K. Wilson in a statement early Tuesday morning, before urging the FBI to "vigorously investigate" the threats to Morgan and other HBCUs on Twitter. "Those values are Leadership, Integrity, Innovation, Diversity, Excellence and Respect. Hate is not one of them!"

Still, starting Black History Month this way is impacting students and many are expressing concerns that the FBI isn't doing enough. And it's not the first time Black communities have felt this way.

There's a long history of domestic terrorists using bombs to terrorize Black communites, with one of the most devastating incidents being the 16th Street Baptist Church bombing of 1963 when four Black girls were killed and 20 individuals were injured. Three years earlier, in 1960, English Avenue Elementary School in Atlanta, Georgia, was bombed in response to efforts to integrate schools.

Wayne A. I. Frederick, president of Howard University, said in a statement that Black History is littered with targeted harassment like these.

"The Black community is no stranger to these sorts of threats, both real and fabricated," Frederick says. "The institutions, dedicated to the education of people of color, have always been a source of fear and a target of violence for those who wish to undermine the pursuit of justice and enshrine the unequal status quo in our society." 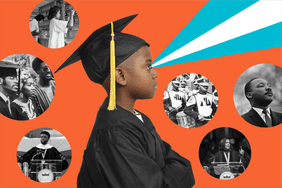