If the series finale of black-ish left a hole in your heart or your watchlist, here are a few shows about Black families that will help fill the void.

Following eight seasons on ABC, the hit sitcom black-ish bid farewell to fans. Created by Kenya Barris, black-ish followed an upper-middle class Black family and navigated a range of social issues and family dynamics. From examining the intersections of Black identity to simply making us laugh, the Johnsons showed us what it was like to be Black in America. Dre (Anthony Anderson), Rainbow (Tracee Ellis Ross) Johnson, and the gang will be missed as they made a life-changing decision to move to a Black neighborhood in Los Angeles' View Park during the series finale. Though this chapter may be over, watching these seven iconic Black family sitcoms will ensure black-ish fans remain entertained while paying homage to Black excellence.

This is one reboot that black-ish fans won't want to miss. Similar to its 1988 predecessor, the 2021 The Wonder Years is a coming-of-age family dramedy. However, this remake by Neal Marlens and Carol Black is set in the late 1960s and embodies a landmark time in Black history. This time, the show explores the complicated identity of a Black preteen named Dean and the story of his family during the Civil Rights Movement in Montgomery. Similar to black-ish, The Wonder Years weaves together drama, comedy and Black family moments that capture the hearts of audiences. It's available for streaming on Hulu.

Class is officially in session with ABC's hit comedy mockumentary created by Quinta Brunson. Already picked up for a second season , Abbott Elementary is a 2022 show that gets an A+ for being funny, family-friendly and showing the importance of Black role models in the Philadelphia school system. Following the earnest teacher, Janine Teagues, her band of hard-working colleagues, and one colorful principal, this is one to add to all Black sitcom watchlists. It's available for streaming on Hulu.

From 2001 to 2006, audiences were graced with Larry Wilmore's iconic Fox sitcom, The Bernie Mac Show, which spanned five seasons and starred the late comedian, Bernie Mac. Loosely based on his comedy stand-up act, the series follows Mac and his wife Wanda as they raise his sister's three children. Just like black-ish, the show presents thoughtful commentary on being Black in America while also establishing moments of comedic gold. In fact, near the end of the series, Anthony Anderson makes an appearance as the character Bryana's long-lost father. In many ways, The Bernie Mac Show helped pave the way for future Black sitcoms. It's available for streaming on Peacock.

The Proud Family: Louder and Prouder

Disney Plus' reboot series, The Proud Family: Louder and Prouder, tells the classic story of animated comedy, The Proud Family, in a new light. The reboot premiered in 2022 with more Black talent than ever. Audiences hear familiar voices like Kyla Pratt, who voices main character Penny Proud, and new ones, like guest stars Lizzo, Gabrielle Union, Lil Nas X and many more. With an all-star lineup of talent, the series is a love letter to Black representation. This family-friendly show follows 14-year-old Penny Proud and her family and friends as she comes of age. The show has total black-ish vibes as it explores Black culture and comedy. It was picked up for a second season and is available for streaming on Disney Plus.

Here's one loveable sitcom that's a product of collective work from Chuck Lorre, Gina Yashere, Eddie Gorodetsky and Al Higgins. Bob Hearts Abishola is a 2019 CBS series that follows Bob Wheeler (Billy Gardell) and Abishola Bolatito (Folake Olowofoyeku), who meet and fall in love after Wheeler ends up in the hospital, where Bolatito works as a nurse. Together, they band together to merge two families from different cultures into one built on love. It's one of the few shows on a mainstream network to follow a Nigerian lead. It may resonate with black-ish viewers in the way that it celebrates family, Black identity and provides plenty of laughs. The show has been renewed for a fourth season and is available for streaming on Hulu, Paramount Plus, Amazon Prime Video, and other streaming providers.

Though it was canceled after two seasons, Mixed-ish is perfect for those that want to delve further into the black-ish characters and story. Told from Rainbow's (Tracee Ellis Ross) point of view as a child, this single-camera sitcom by Kenya Barris, Peter Saji and Tracee Ellis Ross arrived on ABC in 2019. It's a prequel to black-ish that explores the struggles of being a multiracial family in the 1980s, as well as Rainbow's parents' hippie lifestyle in the mid-80s. It's available for streaming on Hulu.

The Fresh Prince of Bel-Air

Despite Will Smith's recent Oscars controversy, The Fresh Prince of Bel-Air was one of the most monumental, trailblazing Black sitcoms to exist. Created by Andy and Susan Borowitz, the series premiered on NBC in 1990 and ran until 1996 for six seasons. The show followed Will (Will Smith), who was West Philadelphia-born and raised—until he got in life-changing trouble. In an effort to keep Will away from the bullying and gangs in West Philly, he was sent to live with his rich uncle and aunt in Bel-Air. In ways that relate to black-ish, Fresh Prince shows the ways in which race, class and hilarity can coincide to make a work that showcases the complexities of Black life. It's available for streaming on HBO Max, Amazon Prime Video, and Apple TV. 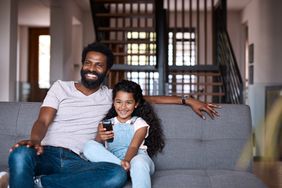