Have a sophomore who loves to go to parties with seniors and wants to stay out just as late? Researcher and child development specialist Jan Faull, MEd, weighs in on how to decide on the right curfew for your child based on his age.

As a mom of a teen, it's time to put on your power-parenting persona and open up curfew negotiations. There's no need to worry too much, because deep in your teens' heart, he really wants a reasonable and somewhat flexible curfew.

When your teen is out with friends, tired and ready to go home – or just plain not liking the social scene – it's difficult to say, "I'm tired, I'm going home." It's easier to say, "My curfew is 12:30. I'll be grounded if I'm not home soon."

Despite this fact, you need to bear up as your son, like any self-respecting teenager, will probably moan, stomp, and gripe while claiming, "None of my friends have curfews. You're a control freak."

Let your son go on as such, it's his teenaged job to do so. Then when this bit of typical teen resistance subsides, decide together on a reasonable curfew. Make sure you come with the attitude that curfews are about safety and care; they're not about curtailing the teenager's developmental drive for independence.

RELATED: 11 Best Apps for Parents to Monitor Their Kids

Here are some positions to bring to the negotiation table:

Tips for Enforcing Your Teen's Curfew

No matter the day or evening, you must insist on knowing your teen's whereabouts. While it's probably not necessary for him to call as he travels to Mary's house, then to Burger King, then to the movies, you do need to know of general plans. As you loosen your parenting reins, you're allowing your teen to exercise his developing judgment and build your trust. If he violates your trust or uses poor judgment, then it's a different story.

If your son pushes his weekend midnight curfew by arriving home at 12:20 a.m., what are you going to do? Ground him for two weeks and take away driving privileges? For one teen, such a grounding will bring about prompt compliance to the designated curfew. For another, during the two weeks of grounding, he might sneak in and out of the house. Once his confinement is over, he may find friends to spend the night with who have later curfews.

If the latter would be the case for your son, it's better to say when he's late, "I'm disappointed. I expect you to follow your curfew. I was worried, and it's only because I love you so much. In the future, if you're going to be home late, please call." Have goodwill in your voice and strength in your body language. Communicate concern and determination without starting a parent-teen tug-of-war.

One last tip: Staying awake until your son walks in the door is a very effective strategy. A teen who knows that Mom or Dad is sitting by the door is more likely to be prompt.

RELATED: Use This Dad's Genius Plan to Give Your Teen a Way Out of a Bad Situation 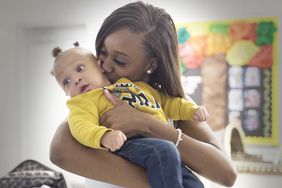