Recent school shootings have showed us how vulnerable our children can be. Find out what schools should consider doing to protect their students and teachers.

Metal detectors. Bulletproof backpacks. Armed guards. Panic buttons. Shatterproof glass. With safety proposals on the table at an increasing number of schools, your child may be entering a different world this fall. How do you know whether the building he spends his days in is truly safe?

Although many parents may feel understandably apprehensive, your fears shouldn't distract your child. "We want kids to feel safe, but we also need to keep their focus on learning," says Cathy Paine, a school psychologist in Springfield, Oregon, and chair of the National Emergency Assistance Team for the National Association of School Psychologists. Learning how schools can become more secure can help you worry less and keep kids out of danger.

Measures that make sense for one school may not be necessary for another, and since schools are notoriously cash-strapped, they may have to make tough choices. But communities should at least consider the following safety features; some are relatively inexpensive to implement.

"Every school and child-care center needs to have secure access," says Parents advisor Irwin Redlener, M.D., director of the National Center for Disaster Preparedness at Columbia University, in New York City. "There should be no chance for people to wander onto school property." Ideally, everyone entering your child's school should pass through two sets of locked, monitored doors at the main entrance. Additional doors used by staff can be secured with card readers. During arrival and dismissal, staffers should be visible, supervising entrances and exits.

Everyone who visits a school building should sign in and out, so that school personnel always know who is in the building. Some schools issue visitor badges or special ID cards for parents or give them card-reader access.

They help school staff watch over entrances and other parts of the school building, as well as keep a record of any suspicious activity. At the very least, one of these cameras should track the school's main entrance.

Lighted, monitored hallways and other areas

Staff should be on hand—including in cafeterias, parking lots, and playgrounds—to talk to kids and be aware of what's going on. "More adult presence helps reduce unusual behavior," says Paine. When key staff members are away from the building, the school shouldn't advertise their absence. If there is a marked parking spot for them, any passerby who sees an empty spot will know that they're away, says Curtis Lavarello, executive director of the School Safety Advocacy Council in Sarasota, Florida.

In response to Columbine in 1999, nearly every classroom now has a way of communicating with the school office, either by telephone, radio, or intercom. In Palm Beach County, Florida, teachers may even wear a listening device around their neck. By touching a button, they can alert the main office and turn on a microphone so staffers or police can hear what's going on in the room.

Fire codes and old hardware can sometimes make it tough for schools to install locks on the inside of classroom doors to keep intruders out. But most find ways to overcome these obstacles, says Lavarello.

Schools may consider adding this precaution or using film that covers existing glass and makes it bulletproof. It may not be practical everywhere, but some schools invest in this technology, at least for main entrance doors.

Roughly one-third of U.S. schools, mostly middle and high schools, already have them. An SRO is an armed police officer who is trained to work in a school setting and who becomes a part of the school community. The SRO's presence provides reassurance, and the officer can also help detect threats early and intervene.

Many parents and administrators would feel safest with an SRO present. But there aren't nearly enough police officers—let alone specially trained ones—to staff every school in the U.S. Lavarello does not recommend that school security guards carry a gun unless they have the same level of training as police officers (see "The Gun Question," on page 3). Instead, his group helps train road-patrol officers to become involved with the schools within their beat, so they'll be better prepared to respond if a crisis ever occurs.

Ask the principal what your school's emergency and security plans are. "You should see a plan explaining procedures, what to expect of the school, and what the school expects of you," says Mark Terry, 2012-2013 president of the National Association of Elementary School Principals. Will you need to show an ID to visit a classroom? If you plan to volunteer, do you have to complete special training or be fingerprinted? Where will you reunite with your child in case of an evacuation? Do staffers routinely monitor out-of-the-way areas, such as restrooms? "You wouldn't believe how many times I spend a whole week in a school and never see adult supervision in a student bathroom," says Lavarello.

Experts stress that having parents involved at school—as extra sets of adult eyes, ears, and hands—can make a big difference in school safety. So can talking to your child about security and her role in it. Make sure she knows that her teacher and other school staff work hard to keep her safe and that she should always follow their instructions in an emergency or during a drill.

Find out whether your school holds lockdown drills, and how often. During these drills, staff and students practice clearing hallways and stopping all activity and noise in the building. They should be held at least twice a year, at different times of day—including challenging periods like lunchtime or just prior to dismissal, says Ken Trump, president of National School Safety and Security Services, a consulting firm in Cleveland. Students need to know that lockdowns are a way to protect them. Eventually, they become as routine as fire drills.

Teachers should be trained not only in disaster prevention and early intervention but in crisis response. At Sandy Hook, crisis planning and training was critical. "The children and teachers knew what to do based on their drills," says Paine. "Adults undoubtedly saved kids' lives because they made contact with the shooter very quickly," adds Lavarello.

Also inquire whether community resources are involved in security planning. "We have a great relationship with our fire and police departments," says Terry. "They look at our plans and our building, and observe our drills. I encourage parents to look for that kind of partnership between first responders and the school." If there is no partnership, insist that administrators take steps to build the relationship. Says Dr. Redlener, "Parents have a role, schools have a role, and the larger community has a role in keeping kids safe."

Safety Behind the Scenes

While physical security is vitally important, so is "psychological" security. Attacks by armed intruders are very rare, and they are difficult to prevent. But identifying and stopping violent behavior by students is crucial. Teachers need to know how to recognize signs of trouble and intervene appropriately, and mental health professionals need to be available. "One way to make schools safer is to help children who have psychological disorders so they are healthy, happier, and safer," says Harold Koplewicz, M.D., president of the Child Mind Institute, in New York City, and a Parents advisor.

Ideally, every person who works with students or in a school should be trained in violence prevention, such as identifying behavioral red flags and resolving conflicts, explains Trump (of the National School Safety and Security Services). That includes teachers, administrators, support staff, custodians, bus drivers, and even some parent volunteers. Not every school is doing this yet, but it's becoming increasingly common. Programs to prevent bullying and help kids resolve conflicts can also stem school violence. What's more, adults and students should always report concerns about suspicious situations or potential violence to authorities. In several cases, students who had been planning a violent act have been stopped because their peers reported their behavior, says Paine. After the string of school shooting tragedies in the past years, it's no wonder that many parents feel hyper-vigilant, even though statistics show that school buildings are still extremely safe. "Times have changed," says Lavarello. "Who ever thought you'd see a day when you would be searched going into places like museums and baseball stadiums? But it's common sense. Why wouldn't we take the same precautions for our children?"

Unless your child needs services, you might not know what mental-health supports are available at school. "Fifteen percent of kids have mental-health or learning disorders," says Dr. Koplewicz. "Teachers need to know what's outside the range of normal social and emotional development, and how to intervene when a child becomes disruptive or withdrawn." They can learn about this through online continuing education or recertification training, so find out if it's part of your school's security plan. If it isn't, ask administrators when this will change.

If you're worried about your child, contact your pediatrician or school guidance counselor. The Pediatric Symptom Checklist is a simple screening tool that can help you think through your concerns; you'll need to share the results with your pediatrician.

Guns don't belong in schools unless they're in the hands of a trained police officer, say all of the experts interviewed for this story. Teachers, security guards, and other school staffers should not carry weapons. "If guns are available in schools, there is at least as great a likelihood of disaster occurring as a result of that as from a random shooter," says Dr. Redlener. Unlike trained, certified, full-time public-safety professionals, most school boards and administrators don't have the expertise to take on the responsibility and potential liability of having guns in schools, notes school-safety expert Ken Trump.

Plus, the presence of guns can detract from the true purpose of schools, says school psychologist Cathy Paine: "Relying on armed guards or—even worse—armed teachers can actually make kids feel less safe in school and make it harder for them to learn." 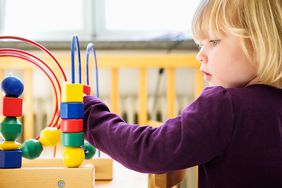 How to Keep Your Kid Safe in Daycare 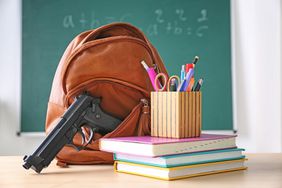 The Quest for School Safety