From Minecraft and Roblox to Fortnite and Halo, here's what you need to know about the virtual worlds your kids are spending time in.

For all the wild hype about the metaverse, the current reality is much more humdrum. At its core, the term refers to "a series of connected digital worlds in which users can interact through first-person avatars," according to a Common Sense Media white paper. Any adult who played or heard of The Sims online (or watched the episode of The Office that referenced it) will be familiar with the basic premise of the metaverse. Anyone who has played Fortnite, Rocket League, or Destiny online, or Halo for that matter, has already entered it.

When we're talking about the metaverse, it usually means a digital world accessible to many people with an internet connection simultaneously. Aspirationally, it refers to the idea of participating in these spaces in an immersive technology like virtual reality (VR). VR technology has come a long way in the past several years—devices are much cheaper and the content quality has improved—even if it's likely to develop further.

Like most internet trends, there's a metaverse for kids. Also like the rest of the internet, its quality and safety varies wildly, requiring some caregiver investment and oversight. But it can also be wildly fun and rewarding. Read on to see where the metaverse party has already started for kids, and what parents should keep in mind as they participate.

An Age-by-Age Guide to Fun in the Metaverse

Kids 6 and under: No metaverse for you

The youngest kids will likely skip out on the metaverse entirely. They're too young for most or all online multiplayer games and developmentally not ready for a VR headset, which can make some wearers nauseated and lead to eye strain. Most kids under 6 don't read or write fluently, so chatting isn't an appealing activity.

Games are still an option for these kids, though. Minecraft can be played locally on a gaming console or a private server, for example. The PBS Kids' app is free and full of high-quality entertainment. Options like these let younger kids in on the fun with fewer safety concerns.

Kids 6-12: Dip your toes in the metaverse

This is the age where online immersive play starts to expand. Meta's app Messenger Kids is designed for kids ages 6-12, who are too young to have a standard Facebook account. Reps from the company say that chatting with friends while playing the online game Roblox is a common practice—analogous to older children chatting on Discord while playing Fortnite, albeit with significantly more oversight baked in.

Shane Rafferty, a technology support specialist at Lurie Children's Hospital of Chicago, uses gaming and virtual reality to help entertain and support kids and families during hospital stays. He's seen firsthand how gaming can make a hospital stay less unpleasant, or be a welcome distraction from a medical procedure.

Minecraft is popular, he said, because of its open-ended nature: "Kids can do whatever they want."

Caregivers will want to pay special attention to privacy and security settings for kids at the lower end of this age range. Roblox's cutoff for preemptive chat filtering is 13, and parents can also restrict what activities kids can engage in and whether they can chat at all. The point of the metaverse is to be in digital community with other people, which is what makes it fun and requires caution. Semi-public spaces—like private Minecraft servers—can give kids opportunities to play online with friends.

Digital advocacy groups are increasingly calling on digital entertainment companies to be more responsive to children's play needs in their design. The 5Rights Foundation in the U.K. published a report last year outlining the ways in which digital media (including the nascent metaverse) are failing to meet kids' needs, and opportunities to do a better job. Interviewing kids, authors Kruakae Pothong and Sonia Livingstone found that kids want more control over how much they play and don't want to feel exploited by entertainment platforms. In individual families, parents can support their children in these goals by collaboratively discussing types and amounts of media use.

If kids have their own devices, it's especially important to have open discussions around how much and how often they use them. Before you hand over a device, your child should learn mindfulness—or what they're feeling in a given moment—to help them develop a healthy relationship with technology. One of the drawbacks of social and online media is that it can feel inescapable for kids—they're in the grip of their social world all the time. They need to know how and when to unplug.

Why and How To Teach Your Kids Mindfulness

Kids 13+: Mostly a free-for-all, but guidance is still important

This is the peak age for chatting over Discord while playing Fortnite, and if you haven't already heard of Twitch, you soon will. Millennial parents will likely remember the time they spent on AIM as teens, and today's platforms aren't much different. Most of the engagement benefits and risks are similar across digital entertainment options, whether that's TikTok, Instagram, or Animal Crossing.

Once children turn 13, there are fewer legal restrictions around their data and privacy. Functionally, they become adults on the internet. Because of this, privacy and safety concerns become paramount here. Parents should make sure that teens understand basic internet safety and know not to give out personal information over the internet.

Kids who are expanding their online social circle need to be prepared for what to do if they're harassed or stumble upon inappropriate content.

Are Kids and Teens Ready for a Tech Timeout?

"If you want them to explore, they are inevitably going to see things that are inappropriate," says Alexandra Lange, a design critic and author of the book The Design of Childhood. Telling children what to do when that happens, and letting them know that you won't be mad when they come to you, "can dispel some of the concern on both sides," she says.

What's Next for Kids in the Metaverse?

Despite press releases of big-name plans, like Lego and Epic, there's a shortage of details about exactly what a kid-friendly metaverse will look like. But when it comes to VR, there are some exciting applications.

Rafferty uses gaming and VR devices to support and entertain kids and families during hospital stays. VR in the metaverse—digitally interacting with others in a shared online space—has exciting applications for these kids, he says. He sees potential for sibling visits between kids at home and those in the hospital.

"Even though it's virtual, it's still interacting and engaging more than just over a phone call," he says.

The metaverse could also host facilitated support groups or therapy sessions for kids with certain illnesses or injuries, he suggested. Rather than being limited to who lives nearby, people nationwide could join.

Rafferty's optimistic about the potential for VR socialization for kids who are otherwise isolated in the hospital. "The more that that's normalized," he says, referring to hanging out or attending school in VR, "the less impact that's gonna have on kids who are stuck in the hospital for a long period of time."

Only one-quarter of teens currently own VR headsets—partly due to cost barriers and user experience—so the fully immersive metaverse isn't quite mainstream yet. But parents should stay aware of new advances and applications because their children could be in it, if they're not already, sooner than they think. 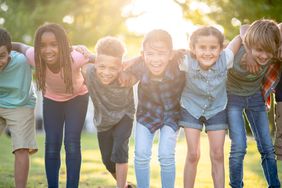