Young children are vulnerable to lead poisoning, which can happen when lead builds up in the body over time. Learn how to spot potential lead exposure and prevent any long-term complications.

Lead is a toxic metal that's sometimes found in older paint, antique toys, certain water pipes, and contaminated soil. It usually enters the body through inhalation or ingestion of a contaminated product. Excessive lead culminates in the body and can cause a host of medical problems affecting the brain, nervous system, and more.

Lead exposure is dangerous to everyone, but young children—especially those under 6 years of age—are especially at risk because their bodies absorb lead easier. Infants and toddlers are also susceptible because they might touch things containing lead (such as lead paint chips from door edges and window sills) and put their hands in their mouths.

It can be hard to spot lead poisoning in kids, as many children don't exhibit symptoms. Signs of lead poisoning can also be attributed to other health issues. Learn more about what to watch for with this handy guide.

How Common is Lead Poisoning?

Lead poisoning is associated with 900,000 deaths per year globally, according to the World Health Organization (WHO), and it's responsible for 62.5% of developmental intellectual disabilities where the cause is not known.

Lead poisoning is more common in developing nations where the use of lead isn't regulated. The risk is also higher for kids living in homes built prior to 1978 (when lead-based paint was banned) and those who live in lower-income housing where the use of lead paint was more common. The Centers for Disease Control and Prevention (CDC) says that 29 million housing units have hazards involving lead-based paint—and young children live in about 2.6 million of them.

The CDC also estimates that approximately half a million American children ages 1 to 5 have blood lead levels above the recommended value. As WHO states, "There is no level of exposure to lead that is known to be without harmful effects."

Lead paint is one of the common culprits of lead poisoning. Children can be exposed through paint chips or paint dust, especially if they ingest it or breathe it in. Although lead paint was banned in the late 1970s, many older homes still contain the toxic metal.

Older or antique toys could also be made with lead, and some traditional medicines (like Azarcon and Greta) can be a source. Lead pipes can also secrete lead into drinking water. Parents who are remodeling or completing building work on their older homes may unwittingly fill their homes with dangerous levels of lead. Note that lead can also pass to babies through pregnancy or breastfeeding.

Symptoms and Complications of Lead Exposure

Most children don't show any symptoms of lead poisoning. But as lead levels are cumulative and build up over time, parents should be vigilant and visit the doctor if they notice any of the following signs in their children.

In the long-term, lead poisoning can cause health problems that can affect academic performance, attention span, and IQ. According to the CDC, they might include:

"Lead exposure also causes anaemia, hypertension, renal impairment, immunotoxicity and toxicity to the reproductive organs," says WHO. "The neurological and behavioural effects of lead are believed to be irreversible." High levels of lead poisoning can even lead to death, although this is rare.

How to Prevent and Treat Lead Poisoning

Thankfully, it's easy to confirm a suspected case of lead poisoning with a blood test using either a finger prick or heel prick. Based on the results, your doctor may recommend a follow-up test with a venous blood draw.

If concerning lead levels are detected, most doctors will urge parents to find and remove lead from the household environment. They may also recommend a diet high in iron and calcium, as well as follow-up blood testing. It's important to detect lead poisoning as soon as possible to avoid long-term effects.

For more serious cases of lead exposure and poisoning, doctors may recommend an x-ray and chelation therapy, which can help remove lead from the body.

Although lead poisoning is a serious threat, it's avoidable for most people. If parents are concerned about possible lead exposure in their homes, they should take the following steps: 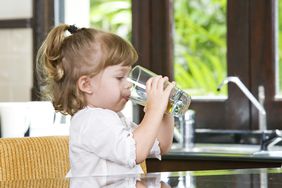