How you engage your children in talks around race can make all the difference in their inclusiveness of others. These are the best ways white parents can lead impactful and meaningful conversations with their kids to dismantle racism.

As a Black mother, while I appreciate the newfound allies and activists in the white community, I do hope they remember this is still a fragile time for the Black community. Police brutality and systemic racism are issues we've been fighting for centuries, and yet there has never been more attention for social justice than in the past couple weeks. Understand the sudden rush of care is at times overwhelming—and disheartening—as again, this is a war so many of your Black mom friends have been fighting for years.

One way to ensure that everyone's commitment to dismantling racism is ongoing, however, is prioritizing raising anti-racist children. Being intentional about how you engage kids in conversations around equality and race is vital to their racial identity, their inclusiveness of others, and their ability to engage in compassionate relationships with others. Here, experts weigh in on ways white parents can work to raise children who are anti-racist and are proactive against perpetuating systems or experiences embedded in racism.

Acknowledge that white privilege is real.

It's important for white parents to teach their children about the advantages they possess simply for being born a white person. It's a critical step in raising anti-racist children. "White privilege is not to say that a white person will not have struggles or adversity, but instead, it should be viewed as an inherent advantage that the person has without doing anything other than having white skin," says Lucinda D. Norman Johnson, a teacher at the Penn-Griffin School For the Arts in High Point, North Carolina. "White privilege is afforded to all white people of all socioeconomic status, gender, geographical location, age, or acknowledgment."

Race matters. In fact, studies show children can begin to differentiate race by as early as 3 months old and can classify others by race between 6 and 8 years old. "If a parent teaches their children not to see color, she is teaching her child not to know the identity of the other person," says Johnson. "When you don't see a person's race, then what you are saying is you don't need to know that person truly."

When working with parents of white children, Whitney C. Hobson, Psy.D., a licensed psychologist at the Resource Group Counseling and Education Center in Towson, Maryland, often hears them discuss times when their child spoke of a racial difference between them and another person in public. Their reaction, she says, is usually to admonish or ignore their child. But there is a better way to handle that situation.

"The inquisitiveness children exhibit is their way of seeking to understand and learn," says Dr. Hobson. "Often, what parents think they are doing in this situation—avoiding embarrassment and ridicule—can give the message to children that race is something to view negatively, something to fear, or something to ignore. This lays a powerful groundwork that can lead to the erasure of the real differences in how race—and skin tone—is viewed and experienced in this society."

Instead, answer questions about differences in skin tone and features calmly. For example, if your child makes a statement such as, "Mommy, that lady's skin is brown, and yours is white," agree with them and ask them a question such as, "What do you think about that?" or "What made you say that?"

And be open to their thoughts and questions. Most importantly, respond with factual information. While noting differences, it is also helpful to point out similarities; this prevents differences from leading to division.

"Listen without judgment so that they are open with you, but correct inaccurate information and stereotypes," says Dr. Hobson. "For example, if your child makes a negative remark about someone with different hair texture, you can say, 'Her hair isn't ugly, sweetie. Her hair is curly, just like your hair is curly, but her curls look different than yours. But she can make pretty hairstyles and wear bows just like you. Just because it is different doesn't make it bad.'"

Start talking to kids about racism early on.

Starting the conversation about racism as early as 5 years old can make all the difference in how kids view the world and others. Don't leave this up to society. "Don't shelter your children from the harsh reality of what racism is. Be deliberate in teaching them about racism and bias," says Johnson.

But being developmentally appropriate is important. "Focus on the helpers and goodness in others for younger children under 10 and begin to educate your child about the history and systemic legacy of racism when they're adolescents, as well as ways to become involved to make changes," says Stephanie Flores-Koulish, Ph.D., associate professor of curriculum and instruction for social justice at Loyola University Maryland.

For young kids, pay attention to how they express their awareness. "Address it both reactively and proactively," says Dr. Hobson. "Reactive looks like being open and interested when it comes up, and proactive looks like speaking to differences in physical features during play or while consuming entertainment in positive and normalizing ways. Both can significantly impact the thoughts and dialog they have around race in the future."

For older kids, advises Dr. Flores-Koulish, "Ask them questions to learn about what they know, what they're being exposed to, how they discuss justice, fairness, and what ideas they have to make a positive difference in the world."

Children are always watching their primary caregiver for guidance and they understand more than you might think. "They look to you for not only what you can provide for them and teach them, but they pay attention to how you do or do not respond to discussions specific to racism," says Danielle R. Busby, Ph.D., a licensed clinical psychologist in Texas and co-founder of Black Mental Wellness, a virtual community dedicated to the mental health and wellness of Black people of all ages.

Be intentional about the modeling you give them and mindful of the language you use. "It is important that if even seemingly harmless stereotypes are presented, you can stop and ask, 'What did you think about that?' or use it as a time and space to talk about the importance of seeking an understanding of diverse groups instead of stereotyping or judging," says Dr. Busby. "Model different ways you and your family can support individuals who may experience discrimination and racism." You can do this through volunteering, donating, or simply showing support.

It's critical to show kids that it is OK to be aware of your emotions and to talk about them. "Are you feeling sad about the current state of events around racial injustice? Name it. Are you feeling frustrated? Are you maybe confused? Name it," suggests Dr. Busby.

It's also OK if you feel like you don't have all the answers, but that doesn't mean conversations shouldn't take place. "We want to teach children the importance of having difficult conversations. Talking with your child about your feelings about the nationwide protests could even be a place to start," says Dr. Busby.

For a Black person, answering questions like "how are you doing" can be a traumatizing burden to explain repeatedly, especially when we're all still experiencing racism every day. Instead, please show your commitment to dismantle racism. Follow up an "I'm sorry" with "you don't have to respond, but I just want to let you know my actions moving forward are going to be to support the Black community and dismantle racism."

Just as hearing the above might make you uncomfortable, doing the research and educating yourself on how to raise anti-racist children might initially make you nervous too. Accept the feeling. As author Brian Tracy once said, "Move out of your comfort zone. You can only grow if you are willing to feel awkward and uncomfortable when you try something new." 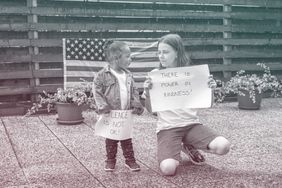