Why You Need to Know Thyroid Disease Symptoms in Kids

Thyroid conditions are relatively common in kids and are totally treatable. But it’s important to diagnose them as early as possible since hypothyroidism can stunt a child’s growth.

I went to get an ultrasound on my heart when I was around 8 years old. For a while, I had been feeling a strange sensation I couldn’t put into words at that age. The ultrasound showed a healthy heart and doctors sent me on my way.

As a teenager, my symptoms got worse. The flutter in my heart was happening much more often, I felt drained all the time, no matter how many hours I had slept, and I often had sweating episodes. In college, just walking from one class to another on campus felt like I walked through a sauna.

After I turned 18, during one of the first regular checkups with my general practitioner, I explained what I had been feeling. (Turns out, the feeling in my heart was heart palpitations.) My doctor drew blood and said he’d check my thyroid, the butterfly-shaped gland in the front of the neck that affects the metabolism, growth, and development. A few days later, he called me to tell me I needed to see an endocrinologist: my thyroid levels weren’t in the normal range. I had thyroid disease.

What is Thyroid Disease?

Thyroid disease is common—it affects about 20 million Americans—but it’s estimated that up to 60 percent of people are unaware they have it. There are two main types of thyroid disorders—hypothyroidism (underactive thyroid) and hyperthyroidism (overactive thyroid).

The pituitary gland in the brain controls the thyroid. It makes thyroid stimulating hormone (TSH). "If your pituitary senses that the level of thyroid hormone is not enough, it's going to put out more TSH to do just that—stimulate the thyroid to make thyroid hormone," says Graeme R. Frank, M.D., a New York-based pediatric endocrinologist with Northwell Health. "High TSH levels can mean your thyroid is not making enough thyroid hormones, a condition called hypothyroidism. Low TSH levels can mean your thyroid is making too much of the hormones, a condition called hyperthyroidism."

Although thyroid disease is most common in adults, it can occur at any age, including infancy, and about 37 out of 1,000 children have it. Kids are more likely to suffer from an underactive than overactive thyroid. (I had the latter.) Untreated thyroid conditions can cause a slew of symptoms. Even more concerning? If hypothyroidism goes undetected in children, it can cause irreversible growth failure—that's why it's important to get diagnosed.

Through the newborn blood spot (heel-prick) test, which screens for various disorders, every single baby born in a hospital in the United States is screened for an underactive thyroid or congenital hypothyroidism. It’s relatively common, occurring in about 1 in 4,000 kids. But it must be treated with medication within the first two weeks of life. “It’s a devastating condition if it’s unrecognized because the brain developing the first two to three years is critically dependent on thyroid hormone,” says Dr. Frank.

What happens if congenital hypothyroidism is untreated or unrecognized? “It can lead to very severe consequences of growth failure and developmental delays,” says Kristin Marie Arcara, M.D., pediatric endocrinologist and associate clinical director of pediatric endocrinology at Johns Hopkins and member of the Pediatric Endocrine Society and the American Diabetes Association. “But thankfully in the U.S., since it’s on the newborn screen, children don’t present with those symptoms anymore. They tend to get picked up and treated immediately.”

Babies with congenital hypothyroidism will usually need medication for the rest of their lives.

When developing in later years, thyroid conditions can present in many symptoms. For younger kids, the most important symptom for hypothyroidism is poor growth. But other symptoms may include constipation, feeling cold all the time even when the weather is warmer, weight gain, dry skin, coarse hair, and lethargy. In more extreme cases, children can have elevated cholesterol, which is “completely reversible once you treat the thyroid,” says Dr. Frank.

Kids who have gone through puberty may have irregular periods with untreated underactive thyroid. “It can actually also cause delayed puberty,” says Yasmin Akhtar, D.O., M.P.H., a clinical associate of pediatrics at the Johns Hopkins University School of Medicine in the department of pediatric endocrinology.

Symptoms of Hyperthyroidism in Children

“Symptoms of hyperthyroidism are much more noticeable in children,” says Dr. Arcara. “I like to liken them to the symptoms of drinking too much coffee.” What that means? Children may have a tremor, be shaky, have a fast heart rate, diarrhea, weight loss, have a hard time concentrating, trouble falling asleep, and poor attention in school. “Sometimes kids may be misdiagnosed with ADHD,” adds Dr. Arcara.

How Thyroid Disease is Detected in Children

A blood test is needed to check the thyroid’s function, but it is not part of routine bloodwork. “A pediatrician would need to have an index of suspicion of the problem,” says Dr. Frank.

That’s why it’s critical to say on top of child well visits from childhood through the teenage years. “Your pediatrician is doing really important things like monitoring height and weight growth and they can tell when there are subtle alterations in your weight or height growth that might signal that there is something going on,” says Dr. Arcara. “They also will be doing the physical exam and can notice things like an enlarged thyroid gland—also called a goiter—which might lead them to do testing.”

But of course, parents can bring up concerns to their child’s pediatrician if they notice symptoms or if they themselves have a history of thyroid disease. “It runs in families,” says Dr. Frank. “If you have a first degree relative with an underactive thyroid you’ve got an increased risk of developing an underactive thyroid at some point in your life.”

If thyroid tests come back abnormal, “then we’d have the pediatrician refer those patients to a pediatric endocrinologist,” adds Dr. Akhtar.

While thyroid disease may sound scary, the good news is it is totally treatable.

Hypothyroidism is treated with levothyroxine, a synthetic form of thyroid hormone that is taken by mouth on a daily basis and generally has no side effects. “It’s very well tolerated, and kids will go back to having totally normal lives as long as they are adherent to their thyroid medication,” says Dr. Arcara.

Finding the right dose is key. “It’s one of the very few things in endocrinology that we can precisely dose,” says Dr. Frank. Doctors will monitor the thyroid levels after several weeks of a patient taking medication in order to determine if the levels are in a normal range—and if not, they will adjust the dose accordingly.

Often kids will have hypothyroidism for the rest of their lives once diagnosed. “But there is a chance, some children may have a transient type of thyroidism which may resolve in time,” says Dr. Arcara. “That is something that certainly your doctor can guide you on whether it’s worth trialing a patient off of the medication to see if they have persistent, permanent type of thyroidism or transient.”

Treatment for hyperthyroidism is a bit trickier and includes three options. There’s radioactive iodine treatment, which is given as a pill and destroys the thyroid within a few months and typically leads a patient to have an underactive thyroid for the rest of their lives. This treatment is usually recommended for older kids. “You are supposed to be isolated for 48-72 hours so if it’s a young child the parent may also be exposed [to the radiation],” says Dr. Akhtar.

A second option is antithyroid medication, which slows down the production of thyroid. In about 25 percent of cases, patients will be taken off the medication after about two years, explains Dr. Frank. But this may have side effects, including skin rashes, pain, achy joints, liver disfunction, and can cause a very low white blood cell count.

Finally, there’s an option for surgery to remove the thyroid which is “very unusual,” says Dr. Frank.

The Most Important Questions to Ask a Pediatrician You're Considering

Why It's Important to Treat Thyroid Disease

It's absolutely critical to treat in newborns to avoid irreversible developmental issues. But aside from uncomfortable symptoms for bigger kids, the biggest concern is the effect hypothyroidism can have on a child's growth. "Certainly hypothyroidism is not the only cause of poor growth in children but it is one of the more common ones," says Dr. Arcara.

That's why it's crucial to evaluate and treat. "If hypothyroidism goes untreated for a long period of time you may not have completely adequate catch-up growth in the longterm," adds Dr. Arcara. "But for most kids, if therapy is initiated promptly, they will have normalization in their growth, so they will have a normal adult height for their family." 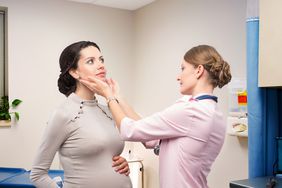 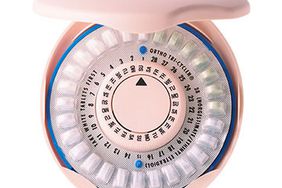