A pediatrician explains what fevers mean and why parents typically don't have to treat them with acetaminophen or ibuprofen.

After receiving undergraduate and medical school degrees from the University of Michigan and undergoing a categorical pediatric residency at Weill-Cornell/NY Medical Center, Dr. Ada Fenick was in private practice for six years. Her practical experience is augmented by national and local work in education and educational scholarship. Dr. Fenick has been the co-editor of the Yale Primary Care Pediatrics Curriculum since its inception, and is now the associate director for Pediatrics in the primary care component of the Biopsychosocial Approach to Health, a third-year medical student core clerkship. She is also honored to serve as Medical Director for Yale New Haven Hospital's School Based Health Centers, and as Medical Director for the Medical-Legal Partnership Project at Yale New Haven Children's Hospital and the CT Center for Children's Advocacy. She is a fellow of the Op-Ed Project. Her research and advocacy centers on pediatric primary care in the service of growing children to be healthy, happy, and productive adults.

A few days ago, I was on a telehealth visit with a parent of a child with a cold and a fever.

"Isn't it bad for him to have a fever?" she asked.

It's a common question I get from my patients' parents. But, while fever can be scary, it's not a problem in itself—it's a sign something is going on in the body. I learned that while I was training as a pediatrician, along with why a fever can actually be a good thing when a person is sick. That's why when my kids (now 25 and 21) were little, I never grabbed fever-reducing medications when they were ill.

Here's what I want parents to know about a fever.

Fevers Are Usually Good for Us When We're Sick

Fever has a bad reputation, but it is typically good for us when we are sick. Our bodies have evolved to rev up our immune response when we get invaded. Various chemicals are made, signaling our brains to raise the set point of the body's temperature—like raising an internal thermostat. That's because our immune cells work better at higher temperature, but the pathogens don't.

I hear concerns about harm coming from a fever, which is defined as any temperature over 100.4 degrees. That's not the case, but any fever may come with a headache or other uncomfortable sensations, and higher fevers even more so. We also lose a little more fluid when we are hotter, and we usually don't feel well either.

The fear people have of any permanent change in the body is unfounded and may stem from the fact that some illnesses we vaccinate for (like measles and meningitis) used to cause a fever and simultaneously could affect the brain or other organs permanently. In those cases, it was never the fever that was the problem—it was the pathogen.

In actuality, the only way to get the body to a temperature that's hot enough to damage it (above 108 degrees) is when the surrounding temperature is too hot, like when a person is stuck in a car with closed windows or exercises in extreme heat—and that's not what your body is doing when it is sick.

So, overall, fevers from illnesses help you, and don't hurt you.

Infants under 3 months: Temperatures should be taken rectally. Any temperature over 100.4 degrees is considered a fever in this age group and parents should call their doctor or go to the emergency room immediately.

Infants 3 months to toddlers: Temperatures should be taken rectally in children under 1, but in children over 1 an armpit (axillary) or forehead (temporal) is fine. A temperature over 100.4 degrees is still considered a fever, but below 102.2 degrees it would be called a low-grade fever.

Older kids: At older ages, you can use any comfortable and reliable way of checking the temperature—armpit, forehead, or in the mouth (oral). For this age group, the same rules hold.

What To Avoid When Your Child Has a Fever

Because of the bad rep, some people try to lower the fever with cold compresses, or a cool bath, but that doesn't change the body's higher thermostat set point. So, instead of really providing comfort, these "remedies" just make the ill person want to dive back under the covers.

Some people turn to naturopathic or homeopathic medications to treat a fever. However, these substances are not regulated, and you don't actually know what you are getting. Studies have found wide variation in dosage and content, making them unreliable.

And another thing to know: the medications commonly found on the shelves for fevers may sometimes be bad for us, too, even though they are effective for fever. Acetaminophen (sold as Tylenol and other brands) and ibuprofen (sold as Motrin, Advil, and other brands) do lower the set point and let the fever go down. However, long-term use of ibuprofen can be a hit on the kidneys, and may be damaging if one is also dehydrated. Ibuprofen is also well known to damage the lining of our intestines if taken in large amounts or chronically. (Most physicians will emphasize using it judiciously—no more than 3 to 4 days without consulting them.)

Acetaminophen, which is broken down by the liver, may be even worse, especially for young children. Studies in young children have linked it to elevated risks for asthma and autism. Unlike modern day medications which are specifically studied in infancy and childhood, when the decision was made to allow acetaminophen and ibuprofen for children and pregnant people, they were considered safe enough to go ahead and give without specific premarketing studies in these groups. Given the emerging information, it seems that more caution for kids is truly warranted with these very common medicines for a simple fever.

When Fever-reducing Medications May Be Necessary

That's not to say children should never use these medications in moderation and at the right dose. I would think of recommending one of these medications for pain, such as bad headaches, sprains, or menstrual cramping. No one needs to be in pain, and if it is truly troublesome, that should be taken care of. While there are concerns as I outlined above, acetaminophen and ibuprofen are among the mildest of pain medications we have and are quite effective.

Another situation where these medicines might be useful is to bring down a high fever if there was a danger of getting dehydrated, like fever with vomiting (where you can't hold down liquids), or fever with mouth sores (where it hurts to drink). When there is a high fever, you lose more fluids just by breathing, so if you are having trouble keeping up, this is a reason to use the medications to treat a fever.

What About Febrile Seizures?

Between 2 to 5 percent of children, usually between the ages of 6 months and 5 years, do get seizures when their fevers spike, called febrile seizures. The good news is that simple febrile seizures typically do not predict anything about the child's future chances of having disabling seizures or their learning or development. They are scary, but we do not recommend treating fevers in children with no history of febrile seizures as there is no real benefit to giving children anti-fever medications to reduce the risk of this happening, according to a 2017 state-of-the-art review. Even for those children who have previously had a febrile seizure, there's no good preventive.

While a Japanese study did find that acetaminophen given rectally could reduce the risk of recurrent febrile seizures within a particular episode of illness, there's no good way of predicting if a future illness will trigger a seizure, and acetaminophen has not been shown to prevent this.

Of course, parents should always talk to their pediatrician if their child ever experiences a simple or complex febrile seizure (the latter lasts longer than 15 minutes, happens more than once within 24 hours, or affects only one side of the body). But unless your doctor specifically tells you to keep the fever down for other reasons, don't use medications to try to prevent a febrile seizure because studies have shown it doesn't work.

What to Know About Febrile Seizures

When a Fever May Be Indicating Something Serious

For infants under 3 months, you should always call your pediatrician or go to the emergency room with any temperature over 100.4 degrees. This level of temperature could indicate a bacterial infection in that age group.

For older children, consider calling the pediatrician if there are any additional signs that worry you. Of course, there's a long list of things that might concern you, but examples might be headaches, sore throat, trouble breathing from the lungs (not nasal congestion), decreased urine or an unusual smell to the urine, or if the fever has gone on for several days. Additional signs like these would help the pediatrician track down what the problem is.

Remember, the problem isn't the fever—something is causing both the fever and the other symptoms! If you are worried, no matter what the temperature is, call your pediatrician for help.

Fevers may be scary, but they are usually just helping your child's body fight off an infection. That's why you typically don't need to rush to get fever-reducing medications—unless there is a fear of a child getting dehydrated or they are feeling pain. Do call the pediatrician for a fever (over 100.4 for an infant, over 102 for an older child) especially if it is going on longer than makes you comfortable, and keep monitoring symptoms to ensure a fever isn't indicating a concerning illness or disease.

It's difficult to have a child sick at home, but the best thing for parents to do is speak to the pediatrician for diagnosis, advice, and prescribed medication, as well as making sure their child stays hydrated and takes it as easy as possible. 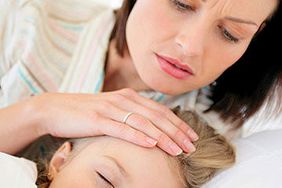 Benefits of Having a Fever 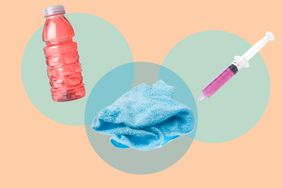 The Dos and Don'ts of Fighting a Fever
Toddler Fever Fears: A Guide for Treating Fever in Kids 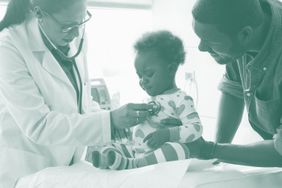 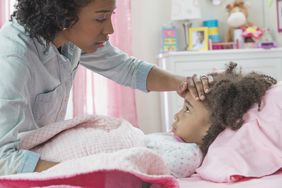