These books from Black, Latino, Asian, Indigenous, and female voices offer an important and different view on history. Here's why we encourage you to read them to your middle school kids.

Early American history has mostly been written by white male authors. These counter-narratives from Black, Latino, Asian, Indigenous, and female voices offer a more relevant and accurate picture of what life was like for all Americans, and are an essential addition to the study of history for the middle grades.

Another plus? Seeing themselves reflected in the context of history is empowering for young people, and learning about each other's perspectives can encourage youth to work for a better future for all of us.

But many of these books cover difficult subject matter. As authors ourselves, we encourage you to review the content beforehand to make sure it is appropriate for your child, and to invite readers to discuss the themes of oppression, racism, and sexism that the stories reveal.

A book described by its author as a "reconciliation" with the racism of the Little House on the Prairie series, Prairie Lotus tells the story of Hanna, a girl who must navigate racism and prejudice in Dakota territory in 1880 after moving there with her white father following her Chinese mother's death.

The Birchbark House by Louise Erdrich

Meet Omakayas, a young Indigenous girl growing up in Ojibwa territory in the 1840s. After a smallpox epidemic ravages her community, the story follows Omakayas and her adopted family through a year of their life, engaging readers with traditional Indigenous ways of living with nature and the changing seasons.

To buy: The Birchbark House

The Witch of Blackbird Pond by Elizabeth George Speare

Explore the ins and outs of a witch trialwith Kit Tyler, a Black Caribbean girl in colonial Connecticut, far from her family and homeland of Barbados. Struggling to adapt to the harsh new environment, Kit finds friendship with Hannah, only to have that friendship disrupted when Hannah is accused of witchcraft.

To buy: The Witch of Blackbird Pond

Lorenzo and the Turncoat by Lila and Rick Guzmán

Continuing the couple's popular series about Spanish involvement in the American Revolution, Lorenzo and the Turncoat finds newly engaged Lorenzo in New Orleans working as a doctor. A hurricane has wrecked the city and his vanished fiancée may be a spy for the British. Lorenzo must search for her to find the truth.

To buy: Lorenzo and the Turncoat

In the heat of the Revolutionary War, Sophia has to choose between staying home to care for her father or venturing out alone to foil a plot designed to hobble American forces, offering a strong heroine in an era filled with tales of famous white men.

Considering our current experience with a pandemic, this fictional account of the real yellow fever outbreak is strikingly relevant. Anderson is also the author of the Seeds of America trilogy, a gripping adventure of slavery and freedom set during the Revolutionary War.

If you're looking for a story to shake up the traditional narratives around the Founding Fathers, this is it. Told from the point of view of three boys, it is both a heartbreaking and important read about slavery, the president, and our nation's history.

Mary and the Trail of Tears by Andrea L. Rogers

This emotional story of forced removal offers a firsthand account of Indigenous internment. Tim Tingle's How I Became a Ghost offers a chronicle from the same period as told by Isaac, a Choctaw boy. Together, the books allow readers a window into the loss and injustice from this period.

To buy: Mary and the Trail of Tears

Elijah lives in Buxton, a small encampment of formerly enslaved people in Canada, just north of the U.S. border. When money is stolen, Elijah must find the thief and get it back in a tale that intermixes a lively storyline with the realities of slavery—and freedom.

To buy: Elijah of Buxton

Set in Virginia in 1861, the scent of freedom from slavery is in the air as the Civil War rages. Calico Girl tells the story of Callie Wilcomb and her family who, with knowledge that Virginia plans to secede from the Union, explore the possibility of escape and the opportunity to create new lives for themselves.

Set during Reconstruction, spunky 10-year-old Sugar is working on a plantation, longing to head north, when Chinese laborers arrive. This novel weaves a story of friendships and cultural crossings into the harsh realities of post-Civil War America—with plenty of page-turning trouble and triumph mixed in.

Ambata Kazi-Nance is a writer, editor, teacher, and mother. Eva Jo Meyers is a transformational facilitator and author of Raise the Room: A Practical Guide to Participant-Centered Facilitation. 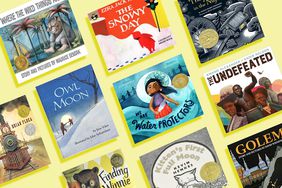