Is Military Service the Right Choice for Your Teen?

If your teen is interested in military service, here's what parents need to know about military recruitment and service.

Joining the military is a big decision that can have long-lasting repercussions—both positive and negative. If your teen is interested in military service as their next step after high school, here's what you should know about military recruitment and service.

Military recruiters are a common sight in high schools across the country, in part due to the No Child Left Behind Act, signed into law by President George W. Bush in 2002, which promises recruiters the same access to students and school campuses that college recruiters have traditionally been granted. It's widely held that recruiters generally focus their efforts on poorer school districts and low-income students (often districts with many Black students), dangling the carrot of signing bonuses and free college to meet their quota—approximately 184,000 people must enroll for military service each year to make up for those who retire or fulfill their contracts, according to Youth.gov.

It's important to understand that Black service people generally don't advance through the ranks like their white peers. While people of color comprise 43 percent of the U.S. military, there is still a history and climate of racism prevalent in the military. According to the New York Times, "Of the 41 most senior commanders in the military (those with four-star rank in the Army, Navy, Air Force, Marines, and Coast Guard) only two are black: General Michael X. Garrett, who leads the Army's Forces Command, and General Charles Q. Brown Jr, the commander of Pacific Air Forces." And, says the NYT, black service people who do become officers are often funneled into logistics or maintenance positions, not "marquee combat arms specialties that lead to the top jobs."

For Black parents, if your teen has hopes of a career in the military instead of fulfilling a contract term and moving on, it's important that they understand the additional hurdles Black members of the military face in regards to advancement and systemic racism present in the U.S. military today.

While there is risk involved in military service—physical injury and death, long-term mental health conditions—for some, the benefits outweigh the risks. Military service can provide teens, not only with monetary gains and financial benefits but may also be a way to ease into adulthood after leaving home.

According to Army recruiter Sgt. 1st Class Robert Dodge, "The military can serve as a stepping stone to allow a teen to be on their own away from parents but still supervised allowing them to learn and grow to become a responsible adult."

Service people can begin their college educations while still enlisted and don't have to wait until their contract terms have ended, allowing them to get a jump on credits toward their degree programs. "While serving, you can still attend college for free earning credits toward a desired degree and you can then take all of your military training/education and it can be converted into college credit as well actually making it easier to attain that degree," explains Sgt. Dodge. "From there, you can either stay in the military (which the degree will help with promotions) or leave once your contract is complete and further your education for free with the Montgomery GI Bill or the Post 9-11 GI Bill or transfer into a civilian career with now real-world work experience and not just a degree and thousands of dollars of debt."

How Parents Can Help Their Teens Decide

If your teen is considering enlisting, it's important to have conversations about their ultimate goals. "I have always asked parents to have an in-depth conversation with their child and help them identify short and long term goals and then apply them to the different services," says Sgt. Dodge. "Research contract length(s) for active, reserve, and guard components and ensure that they understand how long they will be obligated to serve and in what capacities. Along with goals research the jobs and ask a recruiter the process for choosing a job and the likely hood of being able to select the job of choice"

Many parents without a military background may balk if their teen shows interest in enlisting because they immediately focus on the risks involved. According to Candice Lapin, author of Parenting in the Age of Perfection: A Modern Guide to Nurturing a Success Mindset, it's important for parents to understand not only the risks but the benefits as well. "Especially for college-bound teens, there are a lot of financial incentives for joining the Army. If you have a child that has had dreams of military service, you want to educate yourself on the benefits, the career opportunities, and of course any dangers that might be an issue for you as the parent."

Another factor to consider: qualification. According to Military.com, around half of American teens aren't physically or medically qualified for military service. Obesity, asthma, orthopedic problems, and criminal records are just a few of the disqualifying factors for today's military. Also, several common mental health conditions are disqualifying—schizophrenia, bipolar, and some instances of depression and anxiety can all render people ineligible for service.

Military service, while certainly not for everyone, can provide teens with a foundation for pursuing careers in the private-sector or long-term military service. It's up to parents to help their teens weigh the risks and benefits as well as understand the potential impact service can have on their lives. 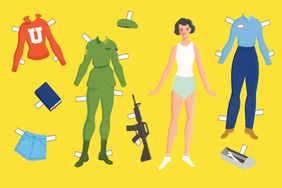