The One-Week Fix for Bad Behavior

My plan was to end my kids' whining, hitting, and tantrums in seven days. But first I had to change my own actions.

Nothing drives me crazier than my son's high-pitched complaints, except Charlotte's tendency to pinch or smack her brother. Sometimes I wonder if my stress level is higher because I'm a single mom. Still, the married mothers I know say every child has a behavior that's like fingernails on a chalkboard. But we may be as much to blame as our kids. "If you focus on what a child is doing wrong, he'll naturally resist, which leads to arguments and worse conduct," explains Bernard Percy, a parenting consultant in Los Angeles.

Percy is right: My kids' annoying tendencies tend to bring out the worst in me. "I can't take this for another minute!" I found myself yelling recently. Then I stopped to think. I couldn't expect my kids to change their negative habits instantly. So I asked experts for their top behavior-modifying tips and agreed to try a different one every day for one week.

My first move was to determine what I've been doing wrong. "The mistake most parents make is responding to the misbehavior, since negative attention is better than none at all," explained Ed Christophersen, Ph.D., clinical child psychologist at Children's Mercy Hospitals and Clinics, in Kansas City, Missouri.

But I was afraid of what would happen if I ignored them. Would Julian's histrionics burst my eardrums? Would Charlotte give him such a pounding that he'd need to visit the E.R.? Dr. Christophersen suggested telling them about my new policy during a calm moment. "Guys," I announced at breakfast, "from now on, if there's whining or bickering, I'm going to pretend I don't see or hear you. Do you understand?"

"Uh-huh," said Julian. "Can I have more juice?" His reaction came later, when we were clothes shopping for Charlotte. "Why do we have to be in this stupid store?" he asked. "I want to go home!" Ordinarily, I would fish a candy out of my purse to keep Julian quiet. But this time, I simply continued sorting through shirts.

Ignoring my son and the glares of the salespeople, I smiled brightly. "Look, Charlotte, they have your size in blue!"

Julian screeched louder and louder. It took all my willpower not to respond. But then, suddenly... silence. He had discovered some key chains that looked like Lego people and played with them until we were ready to go.

Apparently whining loses its appeal when Mom doesn't acknowledge it. Still, I never want to show my face in that store again.

I woke up the next morning dreading the inevitable tantrums and sibling showdowns I'd face that day. But Robin H-C, a family coach and author of Thinking Your Way to Happy!, set me straight: Expecting kids to be bad is a self-fulfilling prophecy. "When you label your child, make sure it's positive so he has something to live up to," she told me.

I tried that when Julian complained that he couldn't find the right blocks to build a house for his action figures. "You're good at making things," I said. "Use something else."

But then--miracle of miracles!--Charlotte stepped in. "Come on, Julian, I'll help you," she said.

"Charlotte, thanks for being such a helpful big sister," I said. Half an hour later, the kids came running in with a shoebox they'd turned into a house using tape and scissors.

"That's a great house," I said, "and I'm so proud of you for playing nicely together." The rest of the day was oddly peaceful. Could the solution really be this simple?

Next, I decided to change my own bad behavior, since Jayne Bellando, Ph.D., a pediatric psychologist at Arkansas Children's Hospital, in Little Rock, pointed out that I was modeling the very thing I wanted to curb in my kids.

While I don't whine at them, I do tend to nag. So during morning madness, instead of imploring my kids to get a move on, I said calmly, "Just reminding you that we have to leave in five minutes or you won't make it on time." Charlotte and Julian gathered their things faster than usual. Then, remembering that Dr. Bellando had told me to label my positive actions, I added, "See, I asked you guys nicely to get ready." Charlotte looked at me as if I'd lost my mind. "That's good, Mom," she said, in the tone one would use to talk someone down from a window ledge. Oh well--at least they didn't wind up needing late passes.

I could swear my kids go out of their way to drive me nuts. I asked Gary M. Unruh, author of Unleashing the Power of Parental Love, if this could be true. "No, kids usually act out for a reason," he answered. "That's why you should point out the feelings that caused your child to misbehave, and then give her a fair consequence." This will help her feel accepted and understood, even as she's being disciplined.

I had the chance to test this approach when Charlotte hit her brother after he accidentally broke her bracelet. Rather than going with my instinct ("It was an accident, and you know better than to hit"), I said, "You must be really mad at Julian for ruining your bracelet."

Charlotte' eyes welled up. "He's always messing up my stuff, and you never get mad at him," she said.

"I need to correct Julian more," I said. "You have a right to be angry. But I need you to go to your room for a time-out. That's what happens when you hit."

To my surprise, Charlotte went straight to her room. When she came out, there was none of her typical post-punishment sulking. I'm tempted to proclaim that "feelings first, discipline second" is the best behavior trick I've ever tried. The one drawback: Its success is dependent on having the patience to implement it.

My ability to handle my kids' outbursts depends on my mood. But there's no such room for variability. "You need to be consistent, make your expectations clear, and avoid your own outbursts," asserted Bertie Bregman, M.D., chief of family medicine service at New York- Presbyterian Hospital, in New York City.

To combat Julian's whininess, I decided the message of the day would be, "You get what you get and you don't get upset--4-year-olds don't whine."

In the morning, he saw we were out of his favorite toothpaste. "I hate the minty kind!" he bellyached.

"You get what you get and you don't get upset--4-year-olds don't whine," I said.

In the afternoon, when Julian was outraged that the Darth Vader book he wanted had been checked out of the library, I shrugged and said, "You get what you get and you don't get upset--4-year-olds don't whine."

"Why do you keep saying that, Mom?" he asked, then settled on his second-choice book.

In the evening, he whined that he wanted chicken nuggets. "You get what you get?..." I began.

Julian interrupted me. "I know, I know," he said, shoving ravioli into his mouth.

I gave this method a thumbs-up. While it may have irritated my son, his behavior definitely improved.

Day 6: But Sometimes Change the Rules

Next I decided to address my kids' bad TV habits. Put simply, they watch too much, battle over control of the remote, and complain endlessly when it's time to turn it off (and do homework or take a bath). I started out letting them watch so I could make dinner in peace but I'd let things slip--a lot. When I explained the problem to Catherine Hickem, author of Regret Free Parenting, she suggested I limit their screen time and create new habits to undo the old ones. She warned me that my kids might react strongly--and negatively--at first. "You simply have to deal with the havoc of resetting boundaries," Hickem insisted.

Late that afternoon, when I told my kids that there'd be no more iCarly while I cooked dinner, I braced myself. Even so, the screaming was worse than I could have imagined. Not knowing what else to do, I took the remote control, left Julian's art supplies and Charlotte's homework in plain sight, and scurried off to the kitchen. Once there, I borrowed a page from Day 1's playbook and ignored the sounds coming from the living room. This was no easy task.

By the time dinner was ready, the kids had calmed down. Charlotte had written her essay, and Julian was busy making a masterpiece with his markers. Surveying the scene, I understood what Hickem meant. Kids will resist change in very unpleasant ways, but you have to let them know you won't back down.

Even God rested on the seventh day, right? You're probably thinking, "Ha! Moms never get to rest," which is true. I wasn't optimistic enough to believe that my kids would let me lie on the couch while they frolicked peacefully all day. Still, we had made amazing progress. So I put off doing the laundry, packed a picnic lunch, and took the kids to the park, where we spent the afternoon reading books, playing catch, having races, and not concentrating on anything except enjoying each other's company. And guess what? No whining, no fighting, no cranky Mommy. I'm sure I'll need to revisit each of this week's strategies repeatedly in the months ahead. But for now, I'm thrilled we all earned a day off for good behavior. 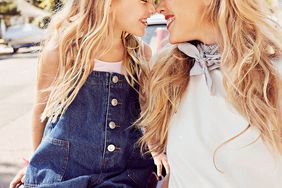