When a wooden child discipline paddle was featured on Amazon's website, it put a spotlight on the topic of corporal punishment at home and in schools. Here's a look at the practice of spanking children from both a scientific and a legal perspective.

Parents typically knock items like toys, books, and shoes off their children's holiday gift lists every season. But while shopping for Christmas presents this year, some Amazon customers were surprised to find a Bible proverb-adorned child discipline paddle listed as "Amazon's Choice."

The solid wood panel was featured as a "Wooden Child Discipline Paddle… to Help Loving Parents Have Obedient Children." It was also inscribed with the words "The Board of Education, Proverbs 29:15," a reference to the Bible verse: "A rod and a reprimand impart wisdom, but a child left undisciplined disgraces its mother."

Customers were understandably confused, and one asked why Amazon was even selling products "designed for child abuse." The seller, The Montgomery Line, replied: "This discipline paddle is simply an effective tool to be used in a loving, yet respectful way to promote the overall child's wellbeing. Caring enough to confront should always be done in a calm and controlled way when the child is defiant, to do otherwise is child abuse."

The item has since been removed from Amazon's marketplace, but the issue doesn't end there. Wooden paddles—and some labeled spanking spoons—are still available under searches such as "spanking paddles" or "child discipline paddles." Some of these products are also marketed under everything from "adult purposes" and sorority/fraternity life to arts and crafts and carpet beating. But despite the product labels, some commenters allude to using a variety of paddles for disciplinary action.

When Montgomery Line's paddle hit the Twitterverse, so did the topic of corporal punishment at home and in schools. As journalist Talia Levin tweeted, spanking at home is permitted in all 50 states, while corporal punishment is allowed in public schools in 19 states, and in private schools in 48 states (except for Iowa and New Jersey).

Mississippi, Alabama, and Arkansas top the list of states where corporal punishment is prevalent. In Florida, where it's also allowed, a principal recently went viral for paddling a 6-year-old student. Certain districts in these states have banned corporal punishment, but more than 800 children in public school on average are being hit daily, according to a 2014 report from the Children's Defense Fund. What's worse: studies show Black students and those with disabilities are disproportionality affected by corporal punishment in schools.

And though spanking has been on the decline in the U.S. among parents, older studies have shown about 70 percent of Americans still think it is an acceptable form of punishment.

Yet dozens of organizations, including the American Academy of Pediatrics (AAP), have partnered with the U.S. Alliance to End the Hitting of Children to put an end to the practice in schools and in homes—and there's good reason for that.

Why Corporal Punishment is Never OK

According to the AAP, corporal punishment is associated with increased aggression in preschool and school-aged children, and increased risk of mental health disorders. The AAP recommends parents do not spank, hit, slap, threaten, insult, humiliate, or shame their children. Instead, it favors healthy forms of discipline like positive reinforcement for good behavior, limit setting, redirecting, and setting future expectations.

"Research has shown that spanking does in fact increase children's stress levels, as well as their risk for a host of future psychological problems," says Noam Shpancer, Ph.D., clinical psychologist and professor of psychology at Otterbein University. "These findings have prompted some researchers to propose that spanking be added to the accepted list of adverse childhood experiences (ACEs) known to predict adult adjustment and health problems, and that we begin to consider spanking a public health concern."

There have been numerous studies linking physical punishment to negative outcomes, and a 2021 report published in the journal Child Development focuses on how spanking can harm child brain development in ways similar to severe abuse. Using MRIs to examine the brain development of children ages 10 to 12, the researchers introduced stimuli to both those who had been spanked and those who had not experienced spanking.

"We found that spanking can undermine the development of conflict solving skills," says Jorge Cuartas, Ph.D., co-author of the study, and early childhood development researcher at Harvard University. "These effects are likely explained by changes in neural function, as our study demonstrates that children who experienced spanking early in life tend to exhibit an atypical brain function in areas that tend to underlie emotion regulation. These are the same regions that show dysregulation in cases of severe abuse such as physical violence and sexual abuse. Spanking might make it more difficult for children to regulate their own emotions and behaviors, ultimately increasing 'bad behavior.'"

Another recent study on twins shows the importance of nurture versus nature in determining behavioral outcomes. "Among twins who shared the same genes but were disciplined differently, the twins who were spanked more were more likely to exhibit antisocial behavior," says Dr. Cuartas. "Given all this research, it's clear that no form of corporal punishment, not even 'spanking,' is beneficial. Conversely, it produces fear and pain in children, with downstream physiological and psychological consequences."

You Hit Your Kid and Shouldn't Have—Now What?

What Needs to Change

While parents can implement positive ways to discipline their children at home from sources like the ACT Raising Safe Kids Program, legislation is also critical to end hitting in schools.

Two bills have been introduced in the U.S. Congress to end corporal punishment in schools that receive federal funding—one in February 2021 and another in June 2021.

The U.S. Department of Education's Office for Civil Rights could also take action against schools that disproportionately use corporal punishment against Black children and children with disabilities. "The Office for Civil Rights has the power to take action against schools and districts that receive federal funds and are violating federal laws that prohibit race and disability discrimination," says Miriam Rollin, J.D., director of the Education Civil Rights Alliance, convened by the National Center for Youth Law. "Since there is no educational benefit to spanking, such disparities are discrimination."

In certain states and districts, parents can opt their children out of corporal punishment. But concerned parents are also encouraged to reach out to their local superintendent, school board, and elected officials to let them know they support bills banning corporal punishment. They can even contact federal representatives to help get it banned nationally. And in the meantime, paddles used for spanking kids should stop making their way on popular online marketplaces.

Parents.com reached out to Amazon for comment but did not receive a response at the time of publication. 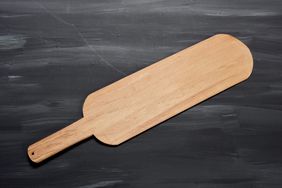