Bedtime. Mealtime. Cleanup. Some days can seem like one kid behavior battle after another. Here's your chance to stop banging your head against the wall and try something new to get your kid to listen.

The first time I saw "1-2-3 magic" in action, I thought my sister-in-law had turned into a wizard. Her 4-year-old was throwing toy trucks at his baby brother, gleefully ignoring her requests to stop. Then she started counting.

By the time she'd reached three, all vehicles were grounded and her kid was calm. "She's cracked the code," I thought. But whenever I started counting with my preschooler, she'd cry instead. Why does a discipline strategy that works like a charm for one parent backfire for another?

"Children aren't robots," says Marti Erickson, Ph.D., a developmental psychologist and cohost of the Mom Enough podcast. Differences in kids' temperament mean time-outs might reign supreme at a friend's house but make things worse in yours. Or the sticker chart that motivates your son does nada for your daughter.

Helping kids learn to manage their own emotions and control their impulses is the goal, so if a technique isn't working, try another one. "Things may get a little worse before they get better, so stick with it," says Jerry Weichman, Ph.D., a youth clinical psychologist at the Hoag Neurosciences Institute in Newport Beach, California.

That's what these parents did, and soon they were reaping the rewards. Take a cue from how they dealt with their kids' behavioral problems to see if a new technique could work for you.

The Problem: Picking Up Toys

"My girls share almost all of their toys, but when it was time to clean up, the older two would always argue about who took each one out," says Reena Morgan, mom of Sareen, 6, Siona, 4, and Samaya, 3. "I used to negotiate with them—Sareen will pick up this one, and Siona can pick up that—but it ended up taking longer to put away the toys than it did to play with them!"

"About a year ago, I made space in an out-of-the way closet and took some of the toys out of circulation and put them there. Does Siona really need all 15 animal figurines at the same time? Does Sareen need 12 puzzles to choose from? I left a smaller selection on the shelves in their play area. Now, every few weeks I switch up what's 'in storage' and what's available. It's made cleanup less overwhelming because there are fewer things to put away. But it also means that instead of negotiating who handles what, I can just say: 'If no one is taking responsibility for this, it's going to be put in the closet.'

"Sareen was responsive to the ultimatum right away, but Siona tested me, so I followed through, storing her Daniel Tiger figurines. When she asked for them, I reminded her that they were in the closet because she hadn't been taking care of them. After a few conversations like that, I no longer needed to explain what would happen if they got left on the floor again. Added bonus: When we rotate toys the girls' eyes light up because the old ones seem new again."

Why it works: Even preschoolers understand accountability, as long as the consequences are clear and consistent, says Dr. Weichman. "Your job is to handle it like a traffic ticket: You see the infraction, you hand out the consequence, and then you move on." This type of strategy also works well for clothes that never make it into the hamper and books that pile up everywhere around the house but the bookshelf.

RELATED: Is Your Child Acting Out—or Just Acting His Age?

The old solution: Reasoning with them

"When our twins were preschoolers, they fought about who got which toy first, who climbed into the car first, and who had to take a bath first," says Alison Page, mom of Grayson and Carter, both 12. "We tried to explain that it would all even out eventually, but reasoning did nothing to assuage their feelings of inequity."

Why it works: "Taking turns naturally plays to a kid's sense of fairness," says Dr. Erickson. That said, remembering who went last for every single time is nearly impossible. Setting up a day-by-day system that's easy Is there bail for blocks in jail? and irrefutable simplifies things for everyone and also works well for deciding who picks the film on movie night or whose topping preference goes on the pizza. Keep track of who chose last by jotting names down on a calendar.

"I lovingly call my son Huxley the Absent-Minded Professor," says Jenna Rabe-Hoy, mom of Riyen, 13, Huxley, 11, and Charlie, 5. "He's a supersmart kid, but if something isn't important to him, it falls by the wayside. In the first months of third grade, he lost four coats and his lunch box and left his backpack at school more times than I can count. I'm big on positive reinforcement, so I tried to reward him with a sticker each time he remembered to bring everything home. But not only did he remain scattered, he would be heartbroken whenever he failed to earn his prize."

"We decided to let him experience the result of his forgetfulness in hopes that it would create a sense of ownership over his stuff. We explained that going forward, we'd buy gear only at the beginning of the year. And we added opportunities for him to earn money so he could replace belongings himself if he needed to. Sure enough, he lost another coat a few weeks later. I felt bad because at the time we lived in the Pacific Northwest and we would still have lots of cold and rain coming up. But he was resourceful, layering on sweaters and hoodies so he could keep warm.

Although I also worried that other parents were looking at me sideways, I decided I just had to let go of that. It took him a week of prepping the garden for spring in order for him to earn enough money to buy a new coat, and there were some tantrums. But he bought the cheapest one he could find and held on to it for the rest of the year. Now he's in fifth grade and hasn't misplaced a big item yet."

Why it works: Kids learn best when they experience the results of their behavior. Too often, our instinct is to shield them. "It's our job to let them struggle a bit and deal with the adversity," says Dr. Weichman. This tactic is equally effective for overlooked homework assignments and being bossy with playmates.

RELATED: Can You Hear Me Now? 5 Ways to Get Your Child to Listen

"When he was 8, my son became a bit of a slug and wouldn't do anything unless I hassled him," says Clint Edwards, dad of Tristan, 11, Norah, 9, and Aspen, 4. "We spent a lot of time bickering about homework and chores. One thing he's supposed to do is clean out the family van each week, but he'd just screw around in there for an hour without accomplishing much. When we tied it to receiving his allowance, if he didn't get paid he'd just shrug it off."

The new solution: Offering a currency he cared about

"Our big breakthrough was when we realized that having the chance to earn screen time motivated him way more than losing money did. He was really into video games and was always pleading for extra screen time. We told him that instead of arguing about whether he should be spending more time on chores and less time on video games, we were going to connect the two. He was thrilled.

Now, he has to hit the same benchmarks every day: finish his homework, finish his chores, and play outside or be creative for 45 minutes. If it all gets done without my having to hassle him, then he earns 45 minutes to play video games. If he wants to have five more minutes with a game? I will point to the front sidewalk that needs sweeping."

Why it works: Some kids are simply more inspired by the possibility of earning perks than they are by the threat of losing allowance or other privileges, says Dr. Erickson. Some other currencies that you could offer include earning an extra bedtime book whenever your nighttime routine is completed without any grumbling or a Saturday playdate after a week of hassle-free homework.

RELATED: 8 Ways to Motivate Kids to Do Chores

The old solution: Repeatedly leading her back to bed

"My own exhaustion and frustration at bedtime peaked when my daughter was 4," says Jennifer Ladisch-Douglass, mom of Kaitlynn, 9. "My husband and I would finish the nighttime routine, but she'd be downstairs a few minutes later. We got her a lovey. We got her a night-light. We used white noise. We let her play in her room. We did silent returns—refusing to engage in conversation or negotiation, just saying 'It's bedtime' and taking her back to bed.

Some nights we'd do that ten, 12, 20 times. My arms ached from carrying her to her room. I was so angry about wasting the whole evening that I'd finish the night crying to my husband."

The new solution: Giving her one pass and a morning prize

"At Kaitlynn's 5-year checkup, her pediatrician suggested we try a 'hall pass'—a physical object she could use once to come downstairs. It seemed silly, but I was willing to try anything. I bought this giant pink swim fin like divers wear and explained that she could use it as permission to come down one time for any reason. If she walked down the stairs after that, she wouldn't get a prize the next morning.

The first few days, she yelled her clarifying questions (Is it okay to go to the bathroom? Can I come downstairs if I have a bad dream?) and used her hall pass almost every night. But I think having to bring the flipper made her think twice about why she was up and whether it was a good enough reason to use her one pass. She rarely came down a second time, and soon even her single visits tapered off. It's crazy what a difference that silly pink fin made."

Why it works: If your kid is getting out of bed 15 times, she's probably just trying to get attention, says Dr. Erickson. The hall pass works because it's a tangible reminder that she has a choice: the immediate reward of attention or the better reward of a morning prize. This kind of reminder also often works for dinners out in restaurants, when you can give your child a one-time pass to leave her seat. 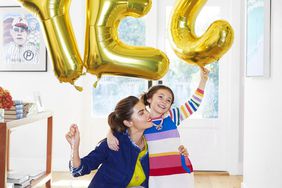