Puberty is hard enough! Here's how parents can make menstruation a lot less scary for their children.

Preparing your child for their first period—and roughly 40 more years of the monthly experience—can seem like a daunting task, but it doesn't have to be. Be open, honest, and positive to make this new puberty body change as easy as possible.

1. Check your own opinion about periods.

"In the history of talking about periods there are all sorts of words like 'curse' and 'suck,'" says Julie Metzger, R.N., M.N., co-founder of Great Conversations, an organization based in the Pacific Northwest that offers classes for parents and preteens about puberty, sexual reproduction, and sexuality. But even if that's how you feel about Aunt Flo, "check in with that storytelling," before discussing the details with your child, recommends Metzger, "because there's a lot about periods that have to do with really amazing and wonderful things like fertility and the opportunity to have a baby."

Instead, consider the fact that you can communicate a different kind of story about what it means to grow up, experiencing normal and healthy body changes. Plus, even if your history with periods has been less-than-ideal, it doesn't mean your child's will be.

"There's this real perception that life is limited by having a period," says Cara Natterson, M.D., pediatrician and author of The Care and Keeping of You series. "Emphasize that this is not a disease: 'Don't think this is a window each month when you're going to be sick.' The biggest message about having your period is you can do almost everything you can do on a day you don't have your period. To empower [children] in that way is really important."

Next, Dr. Natterson suggests reducing the fear of blood. Young people might imagine there's free-flowing blood gushing out of their bodies, so explain that it's not like any form of bleeding they've had before. "I explain that your uterus is about the size of your closed fist, and the lining of your uterus is just the inside of that fist. When you get your period over the course of several days, that lining of old blood and tissue slowly comes out of your body. Usually it's only about three tablespoons of blood total. When you show them in a cup what three tablespoons is, they realize it's not a lot," says Dr. Natterson.

This might include pads, tampons, period panties, and subscription services like MyLola.com, which even sells a first period kit. "I can't imagine buying a single thing without taking my daughter with me," Metzger says. "Explain how there are several options for protecting her clothes when she gets her period—even some you haven't tried yourself—and ask if she wants to go look at some together."

For kids who resist talking about it, Metzger suggests another approach: "You can say, 'I know it's hard for you to connect about this, so just so you know, I got some supplies and they're in the downstairs bathroom. I'd love to talk them over if you need, but feel free to go through it so you know what's there.'"

4. Be hands-on with how to use the supplies.

Young people might be intimidated by period supplies, Dr. Natterson says. "Pads come with the fear of not working or leaking, or just, 'Is it gross?' Tampons are terrifying [because they involve] inserting something into their bodies." So the first step is teaching your child how to use a pad, when to change it, and basic hygiene.

Next, if you're child says they're ready, they can try tampons. "I always want kids to read something before they put a tampon in, whether it's the package insert in the box or a guide in a book," Dr. Natterson says. Whether you want to be in the room or not as your child learns how to use a tampon is up to you and them.

"Some moms are really comfortable being in the bathroom showing their daughters, and that's ideal," Dr. Natterson says. "By being in there, what you're saying with your actions is that there's nothing gross or creepy or inappropriate about this. Some moms are more comfortable on the other side of the door."

5. Empower them to handle the logistics.

"Describing what a period is takes me three minutes, but describing the logistics of a period—how to manage it, how not to be surprised by it, how to use tampons or pads, what to do if you start in school, what to do if you're a swimmer, how to build a pad out of toilet paper when you don't have any supplies—that can take two hours," Metzger says.

"Leaks are the number one question in the classes I teach," Dr. Natterson says. "The biggest lesson is be prepared for the mishaps. When you're younger, periods take you by surprise." To help prepare for every situation, people can keep a little pouch in their backpack with a clean pair of underwear, a couple extra pads, and a pair of pants as an emergency kit. Kids "should be given permission to never have to worry about how they're going to manage their periods," adds Dr. Natterson.

"Also, explain that it's really hard to ignore the physical sensations of moisture that go along with having a period for long enough that you're going to be sitting in a puddle of blood in a chair," Dr. Natterson says. "When we're talking about leaking, we're talking about a small amount. That's a big relief, because they imagine it very differently than what we mean."

6. Avoid focusing on any negative symptoms they may not even have.

"Don't jump in there with a laundry list of things that some people find uncomfortable," Dr. Natterson says. "On the other hand, cramps, bloating, breast tenderness, and mood swings are real."

Your best bet is to just address these issues as they come up. If your child has just gotten their period and is suffering from a stomachache, ask, "Are you feeling queasy?' You might be having cramps. Is this how it feels?" According to Dr. Natterson, "Address it in context, put names to symptoms, and offer the tools to deal with them."

7. Get the men in your life involved in the conversation.

"There are so many ways dads can participate," Metzger says. "Even if they've never had a period, they've done almost everything else on the puberty list—gotten taller, put on weight, had pimples, grown new hair, had B.O., experienced being viewed differently or being embarrassed by the changes," Metzger says. Plus, we want our children to be able to tell Dad they forgot tampons without feeling embarrassed or secretive.

And don't forget to talk about periods with boys, too! "To change the world, let's talk to our sons about periods in a way that normalizes it," Metzger says.

7 Books on Puberty for Boys

8. Teach our children to have each other's backs.

Part of this education is teaching our children they're on the same team, Dr. Natterson says. "They're going to experience periods and they're going to have mishaps and leakage. If you see it in someone else, have their back, even someone who's not a good friend," says Dr. Natterson. "Say, 'Hey, follow me to the bathroom,' or hand them a sweatshirt and tell them to tie it around their waist. Do something you would want someone to do for you."

9. Remind your child that other people have periods, too.

It sounds obvious, but it's worth pointing out." Olympic athletes have periods," Metzger says. So do astronauts, pop stars, authors, teachers, friends, and relatives. "Being a part of that story makes you a human being—and that's cool," says Metzger.

Would You Plan a 'Period Party' for Your Child?
Was this page helpful?
Thanks for your feedback!
Tell us why!
Related Articles

The Conversations You Should Be Having With Your Kids About Puberty and 'Turning Red'
Postpartum Period: When Will Your Period Return After Birth? 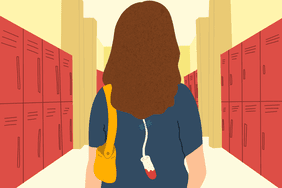 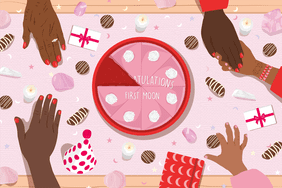