Experts say that kids with dyslexia should be diagnosed as early as possible to get the help they need. Learn what dyslexia is, how children are tested, and the most commons signs of this learning disability by grade.

Percy, a 14-year-old who grew up in England, excelled in nearly every aspect of school except reading. He couldn't seem to make the words on a page make sense. Similarly, 7-year-old Fiona, who lives in Tulsa, had trouble recognizing simple words like cat and the, cried whenever she tried to study spelling lists, and complained of stomachaches so she could go home early from school.

These two kids were separated by an ocean and 123 years, but both struggled with the same condition: dyslexia. In 1896, Percy was one of the first patients described in medical literature who battled "word-blindness," and Fiona was evaluated in 2019. Fortunately for her and the millions of other children in the U.S. with this learning disability, we know much more now than we did in Percy's time about how to recognize dyslexia and teach kids to become confident readers.

5 Myths About ADHD, Dyslexia, and Other Learning and Attention Issues

"Our understanding of dyslexia has taken a quantum leap forward," says Sally Shaywitz, M.D., codirector of the Yale Center for Dyslexia & Creativity and author of the newly updated Overcoming Dyslexia. "Scientific advances have added a depth to our knowledge that was unimaginable just a few years ago." Research proves that identifying the problem early is crucial. Providing special support for kids starting in kindergarten is twice as effective as starting in first grade. Even if your child is years away from learning to read, it's important to know what to look out for—and how you can help.

Dyslexia is a learning disability, one which affects millions of people worldwide. People with dyslexia have difficulty reading and spelling. Learning a second language is also hard; however, as an article from The Yale Center for Dyslexia and Creativity points out, this is not due to a deficit in the knowledge or intelligence. Rather, it is caused by condition or disorder, one which affects comprehension and processing skills.

Many of us have misunderstandings about dyslexia, assuming it's caused by vision problems (it's not) or that writing letters backward is the hallmark of the condition (ditto). It can't be chalked up to laziness either, and kids won't just outgrow it. Defined simply, dyslexia is difficulty attaching letters to the sounds of spoken language. That's why the typical ways of teaching kids to read—the Bob beginning-reader books that focus on letter sounds and phonics worksheets that help older kids put together words—are stumbling blocks for people who have dyslexia. They have trouble pulling apart a word into its sound parts (phonemes) and grasping, for example, that ph sounds like f.

Neuroimaging has shown that systems in the brains of dyslexic children are inefficient at linking the way a word looks with how it sounds. The kids also rely on different parts of the brain to process the print on a page than neurotypical children do. These alternate routes can still work, but much like a detour through an unfamiliar neighborhood, it takes much more energy, attention, and time.

How Early Can the Signs of Dyslexia Be Spotted?

While many assume dyslexia cannot be "spotted" until one learns to read, the signs of dyslexia may actually appear earlier. Some children can (and do) demonstrate symptoms at or around 3 years of age. Some of the earliest signs of dyslexia include:

What Are the Causes of Dyslexia, i.e. Is Dyslexia Genetic?

Dyslexia, which accounts for 80 to 90 percent of all learning disabilities, does have a genetic component. This means that children of dyslexic parents are more likely to develop the disability than other kids. However, it can also be caused by other factors, including fetal exposure to harmful chemical and/or exposure to stress at a young age.

How is Dyslexia Diagnosed?

The best person to spot the early signs of dyslexia, even before your child learns their ABCs, is you. "Kids as young as toddlers can pull apart words and understand that bat and sat rhyme because of the sound at," Dr. Shaywitz explains. Children with dyslexia don't pick up on that connection, so seek help if your preschooler has trouble rhyming or remembering lyrics.

In early elementary school, kids may complain about going to school, performing remote learning tasks, or doing homework, and as they get older, they'll resist reading out loud and have trouble sounding out unfamiliar words.

Your child's teacher should also be on the lookout for signs that something isn't right. In addition to tracking kids' reading progress, schools are supposed to evaluate for signs of dyslexia as early as kindergarten. If your child's school doesn't, contact the principal. (It's a good idea to do so via email, copying your child's teacher, so you have a paper trail in case the school doesn't provide the support your kid needs.) Screenings typically take only a few minutes and test things like a child's ability to sound out a nonsense word.

"When you evaluate and diagnose kids early, you help them to like school and stay confident," says Sharon Vaughn, Ph.D., professor of special education at the University of Texas at Austin and executive director of The Meadows Center for Preventing Educational Risk.

Unfortunately, though, dyslexic children usually aren't identified by their schools until they're in third grade or later. How can such a common issue be so frequently missed? "Teachers are often not up-to-date with the latest research," Dr. Shaywitz says, and only about one in six general-education teachers feels very prepared to teach students with mild to moderate learning disabilities, according to a survey of 1,350 public-school teachers in the U.S. Add in the current constraints of remote learning and the condition becomes easy to overlook.

I Thought My Son Was a Slacker, But It Turned Out He Had a Disability

What Dyslexia Treatment Options are Available—and How Else Can You Support Your Kid?

If dyslexia interferes with your child's academic progress, they are eligible for extra support at school. There is no "cure," and treatments that promise a quick fix rarely deliver, Dr. Vaughn says. However, a variety of methods and programs have been shown to improve children's reading ability, and they all emphasize teaching dyslexic children how to sound out small, simple words and then how to take apart bigger words, along with memorizing sight words. Parents and schools that work together—both with reading practice and by ensuring that kids aren't burning out from spending too much time struggling with homework—provide kids with needed support. When Fiona, for example, received one-on-one reading help, she began to catch up with her classmates.

However, with laws that vary by state, misunderstandings about what dyslexia is and isn't (even among educators), plus other concerns such as staffing and budgets, navigating the system can be confusing. The bottom line: The federal Individuals with Disabilities Education Act specifically covers dyslexia, and some states have more detailed laws that lay out what children are entitled to.

Typically, accommodations for a child are defined in an individualized education program (IEP) or a 504. It might include things like receiving additional time during tests, getting verbal instead of written ones, and having one-on-one or group meetings with a specialist. These adjustments allow students to show their ability, not their disability, says Dr. Shaywitz.

Specialists, teachers, and parents work together to define these legally binding documents. Consider asking a friend or a representative from a learning-disability advocacy group to attend meetings with you, take notes, and ask questions.

Often, parents of children with special needs don't realize just how many resources are available to them. If you disagree with the educators' plans, or if your concerns aren't being addressed, it's your right to speak up, respectfully. You might say, "We all want to make the best decisions for my child's education" and build consensus from there.

If your child is diagnosed, keep in mind that people with dyslexia have other strengths. Research shows that many people with dyslexia are especially good at finding things that are out of place (they show more activity in the part of the brain related to quick surveys of a large space—a skill that's useful for a detective spotting clues or an astrophysicist locating a black hole). Some organizations specifically recruit people with dyslexia. One British intelligence agency prizes dyslexics' talents in its anti-terror work. No matter what your child wants to be when they grow up, dyslexia doesn't have to limit them."You're their champion," says Dr. Shaywitz. "Share your confidence that they'll succeed, and they'll succeed."

What Are the Best Ways to Fight the Stigma Around Dyslexia?

Some parents and schools hesitate to evaluate and diagnose kids for fear that the label will be a permanent stigma that holds them back. However, kids notice they can't do what their peers can, which has made nine out of ten people with dyslexia feel anxious, stressed, or embarrassed, finds research from the advocacy and education nonprofit Made By Dyslexia. Four in five dyslexics say that finally understanding their disability helped them persevere in school and beyond. "Anxiety comes from not knowing," says Dr. Sally Shaywitz. "The most important thing is to tell kids, 'What you have has a name, and a lot of people who are very smart have this. You may be a slow reader, but you're not a slow thinker.'" Celebrities with dyslexia, like Keira Knightley, Whoopi Goldberg, and Tim Tebow, can also help show kids that they can have a bright future.

Know the Signs of Dyslexia at Every Age

A version of this article originally appeared in Parents magazine's January 2021 issue as "The New Thinking About Dyslexia."

What Is Dysgraphia? When Bad Handwriting Is a Sign of Something More Serious 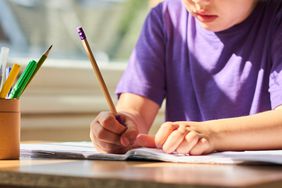 The Cost of Diagnosing Your Child's Learning Difficulties: What Parents Need to Know