The Truth About Lying

All kids tell whoppers sometimes. The way you handle it can determine whether the fibs fade or become a big, fat problem.

Evie Spengler is a born storyteller. Nabbed standing on a step stool trying to open the front door, the quick-thinking 2-year-old claimed she was really locking it. "Fiona 'unwocked' it first," she explained, insisting that the family dog had been escaping. "She has all kinds of crazy stories," says her mother, Jennifer, of La Jolla, California. "If she wants a Hello Kitty Band-Aid, she'll say she's bleeding because a big bunny kicked a ball at her. If she makes a mess, she'll blame her older sisters, even when they're at school. My husband and I can laugh about her tales in private, but we hope they're not a sign of bigger dishonesty to come."

Child-development experts used to be unsure if young children were capable of telling a lie. Sure, they could pretend, joke around, report things incorrectly. But deliberately attempt to deceive another person? Now they know what many parents already suspected: All kids do it. Victoria Talwar, Ph.D., a leading researcher on the subject at McGill University, in Montreal, says that the act of manipulating the truth for personal gain "is a developmental milestone, much like learning to get dressed by yourself or to take turns." Indeed, studies show that bright kids (who are capable of making up a story and getting others to believe it) can pick up the skill as early as age 2 or 3. And their peers catch up quickly: By age 4, Dr. Talwar says, it's game on—all children stretch the truth at times.

Fortunately, just because your young child is a frequent fibber doesn't mean they'll grow up to be a big, fat liar. However, you do need to nip this bad habit before it becomes ingrained. Freaking out and screaming at your kid or punishing them won't discourage them—they may simply become a better liar to avoid getting caught the next time. Instead, follow this approach at each stage of a tall tale.

Before the Spin Begins

You shouldn't wait until you catch your child lying to start discussing the importance of truth and consequences. They'll be more likely to listen to you when they're not on the defensive.

Read all about it. Books can help introduce the subject in a way that doesn't seem accusatory. Try Princess K.I.M. and the Lie That Grew, by Maryann Cocca-Leffler, or Tell the Truth, B.B. Wolf, by Judi Sierra. You can also share stories about your own childhood lies. "I told my two kids about the time our neighbor yelled at me for stealing grapes from her yard when I was 7," says Carleton Kendrick, a family therapist and the author of Take Out Your Nose Ring, Honey, We're Going to Grandma's. "My mother defended me because I told her I had been playing hide-and-seek under the grapevines. But I had really taken the fruit. I felt so guilty about turning her into a liar that I ended up confessing everything."

Set an example. Kids learn about honesty from you. Think about the message you're sending the next time you concoct an excuse to stay home from work or cancel plans with your in-laws. Even the best-intentioned lie can easily boomerang.

Explain about exceptions. By age 7 or 8, kids are starting to understand the nuances of "prosocial," or white, lies. These are intended to protect another person's feelings (like telling your aunt you love her present even if you don't). While many experts believe that good intentions mean these non-truths are acceptable, you should make clear to your child that they're a rare exception to the honesty rule.

When There's a Whopper in the Works

You find an elaborate drawing, made in permanent marker, on the bedroom wall. Uh-oh. The culprit knows they're in for it. Can't you just see their little brain toiling to come up with a way to wriggle out of trouble? Even if you sense a con job coming, it's not too late to help them come clean.

Stay calm. Kids are more likely to lie when they fear your response. In the past, when her daughters, Anya, 4, and Elsie, 2, squabbled loudly, Denise Pearson, of Fort Collins, Colorado, would march into the room and shout, "What's going on?" In a panic, Anya would falsely claim that her younger sister had fallen down—until, after Pearson's questioning, Anya finally fessed up that she had, in fact, pushed Elsie. Now Pearson simply asks, "Why is Elsie crying?" in a normal tone of voice, and the truth comes out. "If Anya admits that she got angry because Elsie took her toy, I'll say, 'That's frustrating. Why don't you get a different toy to trade with her?'" Pearson explains.

Avoid setting them up. There's no point in asking, "Who ate all the potato chips?" when the bag is empty and your child has greasy fingers and lips. You may want to see if your kid will come forward, but it's not a fair test. Instead, try saying something like, "I see you wanted to have a snack. Please ask next time. If it's not too close to dinner, you'll be able to have a few. Now let's wash up."

Give kudos for honesty. Rewarding positive behavior is the best way to make it happen again. When your 5-year-old owns up to accidentally knocking over their big sister's dollhouse, praise them for telling the truth. That doesn't mean they get off the hook, though. They still have to clean up the mess and apologize, notes Annie Zirkel, a licensed professional counselor in Ann Arbor, Michigan.

Focusing On Your Kid's Bad Behavior Won't Help Them Reach Their True Potential: Here Are 6 Things to Do Instead

After the Truth Comes Out

When your child purposefully lies to you, it can feel like a slap in the face. However, their dishonesty doesn't mean that they're a bad kid or that you're falling short as a parent, so it's important that you avoid overreacting.

Forgive toddler fantasies. A young child's lies are often just wishful thinking. "If your kid says, 'There's a pony in the backyard,' smile and say, 'Wouldn't that be fun?' and then move on," says Elizabeth Berger, M.D., a child psychiatrist and author of Raising Kids With Character.

Tone down the accusations. If your child refuses to be honest about an incident, avoid an inquisition. "Very few people will fess up to a lie when they feel pressed, and that includes kids," says Jennifer Kolari, author of Connected Parenting: Transform Your Challenging Child and Build Loving Bonds for Life. Instead, you can say, "I love you, and I want to understand what happened, but some parts of your story aren't making a lot of sense to me. Why don't you take a little time to think about it some more, and then we can talk again." Sooner or later, they'll probably reveal the truth.

Teach the art of an apology. Let your child know that they can make amends for their dishonesty with a simple, "I'm sorry, Mommy." A lie, after all, is merely a mistake. So when they express genuine remorse, it's your job to display compassion and forgiveness in return. "With this approach, there's a great chance that you'll raise a reasonably truthful and responsible child," says Zirkel. You'll notice she said "reasonably." Hey, at least she's being honest.

When the Truth Hurts

By the time your child is a preschooler, you can start teaching them how to be honest without being hurtful toward others. "A gracious tone and a smile go a long way toward accomplishing that," says Louise Elerding, author of the You've Got Manners! book series for kids. Be prepared to practice appropriate responses for different scenarios at home so your child knows how to handle them in real life.

What they're tempted to say: "This isn't what I wanted!"

Parent pointers: Before gift day, take turns giving random items to each other and then showing your appreciation. When they hand you an old toy, say, "Thanks. How nice of you to think of me." Then have them try it. For a school-age child, challenge them to find something positive (and also truthful) to say about the present, whether it's a banana ("Yellow is a very cheery color") or one of Daddy's ratty old sweaters ("Wow, it feels soft against my skin").

You're having dinner at a friend's house, and your kid is a picky eater.

What they're tempted to say: "Yuck. That food looks gross!"

Tactful alternative: "No, thank you."

Parent pointers: If the offending food has already been dished out, tell your child to say nothing at all—and refrain from making a sour face. Quietly suggest that they take one bite or simply eat other things on the plate. You might also ask your friend ahead of time if you can bring some fruit or yogurt to be sure there's at least one thing they'll like.

Another preschooler invites yours over for a playdate, but they doesn't want to go.

What they're tempted to say: "I don't like playing with you."

Tactful alternative: "I have to ask my mommy."

Parent pointers: This gives you a chance to find out what really bothers them about the other child—and help come up with a polite way to decline the offer. 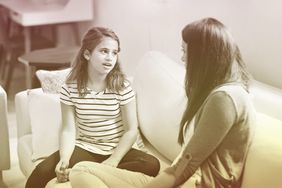