Children can experience a range of emotions, from sadness and anxiety to stress, anger, frustration, and fear. Learn how to help them cope by stepping into their shoes.

My 5-year-old daughter, Violet, was midway through kindergarten when she became obsessively worried about missing the bus. We've never actually missed the bus—we always pick out her clothes and pack her backpack the night before, and allow plenty of time for getting dressed and eating breakfast. But it didn't matter how organized we were or how well the rest of the morning went. In the final five minutes, when I needed my big girl to put on her coat and shoes while I strapped her younger sister into the stroller, she'd melt into a wailing puddle of frustration. I couldn't figure it out: Why was she was so fixated on missing the bus but unable to do the one simple thing to ensure that wouldn't happen?

"Anxiety can make us freeze," says Janet Lansbury, author of No Bad Kids, who teaches parent-education classes in Los Angeles. "Yes, most kids can handle getting their coat and shoes on without help by kindergarten, but that ability is irrelevant when they're panicking." After talking to Lansbury, I realized how overwhelming the coat-and-shoes task felt from Violet's perspective. Just as her bus worry peaked, I stepped away to focus on her baby sister, leaving her alone in our mudroom to wrestle with zippers and Velcro while I got the stroller sorted in the garage. Then I came back and got annoyed when she wasn't ready yet, which made both of us more stressed.

Of course, the whole reason I wanted her to put on her coat and shoes by herself was that I felt daunted by the challenge of getting two kids out the door. "We have a very human tendency to approach any situation with the assumption that the other person is making things hard for us," says Lisa Damour, Ph.D., a Parents advisor and author of Under Pressure. "We know why we're doing what we're doing, so we figure it must be the child who isn't handling this well."

The next morning, I tried a different approach. As we entered the mudroom, I got down at Violet's level. "I need to put Beatrix in the stroller, but then I'll come back and help you get ready," I reassured her. "Do you want to start putting on your shoes?" She nodded, and by the time I'd finished with the baby, she was standing proudly with shoes, coat, backpack, and mittens all in place. I didn't need to put Violet's shoes on for her—I just had to put myself in them, so to speak, so she'd know she didn't have to manage the exit scramble alone. You can't stave off every meltdown, but seeing frustrating situations like these from your child's perspective will help you handle them with confidence.

What to Do If Your Child Refuses to Share Their Toys

Your Take: Your 3-year-old has been anticipating a playdate with their best friend all day. You've put away their most special toys and talked about sharing. However, in the middle of the playdate, your child refuses to share anything. What happened?

Your Child's Take: Your child is excited to see their friend and knows that sharing is part of the deal. But now they're realizing how much they don't like someone else touching their stuff. Your child may worry that sharing a toy means the friend will get to take it home—or your kid's grabby behavior may just mean they're getting bored. "Not sharing doesn't mean your child is selfish or unkind," says Parents advisor Wendy Mogel, Ph.D., author of Voice Lessons for Parents. "They may just need to move on to a new activity."

The Fix: "The moment when sharing breaks down is your cue to suggest a new game or take the kids outside," says Dr. Mogel. A change of scenery should reset their moods pretty quickly. If not, know that "taking turns" is an easier concept for kids to accept than sharing, says Parents advisor Eileen Kennedy-Moore, Ph.D., author of What's My Child Thinking? "Have them count to 20 or sing a song; when they finish, it's the other kid's turn with the toy."

What to Do If Your Child Acts Up In a Restaurant

Your Take: You picked a place that has a children's menu and ordered the mac 'n' cheese. Now your 5-year-old is sobbing because it's curly noodles, not elbows. Why do you even leave the house?

Your Child's Take: At home, you never ask them to sit at the table for an unspecified amount of time before the food arrives. And the mac 'n' cheese always looks exactly like what they expect. Now they're sitting in a grown-up chair that's too big or low for them. "Everything about a restaurant is unpredictable to kids who don't have a good grasp on how long things might take or why food looks and tastes different there," says Dr. Damour.

The Fix: Talk ahead of time about the restaurant routine: where you'll sit, how you'll order from a menu, and what the food may be like. If you don't know, it's fine to say, "We'll be surprised! But you won't have to eat anything you don't want." You should also ask your child "What do you want to do while we wait?" This lets them know that waiting is part of the deal. You can also bring a snack or feed your child something at home so they're not desperately hungry.

If a meltdown happens despite your best-laid plans, take your child out to the parking lot for a break. Once they've calmed down say, "I see you're frustrated that the meal is taking so long and you're having trouble waiting. It's not OK to disturb the other people in the restaurant." If they're ready to go back inside, remind them how they can handle the wait: "You can make a picture with the stickers we brought." Otherwise, just get your food to go. But don't frame it as a failure or punishment, says Dr. Kennedy-Moore. "Say, 'We'll eat at home, and you can try eating at the restaurant again another day,' so you leave the door open for better behavior in the future."

What to Do If Your Child Has the "Gimmes!" at the Grocery Store

Your Take: Your 2-year-old has picked up a colorful box of... tampons. Now they refuse to leave the store without them. (Yes, this scenario is based on a true story.)

Your Child's Take: You get to pick out anything you want and put it in the cart, but you want them to sit patiently and not touch while tons of cool things whiz by. Also, they have no idea how long this trip is going to take or why they can't eat the cereal them, at least not yet.

The Fix: Set expectations before you leave the house. If it's just a quick trip, say, "We're only going in for XYZ," and involve your child in helping you find items on that list. On the other hand, if you're meandering around Target on a Saturday afternoon and might buy an extraneous throw pillow or two, consider letting your child spend a few dollars as well. "If I'm making impulse purchases, it's not really fair to expect my kids to have total self-control," says Dr. Damour.

When your child gets fixated on an item that's beyond his budget or the scope of your shopping trip, you can feel good about saying no. "It's OK for kids to want things, but they can also learn that wanting doesn't always lead to having," says Dr. Kennedy-Moore. Toddlers don't understand that money isn't unlimited, so you can just say, "Not today!" It may also be helpful to acknowledge why he wants it: "I can see why you like that. It's so shiny!" If your gets upset, verbalize that frustration: "You wish we could take it home with us." Another smart strategy is to engage in his fantasy about the item: "Wouldn't it be fun if we could buy all the stuffed animals in the store! Where would we put them all? Your bed would be so crowded."

What to Do If Your Child Freak-Outs About Dogs, the Dark, Bugs, and Other Like Things

Your Take: You've demonstrated over and over to your 3-year-old that the neighbor's poodle won't bite or that there really aren't any monsters under the bed. But they still go into hysterics when faced with these irrational fears.

Your Child's Take: Your child can't fathom why you're so calm when that dog is so big and so loud. Dr. Damour puts it in perspective: "I'd be anxious if anytime I walked outside I might encounter a horse that wanted to put its nose and teeth near my face!" Fears grow along with your child's imagination. Now they can imagine what might be under the bed or in the toilet. But they don't know enough about the world to understand why, say, an alligator is real but a monster isn't, or be sure that neither of them will be hiding in a dark room.

The Fix: Avoid conveying your own anxiety. "If you pick your child up whenever you see a dog, you're letting her know you're worried too," says Lansbury. "Just stand next to them so you can block the dog with your body." For automatic-flushing toilets, put your hand or a Post-it over the sensor.

That said, no matter what you do don't dismiss your child's fears or try to talk them out of it. "If you are dismissive of your child's fears, they will feel like they need to keep an even tighter grip on it because you aren't getting it," says Dr. Damour. Acknowledge it as matter-of-factly as possible: "You're afraid of the dark? Well, let's figure out what to do because it gets dark every night." Follow up with increasingly playful questions: "Is the monster furry? What sound does it make?" You won't make her fear more real by validating it; you'll let your child know it's OK to vent their feelings and may transition the fear from scary to silly. Then, build confidence through baby steps. If you've been lying down with your child until they fall asleep, for example, sit in a chair for a few nights, then outside the door. "Do it gradually, but stay the course," says Dr. Kennedy-Moore. This lets them know that you believe they can cope with the challenge, even if it's tough at first.

A version of this article originally appeared in Parents magazine's May 2020 issue as "Think Like Your Kid." Want more from the magazine? Sign up for a monthly print subscription here. 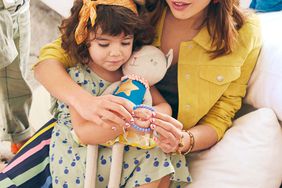 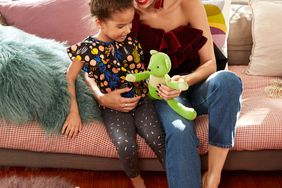 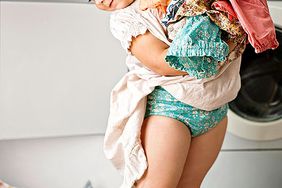