Learn what's behind her erratic emotions and how to go with the flow.

My 7-year-old daughter, Rosie, rolls her eyes when I ask her to set the table. "In a minute," she tells me. I stand beside her, waiting. "Why can't Ben do it?" she whines. I remind her it's her job, not her brother's. "Fine!" she yells. "I'll do it. But I hate setting the table!" Minutes later, she says I'm the best mom in the world.

Hello, emotional roller coaster! It's common for kids ages 7 and 8 to act irritable and unpredictable. Pre-tweens feel more stressed about school and friendships. And the hormones are just starting -- even if you haven't noticed physical changes yet. Try these tips to defuse her mood swings.

The Mood: Sullen and Sad

You ask your son how school was and he says "fine" in an irritated tone that lets you know his day was definitely not fine. But his answers to your follow-up questions are just as snippy. It's common for children this age to start clamming up about their problems, whether they're being teased by other kids or they're having trouble academically, says Myrna Shure, Ph.D., a developmental psychologist and author of Raising a Thinking Preteen. The key, she says, is not to push them while they're sulking. Instead, say something like, "It sounds as if you're not in the mood to talk. I understand, but I'm here if you need me." Later, in a more relaxed moment before bed, ask if something happened that he wants to talk about. Or, inquire while you're doing a fun activity together over the weekend, since it can be easier for kids this age to bring up tough topics when they're involved in something else.

The Mood: Oversensitive and Dramatic

At the family reunion, your daughter falls and skins her knee. You know it stings, but she's carrying on like it's the end of the world. Finally you say, "That's enough crying. You're okay." "I'm not okay!" she snaps back, and wails even louder. Next time, resist the urge to point out that she overreacted. Instead, acknowledge her feelings and try to be empathetic, says Jennifer Cassatly, Psy.D., a Los Angeles clinical psychologist who works with children. "Say something simple like, 'I know that your scrape must hurt.' Then give it a kiss and redirect her attention," Dr. Cassatly suggests. "If other people are around, say, 'Let's take a walk' and remove her from the situation."

Whether his younger brother accidentally destroyed his most-treasured Lego creation or you're late to pick him up from an activity, don't be surprised if his reaction is a toddler-like tantrum, complete with yelling and stomping feet. Even the smallest slight can cause some children this age to explode, experts say. Your job: Stay calm. "If you get angry, it could escalate into a power struggle," says Parents advisor Michele Borba, Ed.D., author of The Big Book of Parenting Solutions. Since the middle of a meltdown is never a teaching moment, simply let him know you recognize his feelings by saying, "Looks like you're upset." Then you can suggest, not instruct, that he try taking deep breaths. When the time is right, show your child ways he can decompress. Create a space where he can go when emotions are running high -- like a beanbag chair in his room. Show him how picking up a book and reading or plugging in his iPod to listen to his favorite music can have a calming effect. Says Dr. Borba: "If you teach your child how to cope with his emotions now, that will help him for the rest of his life."

The Mood: Argumentative and Opinionated

She "hates" soccer practice and doesn't want to go. The anniversary party the family has been invited to is "so borrrrring." Or perhaps, like my daughter, Rosie, she resists every time you ask her to do something. As children test the limits of their independence, they're going to have strong views and yes, push back when you make requests. If your child is saying that something is "stupid" or "boring," don't take the bait, says Janet Sasson Edgette, Psy.D., a psychologist and author of The Last Boys Picked. Just tell her, "I'm sorry that you feel that way," and move on. When it comes to doing chores, homework, and other requests, you can avoid fights by establishing the expectations and consequences in advance.

Originally published in the January 2014 issue of Parents magazine. 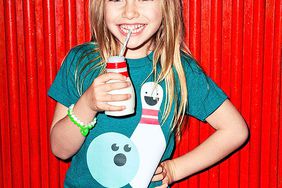