Sometimes things that seem off to parents about their child's behavior are developmentally appropriate. Find out if your kiddo's actions are typical, and when it's time to get help.

We learned our 5-year-old had been busy testing out her burgeoning writing skills on the leather seat in the third row of our SUV when my husband climbed back there with a vacuum attachment at the car wash. Of course, she'd used pen to scrawl an SOS message that, apparently, couldn't wait for a piece of paper: "Eat dinner." I guess she was hungry.

When we expressed that writing on the car was not cool with us, my kindergartner had a full-on meltdown. There were tears. There was screaming, stomping of feet, and wait, did she just hit herself in the face? My vexation over the state of my Suburban quickly turned to concern. If our daughter was hitting herself, surely there was a bigger problem here. Did it have something to do with her writing on our car? Was she OK?

A quick Google search of "why does a child hit themselves when upset?" yielded some comforting results. It turns out a child hurting themselves out of frustration, or when their feelings are overwhelming, is pretty common. "They might feel ashamed, embarrassed, or angry at themselves for the role they played in the situation. Hurting themselves may be a way to express the stress and blame themselves at the same time," according to KidsHealth.org.

"We still love you, honey," I reassured my daughter now, adding, "We all make mistakes." Like, ahem, assuming our kids are exhibiting really alarming behavior when in fact, they are doing something developmentally appropriate.

Our experience got me wondering what other scary behavior parents out there might be worrying about, that is totally typical. So, I talked to child development experts and found out that plenty of behaviors that unnerve parents are, in fact, right on target with typical development. Read on to find out why your child may be acting out, and when to seek help.

Has your kiddo ever told you they hate you? Boy, does that sting, but Ari Goldstein, Ph.D., an educational psychologist, and co-owner of North Shore Academic Solutions in Deerfield, Illinois, says, "Before the age of 7, kids do not have a strong filter." He explains that since they lack social skills, younger children don't understand how their words will impact another person. So if your child is making hurtful remarks, it's typically no cause for concern.

You can try telling them that the comment is not nice, and how it makes you feel. If they do not eventually catch on, or start to express language about harming themselves, then it's time to seek professional help.

Acting Out Toward Peers

Before the age of 3 or 4, concepts such as keeping your hands to yourself, and sharing haven't always set in. Dr. Goldstein explains that young kids simply haven't learned self-regulatory skills that would keep a behavior like grabbing a toy from another child at bay.

Most of the time, a child who is shoving at the playground or refuses to take turns with the blocks at daycare is just testing the boundaries of how to behave. If by the time your child is of school age, your attempts at discipline haven't improved the behavior, or if a child is becoming disruptive in class, talk to a doctor.

Parents often express concern over this self-harming behavior, says Lourdes Quintana, infant toddler development specialist at the Howard Phillips Center for Children & Families, part of Orlando Health Arnold Palmer Hospital for Children in Orlando, Florida. Good news is if head banging happens infrequently, it's probably nothing to worry about. Yet if a child cannot stop the behavior, and it happens every time they encounter a challenge, it requires attention.

Quintana has seen toddlers who are frustrated by their inability to communicate with language bite either themselves, a parent, or another child. Rest assured, this is usually totally typical developmental behavior. However, there are occasions where it might be a bigger concern. "When you see the behavior doesn't respond to redirection, or discipline, you need to dig deeper and seek help," Quintana adds.

Being a picky eater is pretty common during early childhood. It's you kiddo is school age and only eats three foods you may want to be concerned. However, toddlers and preschoolers are experimenting with new tastes and textures. When an older child's nutrition starts to be affected by eating issues, it is something to pay attention to.

When to Seek Professional Help

With all of these behaviors, Dr. Goldstein explains, "What it comes down to is age." So parents, a lot of the things you see your child do that seem odd to you, may actually be developmentally appropriate. But if something your child is doing impedes their social life, it may be time to get help, Dr. Goldstein adds.

And pay attention to how often your little one is demonstrating a certain behavior. "The general rule on how to know if a behavior is 'typical' is frequency and intensity," says Quintana. When your child isn't learning to self-regulate over time, talk to a professional. 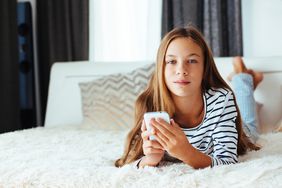 What Parents Should Know About Narcissism in Kids