Hopefully Aniston’s interview about her fertility struggles will vanquish some of the stigma around this common but not discussed enough experience.

What is it about sticking needles in your stomach—and then your rear end—on a daily basis, while having your blood drawn seemingly by the quart, and a wand stuffed into your uterus too many times to count, that feels like you should keep the entire experience to yourself, and not tell a soul?

As anyone who has ever gone through IVF knows, the most challenging aspects of the whole process are the shame and solitude—if you don't count the physical pain and emotional torture of not knowing if what you are putting your body through will actually be worth it. Yet, how many of us have endured the many steps of reproductive assistance completely alone?

As for why we suffer in silence, well, everyone's reasons are different, but, for me, I was way too vulnerable to open up to anyone about my IVF journey. I'd just lost a pregnancy pretty far along, and already felt exposed. Acquaintances accosted me at the store or in the street when I wasn't even remotely prepared to talk yet and asked questions about what had happened.

For Jennifer Aniston, not telling people that she tried everything to get pregnant was likely motivated by an intense sense of protectiveness over her private life, which has been the source of speculation for decades. The Friends alum revealed in a new interview with Allure that she is among the hundreds of thousands of people who have undergone some form of assisted reproductive technology (ART). Many had wondered for years if she was pregnant and gossiped as to whether the actress even wanted kids or was too self-absorbed to care about anyone but herself.

"I was trying to get pregnant. It was a challenging road for me, the baby-making road," Aniston, who memorably penned a 2016 op-ed for the HuffPost about being fed up with the bajillion times magazines claimed she was pregnant, confessed in Allure's December 2022 issue. Not that she told anyone. "All the years and years and years of speculation...It was really hard," she said. "I was going through IVF, drinking Chinese teas, you name it. I was throwing everything at it. I would've given anything if someone had said to me, 'Freeze your eggs. Do yourself a favor.' You just don't think it. So here I am today. The ship has sailed."

Aniston, confided, "I have zero regrets. I actually feel a little relief now because there is no more, 'Can I? Maybe. Maybe. Maybe.' I don't have to think about that anymore."

Let's take a deep breath as we settle into the realization that even Jennifer Aniston is just like so many of us. She too has sleepwalked into small, dark rooms and waited, half naked, on tables as doctors looked at scans without saying a word. She may be the most famous person in the world, but Aniston too has been poked and prodded to the point of feeling like a science project, and come out on the other side with nothing to show for it except for some empty bottles of hormone pills and a receptacle of used syringes—for the record, I still can't make myself throw them away.

As a longtime fan of Aniston, it's a relief to know I can relate to her on this level. You know, just in case we ever happen to cross paths in a coffee shop and just randomly start chatting about IVF. But on the other hand, I'm disappointed that she has ultimately contributed to the narrative that we should somehow be ashamed or secretive about undergoing ART. To this day, years after my brutal, gory miscarriage at seven weeks pregnant following my second IVF cycle (my first resulted in a son who is now 4 years old, to be fair), I don't often talk about having gone through any of that—unless of course, someone else brings up their experience with IVF or miscarriage first. It's then, only then, that I might go there.

Although I appreciate Aniston's candor, it feels too little too late. The mega-star did note in her interview that she is now sharing what she went through because she has nothing left to lose. But why are we waiting for someone else to open up first or until we don't have skin in the game to talk about this so important topic?

Our silence only leaves the door open for others to assume we are done having kids, never wanted them, or got pregnant super easily. Even more damaging, silencing our stories can be interpreted as being fine with our fate.

Of course, our family planning goals are no one's business—I hear your point, loud and clear. But I personally have put way too much energy into pretending everything is just fine over the years; it's exhausting just thinking about it, especially when the reality is that many of us are just like Aniston.

We have stories of disappointment, hurt, loss, pain, and despair to tell. I can only hope I'll be so lucky one day as to say that I too feel 100% at peace with how my story played out, as she claims to be. Until then, perhaps the actress' share will remove even a little of the stigma that surrounds IVF, and inspire even a few more folks not to presume they know where someone else stands when it comes to the desire to have a baby. 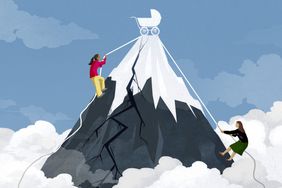