Pesach, the Hebrew word for Passover, is an eight-day festival representing rebirth and new beginnings. This Jewish springtime celebration is also an inspiring lesson all about social justice and freedom.

As the Catholic half of a Judeo-Christian interfaith couple, I learned a lot about Passover from my late mother-in-law because Passover's themes held great significance for her. As an educator and a feminist, she taught me that anyone can find relevance in this historically rich tale about liberation and equality. In her memory and against the backdrop of civil unrest and the pandemic this year, for us, the Seder will illustrate that hope prevails and freedom should be cherished.

Passover is a Jewish holiday that honors the freedom and exodus of the Israelites (Jewish slaves) from Egypt during the reign of the Pharaoh Ramses II. Before the ancient Jews fled Egypt, their firstborn children were "passed over" and spared from death, thus dubbing the holiday "Passover."

Since the crux of the holiday centers on emancipation from death and destruction, these fixtures can't be excluded when talking about Passover despite being frightening for young children. However, you can be sure the positive symbols of hope and resilience are what take center stage. Here's how to tell the story of Passover to kids, plus how to explain common traditions and ways to celebrate.

How to Host a Virtual Seder for Passover

What Is the Passover Story and Why Is It Important?

Over 3000 years ago, a wicked Egyptian king forced the ancient Jewish people to toil in the heat constructing buildings and carrying massive bricks. He gave them little food and sleep, his soldiers whipped them, and he didn't pay them. They were distraught because they weren't even allowed to have fun with their families. This king, Pharaoh, was so evil that he even killed their baby boys.

One mother, afraid for her infant son, bravely floated him down the Nile River in a basket. She would miss raising him, but she wanted him to live. So, when Pharaoh's daughter found him, named him Moses, and became his mommy, Moses was safe and became a prince.

In order to punish the Pharaoh to free the Israelites, God sent a series of 10 plagues to Egypt. The water turned to blood, frogs swarmed, there was an itchy lice infestation, wild animals roamed the cities, the cows died, the people got boils (terrible sores on their skin), there were hail storms, swarms of locusts ate the crops, and the sun went away for three days. But the stubborn Pharaoh continued his torturous ways.

Finally, God had no choice but to intend to kill the firstborn of both man and beast. To protect themselves, the Israelites were told to mark their dwellings with lamb's blood so that the angel of death would pass over their homes. After this devastation, the Pharaoh finally relented. "Go! Leave!" he yelled. The people were happy but mistrustful of Pharaoh, afraid he would go back on his word again. They quickly grabbed dough before it had time to rise and followed Moses into the desert with only this "matzo" to provide them sustenance.

On the seventh day of their journey, they came upon the massive Red Sea. They were exhausted, and the water was too vast to swim across. Their hope was shattered because they couldn't turn back as the Pharaoh's army was chasing them. That's when glorious God gave Moses the power to part it by raising his arm. The Jewish people crossed the water, and when the soldiers followed, the path closed, and the sea drowned Pharaoh's men.

Once they were safe, Miriam, Moses' sister, led a group of women in gleeful song and dance. Their positive energy was contagious and the ancient Jews rejoiced in their newfound freedom. For the next 40 years, they traveled through the desert until they reached Israel, where they enjoyed liberty.

When Is Passover and How Long Is It?

This year's Passover celebration starts March 27. We celebrate for eight days because although the Israelites left Egypt on the first day of Passover, they were chased by Pharaoh's army for a whole week.

Every family has its own unique Passover customs. My mother-in-law spent days cleaning and sweeping before Passover. This ritual is meant to cleanse the home of chametz (food and drink containing yeast or baking powder) to remind Jews of the flat loaves they baked in the sun for their hasty escape. All leavened foods are replaced with matzo, flat square crackers, for the whole week of Passover.

Traditional objects appear on the Seder table in addition to two candles that are lit to start the feast. When my children were in pre-school they created many of these items, including a matzo cover and candlesticks. Here are the other objects that are always a part of Passover Seder:

The most recognizable item on the table is the large round plate with six indentations. The Seder plate holds a roasted egg, which is a sign of new life; bitter herbs to remind us of the ancient Jews' hard lives; parsley to represent spring (which we dip in salt water depicting Jewish people's tears); charoset, a sweet mixture of apples and honey that represents the mortar used by the slaves; a shank bone to remind us of the slaughtered lambs; and lettuce or horseradish to symbolize the slaves' bitter lives. The oldest family member usually leads the Seder and refers to each object while telling the story. This helps Jews to visualize the past and look forward to a better future.

The Haggadah is the Passover book that everyone follows along with at dinner as the leader reclines. This text features the story of the Exodus along with prayers and songs to complete the observance. There are many versions; we have an interfaith Haggadah that I purchased for when my Christian side of the family joins us.

A kiddush cup represents the prophet Elijah's empty spot. It's believed that Elijah will announce a time of peace for our world, and since peace is reached when people are free of slavery and social injustice, we set a cup out so that he knows he is welcome and to arrive.

Foods such as gefilte fish, chopped liver, and brisket are part of the traditional fare. They aren't the most kid-friendly dishes in our clan, but matzo ball soup is a timeless favorite.

A fun game during the Seder is "Hide the Afikomen." Three pieces of matzo are covered in decorated fabric. The children hunt for it and Papa gives the kid who finds it five dollars. The next morning, we cook matzo brei. This delicious egg-dipped breakfast is similar to french toast but made with matzo and sugar instead of bread and syrup.

How to Make An Afikomen Cover for Passover

My favorite features of the ritual are the songs. "Deyenu" is about being grateful to God. We all tap a beat and sing, laughing because we sound so silly. The kids also sing about the frog plague.

Retelling the story of the 10 plagues is the best, believe it or not. We've used finger puppets, a bag of plagues, and even DIY paper bag plague puppets to represent this part of the story, which helps keep youngsters engaged.

The kids love when we send them to open the front door so Elijah can enter. Papa uses this moment to gulp the wine in Elijah's cup. When the children return they believe they missed seeing the prophet. My mother-in-law also introduced a kiddush cup with water for Miriam, Moses' sister, to highlight the importance of women's roles during the Passover story, especially in providing hope to the Jewish people.

If you have young ones, check out these plush plagues, the matzo bib, and the plague puzzle to make the holiday more interactive and festive. Whether it's normal, over Zoom (we enjoyed it this way last year), or if you eat socially distanced outside, hopefully this year, you'll enjoy a meaningful Seder meal. 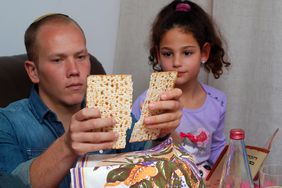 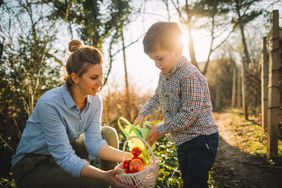 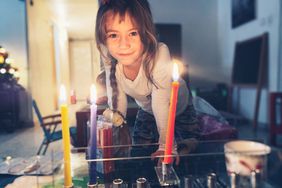 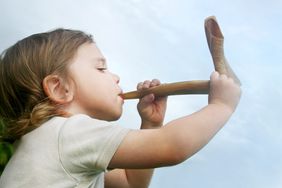