Gather up the gang for these incredible family Halloween costume ideas, which are easy to recreate yourself.

Carrie Haider Gatzke's kids dressed up as the Scooby Doo gang for Halloween, complete with a blow-up dog. This family Halloween costume comes together with regular clothes that your children can wear again and again.

These matching family Halloween costumes, designed by Karla Bennett Moore, are cute (and caffeinated!) instead of corny. Her family dressed up as venti, grande, and tall Starbucks Frappuccinos.

A Family of Supermen

Matching family Halloween costumes can be fun, too! Samantha Goodenough dressed her husband and kids in Superman gear, because everyone deserves to be a superhero on Halloween.

With this clever DIY family Halloween costume, your undead brood will rock the graveyard! Accessorize with formal-yet-funky touches, such as a choker, top hat, tutu, and vest.

Cute Halloween Pajamas for Kids
05 of 36

In another costume idea by Carrie Youngblood, these two chefs are preparing to heat up their little lobster.

Your child is the fruit (and flower) of your labors. Play up your role in their cultivation with this cute pair of Halloween costumes.

You can make the felt seed packet using store-bought letters, and the flower's petals by stapling paper to a simple headband. Other family members can dress up as farmers (in overalls and straw hats) or more flowers.

Family of five Halloween costumes may seem tricky, but this one requires a few simple "ingredients"—two slices of toast (parents) plus bacon, lettuce, and tomato (three adorably edible kids)!

Toast: For each piece: Cut a 20-x-30-inch piece of foam core to resemble toast. Make a belt with face-to-face duct tape. Attach adhesive-backed Velcro to each end; use as a closure. Tape the belt to the foam core at waist level. Cut light brown felt into a toast shape (about 25-x-35 inches), and hot glue a 1-1/2-inch-wide dark brown felt border. Attach to the foam core with duct tape.

View instructions for the Bacon, Lettuce, and Tomato costumes on the next three slides.

Poncho: Cut one 26-inch and one 20-inch square from dark green organza and cut a 23-inch and a 17-inch square from light green organza. Trim wavy edges around each square. Stack and center the pieces, the largest at the bottom, and cut a wavy slit from one corner to the center. Cut a round neck hole, 4 inches wide. Cut a 4-foot piece of thin ribbon and sew through all the layers around the neck hole, for tying.

Headpiece: Trim light green organza with rickrack and hot-glue it to a headband.

Body: Use hand towels or batting to pad the outside of two large plastic colanders. Cover in red stretchy fabric and hot-glue to the inside edge. Poke two holes through the fabric on opposite sides and two additional holes at the top, about 7 inches apart. Cut four 12-inch pieces of red ribbon and thread through the holes of one colander to the corresponding holes of the other; tie to secure over the shoulders and at the sides.

Collar: On green felt, draw an 8-point star, 18 inches from point to point, and a 6-inch hole in the center for the head. Cut out and repeat. Place chenille stems, from neckline to tip, on each "leaf" of one layer and hot glue the other layer on the top. Cut to the center between two points, as shown, and attach a green ribbon to each side; tie to close.

Hat: Cut three small leaves from green felt and hot-glue to the top of a hat.

Aimee Rios' crew became everyone's favorite Stone Age family for Halloween. Mama Wilma is holding little Pebbles, who even has the right hairdo for the occasion.

A Parent's Guide To Avoiding Offensive Halloween Costumes
12 of 36

Do your little ones still sing "Let It Go" all day long? Dress them up as the characters from Frozen, such as the Anna and Kristoff in this adorable photo. Mom Jenny Santoso played along as Olaf the snowman.

To recreate this family of three's Halloween costumes, designed by Lisa Adams, simply raid your closet for basic pieces, and add details to mimic Popeye and Olive Oyl. Your little munchkin can play the role of Swee'Pea.

The Wizard of Oz

No matter the size of your family, everyone can find a character in The Wizard of Oz to replicate. The dad in this photo even went as the Yellow Brick Road—how clever!

23 Halloween Costumes for Kids With Disabilities
16 of 36

How to Throw a Halloween Block Party
18 of 36

Cheryl Stewart Listi donned her Princess Leia costume to be a part of her family's Star Wars theme. Light sabers make the idea even more fun.

Heather Zito-Samuel submitted this picture of President Business and Lego Man having a blast in their getups.

Down the Rabbit Hole

For their Alice in Wonderland-themed costumes, Jamee Lynch Moore and her husband dressed as Tweedle Dee and Tweedle Dum, and their kids rocked Alice and White Rabbit outfits.

Erica Paredes made sure everyone in her crew was in costume to be part of the Avengers. Their youngest daughter was Baby Hulk.

A Family of Condiments

Carrie Youngblood shared this shot of a ballpark favorite come to life. Ketchup and mustard are doing a great job raising their mini hot dog!

Ahoy, matey! A pirate is nothing without their colorful parrot sidekick.

For the pirate, pair a loose white shirt and black vest with well-worn pants and boots, then tie a long scarf around the head as a bandanna. Finally, add finishing touches, like an eye patch and a fake scabbard.

View instructions for the Parrot costume on the next slide.

Poncho: Cut a 20-inch square of red felt. Cut a 5-inch slit in the middle of each side and a hole in the center for the head, about 6 inches in diameter.

Wings/feathers: Cut seven strips of colored felt, 4 inches wide, of varying lengths; cut each into a zigzag shape, as shown. Starting at a corner, hot glue overlapping rows of "feathers" and trim to fit. Repeat for the opposite corner.

Tail: Cut a 12-inch equilateral triangle from red felt and seven more strips of "feathers" from colored felt. Then, with one triangle tip pointing toward you, hot glue overlapping zigzag felt strips and trim to fit. Hot glue red ribbon along the top of the triangle for a belt.

Hat/beak: Cut a triangle from orange felt and hot glue to the front of a hat.

To infinity and beyond! Deb Kovatch and her family dressed up as three beloved animated characters from Toy Story: Woody, Jessie, and Buzz Lightyear.

Shawnna Kroeger is raising some serious football fans. We've got the whole gang here: a player, a coach, and some devoted cheerleaders.

Colleen Nicole Johnson got the grandparents and a few aunts to join her themed costume idea. We think everyone looks great as a Muppet!

Whipping up your own personalized superhero outfits isn't so hard! In this example, no-sew capes team up with felt-and-duct-tape masks, belts, and badges personalized with the initial of the family's last name.

The Most Popular Halloween Candy in Every State
30 of 36

A parental pit crew supports a speedy young upstart who's on track to blow away the competition. The crew is outfitted in disposable coveralls from the hardware store, detailed with duct tape. The trophy and wrench get their shiny silver coat from aluminum foil. You can customize the car to fit over a variety of chassis (wheelchair, stroller) or a driver who's on foot.

Help a trio of pretty pixies take flight! All you need for this set of costumes are floral headbands (glue fake flowers to a headband), flower wands (glue flowers and ribbons to the tip of a painted stick), gossamer wings, puffy tutus, and leggings.

For this clever family Halloween costume, your stroller becomes an all-American snack cart, complete with the cutest hot dog on the block. Parents can coordinate with white button-down shirts, jeans, aprons, and paper servers' hats.

Need a family Halloween costume for siblings or cousins? Dress everyone in comfortable concert performance outfits like graphic tees, striped shirts, hoodies, dark jeans, and sneakers. Then add some instruments (a toy guitar, a set of drum sticks), plus some hats and hip shades. And make sure to gel some hair for a rocking crew of bandmates!

Farmers love showing off their favorite barnyard animals in this adorable costume idea. Adults can throw on some overalls or jeans, checkered shirts, boots, and straw hats.

View instructions for the Pig and Cow costumes on the following two slides.

Tail: Cut two 6-inch circles from light pink sticky-back felt. Arrange chenille stems in a spiral on the sticky side of one circle. Stick the other circle on top and cut in between the chenille stems into a spiral shape. Pull the spiral from the center to create a tail and hot-glue to the back of a pair of pants.

Horns: From beige felt, cut two horn shapes of the same size. Place one on top of the other and glue the edges of the two sides—stuff with batting or cotton balls. Glue the remaining side closed and hot glue to the hood. Repeat.

Tail: Cut a 4-x-4-inch square of black felt and cut fringes on one side. Hot glue the opposite side around one end of a 38mm white chenille stem. Attach the top of the tail to the back of the sweatpants with a hot-glue gun. 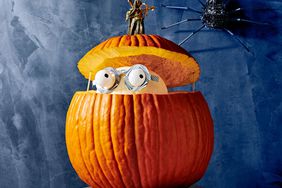 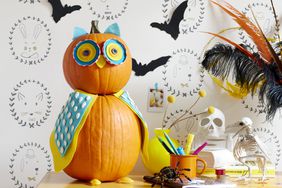 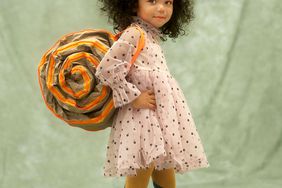 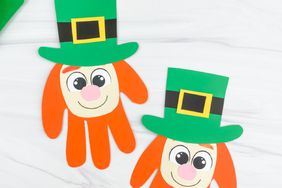 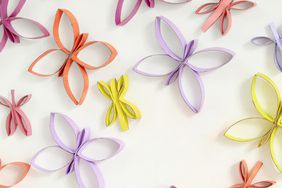 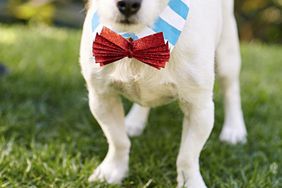 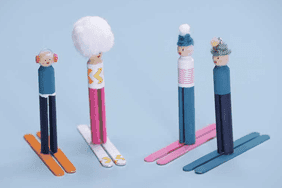 We Wish You a Crafty Christmas 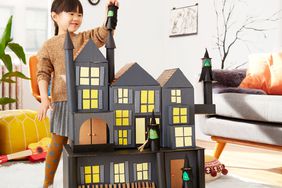