While summer may be drawing to a close, the party doesn't have to end. Serve up some hot dogs—and fun!—with these kid-friendly Labor Day facts.

Typically associated with pool days, beach days, and barbecues, Labor Day is widely celebrated throughout the United States. It is, after all, the last unofficial day of summer. But in spite of its popularity, most people don't know the history of this much-adored long weekend. So as you soak up the last rays of sunshine this September, consider teaching your children more about the cultural significance of this federal holiday.

What Is the History of Labor Day?

The first Labor Day took place on September 5, 1882 in New York City. Dissatisfied with long, 16-hour work days and harsh working conditions, laborers spent the unpaid day off protesting. In 1894, Congress passed an act officially making Labor Day a federal holiday. It has been celebrated ever since!

While it is unclear who exactly "founded" Labor Day, there are certainly some key players. Records from 1882 indicate that Peter J. McGuire, general secretary of the Brotherhood of Carpenters and Joiners and a co-founder of the American Federation of Labor, was the one who suggested having a day to celebrate the working class. More recent research, however, shows that Matthew Maguire actually proposed the idea while serving as secretary of the Central Labor Union in New York. He later went on to be secretary of Local 344 of the International Association of Machinists in Paterson, New Jersey.

Though the title of "founder" is disputed, both McGuire and Maguire attended the first Labor Day parade in 1882 in New York City.

Why Is Labor Day Celebrated?

Labor Day celebrates the working class and honors all of their contributions that have helped our country grow. Today, the holiday is celebrated as the unofficial last weekend of summer.

How Many People Make Up the U.S. Labor Force?

The U.S. labor force peaked in February 2020, hitting a high of 164.6 million workers. The term "labor force" includes anyone 16 years of age who is either employed or unemployed.

Labor Day is marked by a national "day-off" from work on the first Monday in September. People usually spend the day with family and friends, getting in the last of their favorite summer activities, like swimming and hot dog eating.

Why Do People Say 'You Can't Wear White After Labor Day?'

You may constantly hear people saying, "You can't wear white jeans after Labor Day!" but where exactly did this myth come from? Its origin may surprise you. This fashion "rule" originated in the 1800s as a way to distinguish between social classes.

Wearing light colors was a sign of status, indicating that one was wealthy enough to take vacation in the fall or winter and didn't have to worry about dirtying their white clothing in the workplace. Those who couldn't afford these luxuries didn't wear white after Labor Day, prompting the silly tradition we hear so often today.

But, don't worry, you can wear whatever color you'd like!

Looking for a few other fun facts? Here are some notable things about Labor Day. 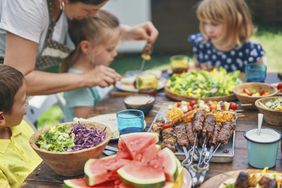