In 2017, Oregon lawmakers passed a bill requiring that kids be current on their shots. If families couldn't provide proof of immunization by February 21, their children were sent home from school.

Data released last month by the Blue Cross Blue Shield Association noted that since 2010, a small but growing number of parents are opting out of having their children get recommended vaccinations. This concerning trend has hit Oregon particularly hard, as the state is currently dealing with the nation's highest rate of childhood vaccination exemptions and a lower than average rate of anti-measle immunizations. In response, lawmakers enacted a new policy in public schools requiring that kids be current on their shots for measles, polio, chicken pox, hepatitis A and B, HIB, DPT, and MMR. If families didn't provide proof of vaccination by February 21, students were sent home from school.

The policy, called Immunization Exclusion Day, is the result of a House Bill 3276 that passed in 2017 and was implemented after there were several small outbreaks of meningococcal disease at the University of Oregon and Oregon State University.

Thousands of parents in Oregon were given a heads-up about Immunization Exclusion Day in the form of letters from the state’s Health Authority. The warning noted that their kids were behind on their necessary immunizations, and if their “records on file show missing immunizations," their “children will not be able to attend school or child care” until they could prove vaccination.

Last year, nearly 30,000 warning letters were sent to parents, and 4,646 children were kept out of schools. Authorities are hoping that with this being the second year that the policy is in effect, the numbers will be lower.

A factor that could stand in the way of that goal: exemptions from immunization, which might be a medical or “philosophical, religious, or personal” reason. That said, Oregon is also attempting to keep exemptions from running rampant by requiring that parents who claim them go through an online education program or go see a doctor.

These moves send a powerful message to Oregon families—and those nationwide—proving that the state's lawmakers are prioritizing kids' health. With hope, Immunization Exclusion Day will encourage a higher rate of vaccination across the state, helping to keep serious diseases at bay. 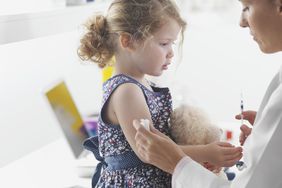 Children in Anti-Vaccine 'Hotspots' Are at a Higher Risk for Illness, Says a New Study