False Reports Have Been Circulating Claiming That Vaccines Cause Infertility. They Absolutely Do Not

The myth allows false reports to pop up surrounding the COVID-19 vaccine. Here, what you need to know about infertility and rolling up your sleeve.

The U.S. Food and Drug Administration (FDA) authorized three COVID-19 vaccines (Pfizer, Moderna, and Johnson & Johnson) for widespread distribution across the U.S. Vaccine rollout has brought a sense of relief, representing a beacon of hope amidst a pandemic that has already taken over 650,000 American lives. But it also surfaced myths regarding vaccinations—including the false claims they cause infertility.

Unfortunately, this myth is circulating widely on social media and online forums. And recently, rapper Nicki Minaj didn't attend the Met Gala due to COVID-19 vaccination requirements. In a tweet, she claimed that a cousin abroad had a friend who "became impotent" after getting vaccinated.

Myths about vaccines have long been discredited by medical professionals, but we asked fertility doctors and OB-GYNs to debunk them, explain how vaccine-infertility myths even started (especially related to the COVID-19 vaccine), and discuss what you really need to know about both rolling up your sleeve and seeking evidence-based answers regarding infertility.

Where the Vaccines-Infertility Myth Originated

It's difficult to pin down a specific event, but many health professionals believe the vaccine-infertility myth can be linked way back to a 1998 study in the medical journal The Lancet that falsely associated the MMR vaccine—which protects against measles, mumps, and rubella—with autism. In 2010, the paper was retracted by both the co-authors and the journal and the association between vaccines and autism has been disproven over and over again.

Then in 2018, a very poorly-designed study published in an obscure toxicology journal, the Journal of Toxicology and Environmental Health, also claimed that the human papillomavirus (HPV) vaccine could cause infertility in women.

"The journal later retracted this study due to concerns about its scientific validity," explains Tarun Jain, M.D., a reproductive endocrinologist at Northwestern Medicine in Chicago. "Some damage had been done, however."

Case in point: Despite follow-up studies—including one at the University of Wisconsin that found no evidence of increased infertility among women who received the HPV vaccine—false information continued to spread, in large because of social media.

And that's what's going on now. With the COVID-19 vaccine, misinformation has been spread via various posts, including an image that claims the vaccine is "female sterilization" due to its perceived impact on a protein called syncytin-1 that helps with placenta formation. The claim proposes that because the syncytin-1 protein is similar to the spike protein of SARS-CoV-2, the antibodies produced would attack the placenta.

However, this claim has been refuted and claimed as false by doctors, researchers, and others in the medical community. "It has been incorrectly suggested that COVID-19 vaccines will cause infertility because of a shared amino acid sequence in the spike protein of SARS-CoV-2 and a placental protein," Pfizer spokeswoman Jerica Pitts said in an email to the Associated Press.

What You Need to Know About Vaccines and Infertility

When they are confronted by patients with any concerns, doctors rely on scientific research to reassure their patients that vaccines do not cause infertility.

"I explain the following two points: One, there is no credible evidence that shows a link between vaccines and infertility, and two, there is no plausible mechanism of action that would link vaccines with infertility," says Dr. Jain, who adds that when it comes to the COVID-19 vaccine, "so far, no credible scientist is concerned about an impact on fertility."

'I'm a Doctor and a Parent': Here's How Vaccines Work

Laura Detti, M.D., chair of the department of subspecialty care for women's health at the Cleveland Clinic's OB-GYN and Women's Health Institute adds: "Research so far has not found any major adverse effect or immediate adverse effect. It makes no sense that there would be any fertility effect of this vaccine."

The process for FDA vaccine approval is also rigorous, she explains. Specifically for the Pfizer-BioNTech COVID-19 vaccine, the approval was confirmed after an analysis of 36,523 participants who received either the vaccine or placebo.

Dr. Detti says it's important to focus on true potential causes of infertility, which can range from everything from pelvic inflammatory disease to endometriosis. "Causes of infertility span across different endocrine functions to actual gynecological functions in the fallopian tubes and uterus," she explains.

For up-to-date information about the COVID-19 vaccine, visit the FDA's website. The Pfizer-BioNTech vaccine is approved for people 12 and older, while Moderna and Johnson & Johnson are approved for those 18 and over. The Centers for Disease Control and Prevention (CDC)—and various other organizations—recommend the vaccine for women who are pregnant or trying to conceive. "There is currently no evidence that any vaccines, including COVID-19 vaccines, cause fertility problems in women or men," the CDC says. 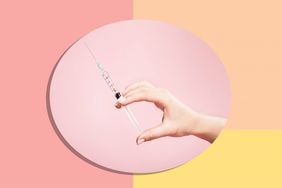 A Parent's Guide to Getting the COVID-19 Vaccine: What It's Really Like and What Happens After