The Way Other Kids Treated This Girl With Autism Made Her Mom Speak Out—In a Good Way!

Despite the stories of misunderstanding and hate we often hear, we shouldn't forget there's also a lot of kindness in the world, too.

An open letter written by the Kentucky mom of a daughter with autism to another mother, praising her children's actions at a local water park, is going viral. Since Stephanie Skaggs posted the touching missive to Facebook on July 23, it has been shared over 8,000 times.

"To the mom in the baby water park at Kentucky Kingdom yesterday," the post begins. Skaggs goes on to say this mom's children behaved in such a way that she just had to speak to her. But it's not for the reason you may think.

"We spoke and I don't think you fully understood how your children and their behavior affected me, so I am writing this.. [sic] maybe it will find its way to you and you will know who you are. Maybe it wont [sic] but other moms will see it and maybe take something away from it as well. It may not seem like a big deal to other people. But I do know that there are some people who will really get it," Skaggs writes.

She shares that her 5-year-old daughter Baylee has autism and is mostly non-verbal. "We were practicing very hard on waiting in line, and she was doing well for the most part," Skaggs says. "We had a routine. Wait in line.. [sic] then when we were 4 from the front, sit on the step, then down into the water then scoot up, then wait at the top of the slide for the ok to go from the lifeguard. This was our routine, and every time she did it, her understanding of the routine improved and her patience increased."

Unfortunately, some kids cut the line, which this mama admits kids are apt to do, but for Baylee it was a kind of big deal, because it upsets her routine. "And to her it feels like the end of the world!" Skaggs writes in the post. "Coping with unexpected change is another skill we practice every day. It is one of the more difficult skills to practice and especially in public when people, especially other children do not understand why she is reacting the way she does. I dread it. Not what she will do but what other people will."

But just as Skaggs was bracing herself for the worst, another child looked up and said, "She can go ahead of me." The grateful mom writes, "It was so sweet and I told her what a sweet girl she was. And we moved on. Of course as busy as the park is, it wasn't long before we found ourselves in the same situation, when a young boy this time was in front and offered to let Baylee go ahead because he could tell she was not understanding what happened. Again, I praised his good behavior and kindness and we went ahead."

Skaggs soon guessed the girl and boy were siblings. "I told them both how great it was that they looked out for someone who was different.. [sic] and the difference that small acts of kindness make even if it doesn't seem like much. They really touched my heart."

When Skaggs approached the kids' mother and told her she was raising two wonderful children, she simply said, "I don't know about that." But Baylee's mother wants her to know that truly, she is. In fact, it is families like theirs that give Skaggs hope for her daughter's future.

"As a mom of a child with Autism [sic], we do not know what to expect for her," the mom writes. "She grows and learns more every day, but I still worry. Every time she has a big improvement or meets a goal she has worked for, my joy is immediately dimmed by the concern I have for the kinds of struggles she faces in a world that is not always kind."

She ends her post, "When I looked at [your kids'] sweet little faces, filled with pride as I praised them, it made me happy to know that more moms are raising their children the way you are!"

If only we could all take a moment of our lives to tell other parents they are doing a great job like Skaggs did. And if we could all only be so kind to others, as these children were to Baylee. Then, the world would be a much better place. 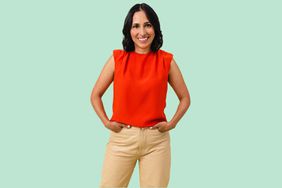