Whole Foods Market stores have recalled cheese made by Crave Brothers Les Freres because of a number of cases of listeria contamination. Listeria is a bacteria that is of particular danger to pregnant women or people with compromised immune systems. More from NBC News:

Whole Foods says the cheese may be contaminated with Listeria monocytogenes. It was sold in 30 states and Washington DC under names including Les Freres and Crave Brothers Les Freres. The cheese was cut and packaged in clear plastic wrap and sold with Whole Foods Market scale labels. The company is posting signs in its stores to inform customers about the recall.

Officials said cases have been identified in at least three states. Public health officials in Illinois said Wednesday that one resident became sick after eating contaminated cheese in May. Minnesota officials said Thursday that one elderly person in the state died and another was hospitalized after illnesses linked to the cheese. Both of those illnesses happened in June.

Listeria can lead to severe illness for women who are pregnant or people who have weakened immune systems. In healthy individuals, it can cause symptoms including high fever, severe headache, stiffness, nausea, abdominal pain and diarrhea. 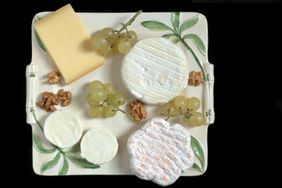 Unpasteurized Cheese While Pregnant? Don't Do It!