A first-grade Colorado child who was born a boy but identifies as a girl is the subject of a discrimination complaint filed by the Transgender Legal Defense and Education Fund. Last December, Eagleside Elementary School decided that first-grader Coy Mathis was no longer allowed to use the girl's bathroom, prompting the complaint. More from CNN:

Mother Kathryn Mathis said she and her husband were shocked.

"We were very confused because everything was going so well, and they had been so accepting, and all of a sudden it changed and it was very confusing and very upsetting because we knew that, by doing that, she was going to go back to being unhappy," she told CNN. "It was going to set her up for a lot of bad things."

Coy was born with male sex organs but has identified as female since she could express herself, her mother said. The child had attended classes during her kindergarten year with no problems and no complaints from anyone at the school, Mathis told reporters at the Colorado Capitol in Denver, where she was flanked by her husband, Jeremy, and four other children. 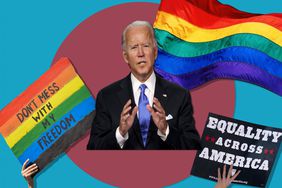