People whose mothers smoked during pregnancy had weaker responses in the regions of their brains known to be involved in inhibition control, compared to those whose mothers didn't smoke, researchers found.

Inhibition control relates to how people keep their impulses in check and resist distractions in certain situations.

"What's quite surprising is to find such a reliable effect of prenatal smoke exposure that occurred 25 years before," Nathalie Holz said.

Holz is the study's lead author from Mannheim/Heidelberg University in Germany.

She and her colleagues write in JAMA Psychiatry that about 22 percent of European women smoke and about half of them continue to smoke during pregnancy.

Smoking while pregnant has been tied to attention-deficit/hyperactivity disorder, or ADHD, among kids. Children with the condition usually have trouble concentrating and controlling their impulses.

"Now we were interested in what the specific mechanisms are behind this association," Holz said.

Sign up to get more pregnancy news, tips, and tricks sent directly to your inbox!

My Child Behaves at Home But Acts Out at School—What Can I Do?
25 Tips To Get Pregnant, According to Experts 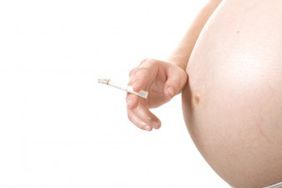