Nearly 1,300 kids die from gunshot wounds each year, according to a new study. The number has increased for the first time since 2006.

Nearly 1,300 children die and 5,790 are treated for gunshot wounds each year, according to a new study, "Childhood Firearm Injuries in the United States," published in the July 2017 issue of Pediatrics. This makes firearm-related deaths the third-leading cause of death overall among U.S. children ages 1 to 17 years, and the second-leading cause of injury-related death, behind only car crashes. Although firearm injury mortality rates for children in this age group declined gradually from 2006 to 2013, they have risen again over the past two years and accounted for 10 percent of all children's deaths in 2014 and 2015.

"Firearm injuries are an all-too-common way of death for children and youth in the U.S.," wrote Eliot W. Nelson, M.D.., in a study commentary, "Confronting the Firearm Injury Plague," which was also published in the July 2017 issue of Pediatrics. "An even grimmer picture appears if we extend the age range through the teenage years to age 19, because firearm injury rates rise steeply in late adolescence: Among children and youth aged 1 to 19, firearm injuries accounted for more than 14 percent of all deaths in 2015. So, more than 1 of every 7 children of these ages who died of anything died of a gunshot wound."

In the study, researchers examined recent data from the National Vital Statistics System, National Electronic Injury Surveillance System, and the National Violent Death Reporting System. Of the nearly 1,300 children who die each year in the U.S. from a firearm-related injury (1.8 per 100,000 children), 53 percent were homicides, 38 percent were suicides, 6 percent were unintentional firearm deaths, and 3 percent were due to other intent. "We examined demographic characteristics, trends over time, state-level patterns, and the circumstances surrounding childhood firearm deaths," says study author Katherine Fowler, Ph.D., a behavioral scientists at the Centers for Disease Control and Prevention (CDC). "Understanding these patterns helps us figure out how best to prevent them from happening in the first place. Ensuring that all children have safe, stable, nurturing relationships and environments remains one of our most important priorities."

Boys account for 82 percent of all child firearm deaths, and black children have the highest rates of firearm mortality overall due to much higher firearm homicide rates (4.1 per 100,000) —10 times higher than the rate for non-Hispanic white and Asian/Pacific Islander children. The highest rates of firearm suicide, however, are among non-Hispanic American Indian/Alaska Native and non-Hispanic white children (2.2 per 100,000), who had a four to five times higher incidence than other groups. Firearm suicides among children increased a significant and startling 60 percent since 2007.

Is My Child Suicidal?

"Childhood firearm injuries are more common than parents might realize," Dr. Fowler says. "These injuries are preventable. There are many steps that parents and other adults can take to help keep children safe from firearm assaults and homicide, suicidal behavior, and unintentional firearm injuries."

To prevent gun injuries and death among children, the American Academy of Pediatrics (AAP) recommends parents ask neighbors, friends, and family if they own a gun before your child visits their home. If they do, keep your child away from homes where there are guns or where guns are not stored safely. The AAP also strongly advises that the best preventive measure against firearm injuries and deaths is not to own a gun. If a gun is kept in the home, it should be kept locked up, unloaded, with ammunition stored and locked separately.

"Parents should watch out for signs that their child may be at risk for violence or suicide, such as changes in how their child is acting, signs of depression, or anxiety," Dr. Fowler says. "Parents should be mindful of life stressors that their children may be facing such as problems at school, with friends, or a recent crisis. If a child shows a warning sign, parents should talk with their child and get help from others like teachers, a pediatrician, or clergy to identify solutions." 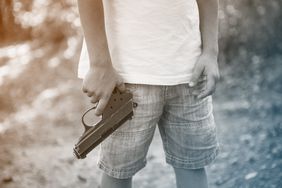