In the making since 2008, the ACE report is based on peer-reviewed research and databases from federal agencies, including the Food and Drug Administration, Housing and Urban Development and the Centers for Disease Control and Prevention.

Public health officials view it as a source of one-stop shopping for the best information on what children and women of childbearing age are exposed to, how much of it remains in their bodies and what the health effects might be. Among the "health outcomes" listed as related to environmental exposures are childhood cancer, obesity, neurological disorders, respiratory problems and low birth weight.

The report cites hundreds of studies -- both human, epidemiological studies that show a correlation between exposure to certain chemical pollutants and negative health outcomes, and animal studies that demonstrate cause and effect.  In some cases, the authors note, certain chemicals have been detected in children, but not enough is known about their effects to draw conclusions about safety.

In a section on perfluorochemicals (PFCs), for example, which are used to make nonstick coatings, and protect textiles and carpets from water, grease and soil, among other things, the draft notes that they are found in human breast milk.

The report said that "a growing number of human health studies" have found an association between prenatal exposure to PFCs and low birth weight, decreased head circumference and low birth length. It also stated that based on "emerging evidence suggests that exposure to some PFCs can have negative impacts on human thyroid function."

Furthermore, it noted that animal studies produced similar results, although exposures were typically at higher levels than people are exposed to.

The EPA's website still notes that the report will be published by the end of 2011.  But after a public comment period that was marked by unusually harsh criticism from industry, additional peer review and input from other agencies, the report landed at OMB last March, where it has remained. No federal rule requires the OMB to review such a report before publication, but EPA spokeswoman Julia Valentine said the agency referred it to the OMB because its impact cuts across several federal agencies.

The spokeswoman said EPA had no idea when OMB would release it, allowing publication.

Image: Child near factory, via Shutterstock 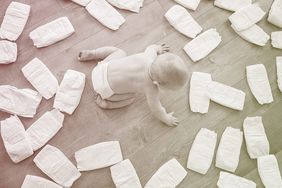