As classrooms become more electronically connected, public schools around the country are exploring whether they can use virtual learning as a practical solution to unpredictable weather, effectively transforming the traditional snow day into a day of instruction.

About a third of school districts in the United States already have "significant one-to-one initiatives," where students and teachers are given laptops and can work away from school on some assignments, said Ann Flynn, the director of education technology at the National School Boards Association. A byproduct "could be their application in times of health crises or in weather emergencies," Ms. Flynn said.

Here, in the Pascack Valley Regional High School District, the impetus came after Hurricane Sandy forced schools to close for several days, said P. Erik Gundersen, the superintendent. This week's approaching snowstorm, he said, looked "perfect for us, as the first time for making a true, virtual school day."

He notified teachers. He petitioned the state's Education Department to have it treat the day as a traditional school day. That is critical, because the district had already used its three allotted snow days this winter, meaning it would have to convert a future vacation day to a school day to avoid dropping below New Jersey's 180-day minimum for the academic year.

State officials said they would take a look, gathering evidence that the experiment worked and involved student-teacher engagement throughout the day, and that it was not just a glorified homework assignment.

"This is an idea that we'd be interested in exploring in the future," said Michael Yaple, a spokesman for the Education Department.

There are broader questions, though, about access to technology.

In New York State, where no district can substitute a virtual day for a snow day, Dennis Tompkins, a spokesman for the state's Education Department, noted that not all students have computers or Internet access. And for students to truly keep up, he said, "a thoughtful plan aligned with the curriculum" would need to be developed before a storm struck.

In this New Jersey enclave, each of the 2,000 students in the district's two high schools, as well as their teachers, have laptops that cost $1 million in total and are replaced every two years. Few students do not have a Wi-Fi Internet connection at home.

"Teachers developed very thoughtful plans," Mr. Gunderson said. "Even if the state does not approve this, it was great to keep educating students despite a snowstorm."

Need inspiration for fun things to do around the house? Check out these kid-friendly crafts using household items!

Image: School buses on a snow day, via Shutterstock 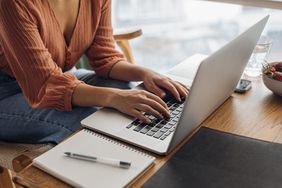