Most American teenagers make or receive 5 cell phone calls each day, research has shown. Whether that regular cell phone use, over time, can cause brain tumors, is a topic of high debate in the scientific community.

On May 31, the World Health Organization (WHO) placed cell phones on a list of 266 items that may cause cancer in human beings. Yet a study published this week in the Journal of the National Cancer Institute would seem to reassure parents that kids who use cell phones are at no heightened risk of developing brain cancer. The study concluded, "Regular users of mobile phones were not statistically significantly more likely to have been diagnosed with brain tumors compared to nonusers."

So they didn't find an increase between the "regular user" group and the control group. But based on their definition of a regular user, it's unlikely that they would. Also because, as noted by the National Cancer Institute, "The interval between exposure to a carcinogen and the clinical onset of a tumor may be many years or decades." That means if a 13-year-old starts using a cell phone on a daily basis in 2011, it will be years or decades before any damaging evidence is seen. Very few people believe talking on the phone once a week for six months will cause brain cancer. But for teens who are using their cell phones in a more typical fashion – at least five times per day- the answer is less clear.

Experts advise parents to consider teaching their children to take cell phone precautions such as using hands-free devices or speaker phone, or doing more texting than talking to keep the cell phone's antenna away from their heads. 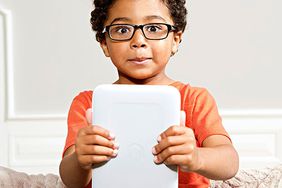