A new study has found that men who have two defective copies of the gene DEFB126 cannot produce a protein that coats sperm and allows it to more easily reach an egg. The finding, while not a definitive answer on the causes of male-factor infertility, sheds important light on a condition that often puzzles doctors and frustrates couples who are trying to conceive a child.

The study, published in the journal Science Translational Medicine, followed 500 Chinese couples who were trying to become pregnant and found that men with two defective copies of the gene were 30 percent less likely to conceive over a 2-year period than men with one or two healthy copies. The study also reported that the genetic mutation is common, affecting around 25 percent of all men, and that though it can slow the reproductive process down, it does not always prevent pregnancy, particularly when the man's sperm is otherwise healthy in terms of number, shape, mobility.

The New York Times quoted Dr. Gary Cherr, the study's senior author, on what the findings might mean for couples who are having a hard time getting pregnant:

Dr. Cherr said it would be relatively simple to develop a test for the mutation to be performed in a clinic or at home. Eventually he envisions a treatment, possibly a cream or gel, that would essentially restore the protein to help sperm enter the reproductive tract. For now, he said, if couples find a double mutation, they could avoid some additional expensive fertility testing and undergo fertility treatments that directly inseminate the woman's egg.

Dr. Lamb said such a test could suggest an even cheaper option.

Since some Chinese couples "were able to achieve pregnancy on their own — it was just taking a longer time," she said, couples "could simply be told to maybe wait a little longer than a year." 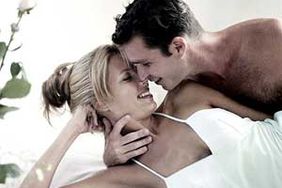