Math and Reading Skills Are Affected by the Same Genes

A point against the idea that there's a good-at-math gene you're lacking—scientists have discovered that many of the genes that influence a child's math ability also impact their skill at reading. The study, published in the journal Nature Communications, compared DNA and math and reading test results for nearly 2,800 12-year-olds in the UK, looking for DNA differences and how skills matched up.

Of course, there isn't complete overlap (could that account for the lack of math or language prowess in an otherwise brilliant person?)—and the study authors also found that nurture can also play a role in whether your child becomes the next Einstein or Shakespeare.

"We looked at this question in two ways, by comparing the similarity of thousands of twins, and by measuring millions of tiny differences in their DNA. Both analyses show that similar collections of subtle DNA differences are important for reading and maths," study author Oliver Davis, of University College London, said in a school news release.

"However, it's also clear just how important our life experience is in making us better at one or the other. It's this complex interplay of nature and nurture as we grow up that shapes who we are."

Not sure where your child's talents lie? Take our quiz.

Image: Kids at school by Pressmaster/Shutterstock.com 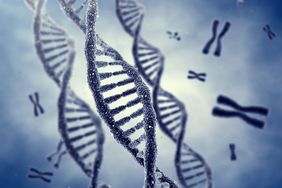