If Your Preschooler Craves Fast Food, You May Want to Turn Off the TV

According to a new study, preschoolers who see ads for fast-food are more likely to eat it.

According to new research out of Dartmouth, preschool-aged kids who are exposed to child-targeted fast-food ads on television are way more likely to want to eat fast-food. And while this is not necessarily groundbreaking news, it's further proof that we should be carefully monitoring what our kids are watching.

Because as much as we may love our Mickey D's french fries, children's consumption of fast food is associated with increased intakes of calories, fat, and sugar, making fast-food consumption an important risk factor for obesity and myriad other health problems.

In other words, it's totally not good for them.

To determine just how big a part the power of suggestion on the telly plays into all this, researchers surveyed almost 550 parents of preschoolers about their child's viewing habits and fast-food consumption during a given period. Their responses were then compared to a list of the fast-food commercials from McDonald's, Subway, and Wendy's that aired on kids' TV channels during that same block of time.

The findings? Moderate or high exposure to TV ads increased the likelihood of consuming the fast food by about 30 percent. During the chosen time period, 43 percent of the preschoolers ate food from one of the three restaurants, and 41 percent of them had been exposed to the chain's ads on TV. This association was independent of the overall number of hours of TV the children watched, the frequency with which their parents ate fast food, and other factors like socioeconomic status.

And get this: The Golden Arches accounted for nearly three-quarters of the commercials, and a whopping 79 percent of the children's fast-food consumption.

See what I mean about those fries?

The researchers say that while the study's findings are not particularly surprising, they are most definitely of concern because children under 6 can't yet distinguish between advertisements and TV shows, which makes them extremely vulnerable to persuasive messaging. The hope is that this study will eventually lead to policy recommendations to limit child-directed fast-food marketing on TV. But until that happens, concerned parents should try to steer their child's viewing towards ad-free preschool streaming services like Kidoodle and Hopster. 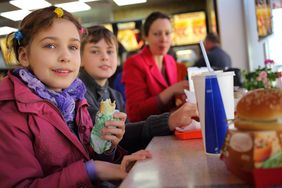 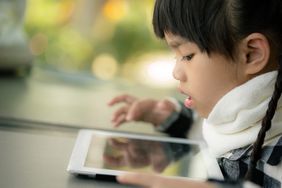