Gardasil, the human papillomavirus (HPV) vaccine that has been given to girls since 2009, is increasingly being recommended for boys as well to prevent genital warts as well as the transmission of HPV, the latter of which can cause cervical and vulvar cancers.

The New York Times is reporting that the vaccine--an often painful series of 3 shots given over a period of 7 months--has only been taken by 1 in 4 American girls under age 18, and is not routinely recommended by pediatricians. But new research is showing the vaccine to have potential benefits for men, specifically protection against cancers of the anus and penis, that might warrant it becoming routine for boys.

From the Times article:

Yet a growing body of evidence implicates the human papillomavirus in a wide range of equal-opportunity cancers that don't discriminate based on gender.

Debbie Saslow, director for breast and gynecological cancers at the American Cancer Society, said that even though the numbers are small, "the data are believable."

The vaccine has been tested for safety in just 1,000 boys younger than 16. In a trial of 4,055 young men ages 16 to 26, the most common side effects were headache, fever and pain, itching, redness, swelling and bruising. 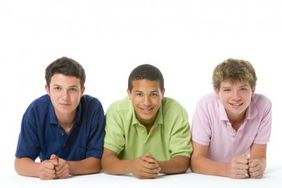