Researchers have found exercise has long-term benefits for kids' mood and may help prevent depression down the road.

It's no secret that exercise releases feel-good endorphines and can act as a mood-enhancer. I work out for that very reason: starting my day with yoga or cardio kickstarts my positive attitude, which I need to be a successful working mom of three busy kiddos. I'm also a big believer that kids benefit from exercise, in so many ways, not the least of which is that their self-esteem gets a major boost.

Now a study out of Norway published in the February 2017 issue of Pediatrics finds that physical activity can help bolster kids' moods in more than just the short-term. Researchers, led by lead author Tonje Zahl at the Norwegian University of Science and Technology, looked at nearly 800 children between the ages of 6 and 8 and their physical activity patterns, via a wearable device. They determined that children who engaged in moderate to vigorous exercise were less likely to show symptoms of depression two years later.

The study, "Physical Activity, Sedentary Behavior, and Symptoms of Major Depression in Middle Childhood," was not able to conclude that a lack of physical behavior predicted depression in kids, or vice versa. And the effect of exercise on depression was not huge, but when kids exercise, well, there's basically no downside.

"We know that very little physical activity, especially vigorous activity, takes place indoors," Zahl adds. Her advice: "Let the children out to play with you, or with friends. Get your child involved in organized sports, and although sedentary activity does not increase the risk of depression by itself, reducing sedentary activity (e.g. video gaming) may increase the opportunity to be physically active, which in turn may reduce depression."

Zahl encourages parents to make exercise fun. For me, that means enrolling my kids in activities they enjoy, and skipping those they complain about. And we live near a lake, so it's easy to keep them outside and engaged during the spring and summer months, but admittedly, it's tough this time of year, and we tend to default to iPads and movies. Thanks to this research for giving me the kick in the "you know what" to rededicate my efforts to get my kids to turn off the TV and start moving their cute little bods! 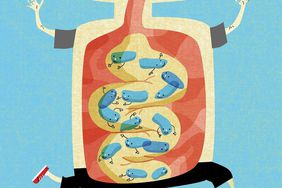