Guess What Helps Your Baby's Memory? A New Study Says...

The way you talk to your baby may affect what he remembers, new research suggests.

According to a study published in Infant Behavior and Development, researchers at Brigham Young University have determined that babies are more likely to remember things when they're paired with positive associations rather than negative ones.

According to a news release, researchers monitored the babies' eye movements and how long they looked at a test image.

The babies were set in front of a flat paneled monitor in a closed off partition and then exposed to a person on screen speaking to them with either a happy, neutral or angry voice. Immediately following the emotional exposure, they were shown a geometric shape.

To test their memory, the researchers did follow-up tests 5 minutes later and again one day later. In the follow-up test, babies were shown two side-by-side geometric shapes: a brand new one, and the original one from the study.

The researchers found that by recording both the amount of time babies looked at each image and how many times they looked from one image to another, the babies who had images paired with negative voices couldn't remember the shape, but when the shapes were paired with a pleasant voice they could remember significantly more.

"We think what happens is that the positive affect heightens the babies' attentional system and arousal," lead author of the study Ross Flom said in the news release. "By heightening those systems, we heighten their ability to process and perhaps remember this geometric pattern."

Babies' memories start to develop as soon as they're born. Follow more tips to boost your baby's memory during her first year.

Photo of a happy baby courtesy of Shutterstock. 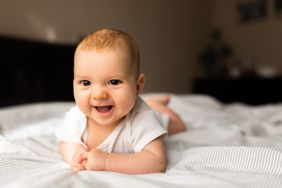