[Baer]...was arrested during a school board meeting Monday night after he continuously talked out of turn in protest of the Jodi Picoult book Nineteen Minutes. Baer was upset the school had assigned the book –- which contains a graphic sex scene between two teenagers -- to his ninth-grade daughter without first notifying parents, according to WCVB.

"You are going to arrest me because I violated the two-minute rule?" Baer asked at the meeting after he was reprimanded for speaking for longer than the allotted time, according to WCVB video. "I guess you are going to have to arrest me."

Baer was soon put in handcuffs and eventually charged with disorderly conduct, the outlet reports.

The book -- which examines the events leading up to and after a school shooting in New Hampshire -- has been assigned in the past, but the district said it forgot to notify parents this year. The district has since apologized and said it will make sure it doesn't happen again, according to the New Hampshire Union Leader.

Bookmark or pin this quiz for the next time you're unsure if you kid is too sick for school. 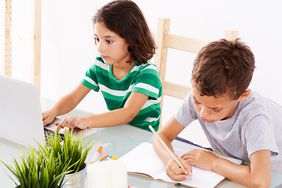