Allergic Reactions to Baby Wipes May Be Common in US

"I think it may be more common than people realize," said study coauthor Dr. Mary Wu Chang, an associate professor of dermatology and pediatrics at the University of Connecticut School of Medicine.

Chang reported on six children who had developed mysterious rashes and came to the UConn Health Center for help.

The first, an 8-year-old girl, showed up with an angry red rash around her mouth and on her buttocks. She had initially been treated with antibiotics and steroids. Each time she was treated she improved somewhat, but the rash always came back.

When Chang looked at the child's medical history she started to wonder if the girl might be having an allergic reaction. "What made me think of the wipes was that the rash was on her face and on her buttocks," Chang said. "So I asked the mother what she was using to clean her."

The mother told Chang she used baby wipes and then the researcher remembered a report she'd recently read about a Belgian man who had had a reaction to a chemical preservative known as methylisothiazolinone (MI) that's found in baby wipes and other products.

Chang tested the girl for an allergy to MI and sure enough, the test came back positive. When the mom stopped using the wipes, the rashes cleared up.

Over the next 22 months five other children showed up at the UConn center with the same types of rashes, all of whom cleared up as soon as parents stopped using the baby wipes.

Chang isn't ready to tell parents to eschew wipes entirely. "They're so convenient," she said. "I have three kids, so I know how hard it is to do the changes, especially when you're traveling. But maybe when you're at home, it would be better to use a gentle cleanser and water. That way you minimize exposure."

Track Baby's growth and development with our downloadable charts and checklists. 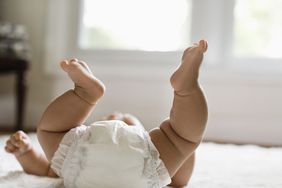