They're not glaring signs of mental illness, but these behaviors could be indicators that there is something going on.

Behavioral and mental health issues are very common. In fact, millions of children have been diagnosed with depression, anxiety disorder, attention deficit disorder, and ADHD worldwide. These conditions are normal, as are other behavioral disorders. But what can (and, more importantly, should) you do if think your child is struggling emotionally? What are the signs of mental health disorders in kids? Well, they vary—from child-to-child and condition-to-condition.

"We often talk about these worries as being 'pink' instead of red flags," explains Rahil Briggs, Psy.D., national director of HealthySteps at Zero to Three, in Washington, D.C. "Although they aren't necessarily glaring signals of a clinical disorder, they can be subtle evidence of a developing problem."

Here are the most common behaviors to be on the lookout for.

1. Disordered sleep. Beyond babyhood, kids should be getting around ten hours of shut-eye per night. Serious concerns go far beyond the usual gripes. Children with depression sometimes seem excessively sleepy and drawn to bed at odd hours of the day. Those with anxiety, attention deficit hyperactivity disorder (ADHD), or DMDD often take hours to fall asleep and wake up multiple times every night. Kristin Harlan's son, who has DMDD, went almost three days with just an hour or two of sleep when he was 6.

2. Tummy trouble. Bellyaches are a common kid complaint, but frequent stomach pains that can't be explained by constipation or a food intolerance might have psychological roots. Research has long linked chronic GI woes in children with both anxiety and depression.

3. Obsessive thoughts or fears. In kids who may have anxiety, a thought becomes so all-consuming that it interferes with everyday life. Common obsessions, particularly in children who also have OCD, are safety and germs. A child suffering from OCD may be compelled to wash his hands several times a day, often at inconvenient times, to ease his anxieties. Fears can wreck routines too. "A typical kid who gets stung by a bee might try to avoid bees but still play normally," says Carol Weitzman, M.D., professor of pediatrics at Yale University. "We become concerned when a child's fear of bees keeps him inside and the whole family starts to organize their plans around that—skipping trips to the park or the pool."

4. Disinterest in Fun. Kids have different passions, but a depressed child doesn't get excited about much of anything. "It's common to see an inability to find joy, even in things that used to seem exciting," says Joan Luby, M.D., director of the early emotional development program at the Washington University School of Medicine in St. Louis.

5. Guilty conscience. "A child who's prone to depression may feel absolutely terrible about small transgressions and need an unusual amount of reassurance to feel better," says Dr. Luby. Recent brain research shows that an area of the brain called the anterior insula is smaller than average in guilt-prone children as well as in depressed adults, suggesting this character trait might be a powerful predictor of later depression.

6. Explosive anger. Daily tantrums with aggression, destructive behavior, and other signs of abnormal intensity can be symptoms of DMDD, depression, and other concerns.

7. Dark thoughts. In Dr. Luby's research on depressed preschoolers, she found that many acted out morbid themes during imaginary play. Even small acts of self-harm can be a harbinger. At age 6, Angie Duray's son Will, who has depression, would literally beat himself up over a tricky homework assignment. "He'd call himself a stupid idiot and say he'd never learn, and then he'd bang his head on the table. One time he stabbed his hand with a sharp pencil," Angie remembers. 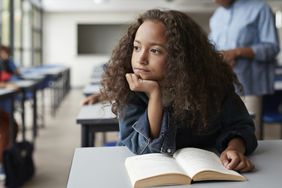 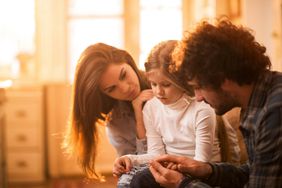