The pink stuff treats upset stomach and diarrhea, but the original Pepto-Bismol formula isn’t recommended for kids. Here’s what parents need to know.

Kids and stomachaches go hand-in-hand. Sometimes you can pinpoint the cause (like that carton of ice cream they snuck from the freezer) and other times you're left scratching your head. Either way, it's easy to reach for that bottle of Pepto-Bismol in your medicine cabinet. The "pink stuff" effectively treats many digestive problems—but you probably want to think twice before using it on kids.

Most Pepto-Bismol products (such as the Original Liquid) are only safe for those 12 years and older. That's because they contain ingredients that may be harmful to children and teens, especially if they are recovering from chicken pox or flu symptoms. Children ages 2–11 must use a specifically formulated option called Pepto Kids. Here's everything parents need to know.

Everything Parents Need to Know Rotavirus and Stomach Flu

Why Kids Shouldn't Have Pepto-Bismol

Pepto-Bismol can help treat upset stomach, nausea, gas, and diarrhea. The main ingredient is bismuth subsalicylate—and since 2003, the Federal Drug Administration (FDA) has urged anyone under 12 to avoid it. What's the reason? Bismuth subsalicylate is a derivative form of aspirin, which might cause Reye's syndrome (also known as Reye syndrome and Reye-Johnson syndrome) in children.

Reye's syndrome is a rare but potentially life-threatening illness that doctors don't fully understand. It's linked to kids using aspirin products during a viral illness, and it most often affects the brain and liver. According to the American Academy of Pediatrics (AAP), Reye's syndrome typically appears after a child shows improvement from the viral infection.

"However, then [the child] abruptly starts to vomit repeatedly and frequently every one or two hours over a twenty-four to thirty-six-hour period, becoming lethargic or sleepy, which then turns into agitation, delirium, or anger," the AAP says. Soon the child may experience confusion and, if allowed to progress, Reye's syndrome could cause seizes, coma, or death.

"Since the medical community issued a public warning against the use of aspirin during viral illnesses, the number of cases of Reye syndrome has decreased greatly," says the AAP. "Therefore, we strongly recommend that you do not give aspirin or any medications containing aspirin to your child or teenager when [they have] any viral illness, particularly chickenpox or influenza."

To address this issue, Pepto-Bismol began manufacturing a chewable version of their medicine that's safe for children ages 2-11. Called Pepto Kids, it relies on calcium carbonate instead of bismuth subsalicylate, so it doesn't come with a risk of Reye's syndrome.

Pepto Kids can treat upset or sour stomach, heartburn, and indigestion. If giving it to your child, check the label for dosage information, as it largely depends on their weight and age. Still, it might be best to consult your pediatrician before giving any over-the-counter tummy meds to kids.

Other Solutions for Tummy Troubles in Kids

Just because your child can't have original Pepto-Bismol doesn't mean you don't have options to soothe their tummy troubles. Parents can give the child-safe version, Pepto Kids, to anyone over 2 years old (preferably with a doctor's approval and in a weight-appropriate dose). Parents can also consider these natural remedies for gastrointestinal distress:

Most tummy issues go away on their own. But you should call the doctor if you notice signs of dehydration, high fever, severe gastrointestinal issues (nausea, vomiting, diarrhea), bloody stool or vomit, or other worrisome symptoms. You'll also want to follow up with a doctor if your child is having ongoing or regular stomach pain or digestive problems to get to the root of the problem. Stomach ailments can have many causes from anxiety to food allergies.

The original Pepto-Bismol is only safe for kids 12 and up. Pepto Kids is safe for kids ages 2–11, but for tummy troubles, you'll want to consult with a pediatrician to be on the safe side before administering any medications. 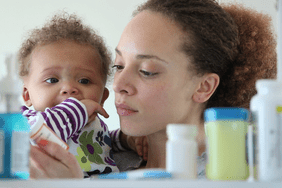 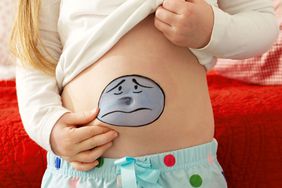 'My Stomach Hurts': Common Causes and Cures for Tummy Trouble