From Googling symptoms to requesting antibiotics, one pediatrician tells us the truth about the things doctors wish parents would stop doing.

Parenting doesn't come with a handbook, so unsuspecting moms and dads are left to figure out a lot on their own. Our go-to sources of advice—friends, the internet, our own parents—might not have the most reliable, up-to-date info. Then when we get to the pediatrician's office, we're either too stressed, rushed, or embarrassed to ask our questions. Doctors are great at telling you what to do, but even they might be hesitant to be upfront with parents about what not to do. So we asked Bill Bush, M.D., pediatrician-in-chief at Helen DeVos Children's Hospital in Grand Rapids, Michigan, to give us the truth about the things parents should stop doing, now.

1. Stop Looking to the Internet for Medical Advice

When you're freaked out about your child's symptoms, the first place to turn is usually Dr. Google. And while trusted sites like the American Academy of Pediatrics can have useful info, it's still impossible to diagnose your kid over the internet. Instead, take your concerns to your doctor. "I've been given websites to look up because a parent is pretty sure their child has X, Y, or Z disease," Dr. Bush says. "I'm always happy to look and get back to them, but a diagnosis is based on our medical evaluation."

3 Things to Know About Medical Advice on Social Media

2. Stop Going to the ER for Everything

I'm guilty of this one. Recently my 3-year-old ran head-first into the fridge, and after blood started coming out of his nose and mouth, I rushed him to the ER without waiting for a call back from his doctor. Four hours and a $900 bill later, he was pronounced totally fine. "Except for extreme emergencies, getting a phone call in to your physician's office gives time for the child to calm and the family to make assessments, and for us to determine if there's an alternative place we can have you seen," Dr. Bush says. An urgent care facility or the pediatrician's office the next day may be better options.

It's natural to want our kids to get better as soon as possible, but Dr. Bush says antibiotics aren't always the answer. "There are times when it's absolutely appropriate to give the antibiotic, like when they have a bacterial infection, but for the majority of the patients we see with viral illnesses, it's not," he says. "Colds and coughs don't need an antibiotic, they just need time to heal." Plus, giving antibiotics too often can lead to antibiotic-resistant bacteria, which are then harder to fight off.

Ironically, just as some parents rush to medicine, others are scared by vaccines. Even if parents agree vaccines are a good thing, they're concerned about giving many at the same time. "Very solid evidence exists that immunizations prevent many deadly and debilitating childhood diseases," Dr. Bush says. "The FDA requires any new combination of vaccines to prove equal effectiveness as if they were given on separate dates so we're not overwhelming the immune system." The problem with delaying vaccines, especially with babies, is children then go unprotected for longer. "When you start spreading them out, you put more kids at risk," he says.

Let's face it: Screens are a part of our lives now, which the AAP recognized when they relaxed their rules around screen time. But even so, Dr. Bush says to make sure your kids have outdoor play for exercise, and face-to-face interaction for social development. "Life's about interacting with other people, so encourage children to play with their friends in person instead of texting or playing video games online," he says.

6. Stop Blaming Your Child's Cold On Being Outside

This is one myth that just won't die. But your kid is not going to catch a cold by going jacket-less for the 10-second walk to the car, so it's probably not worth fighting that battle. "Viral illnesses such as colds come from the spread of germs—kids touching everything and then they touch their eyes, nose, and mouth," Dr. Bush says. "We see much more spread of illnesses in the wintertime when kids are all condensed into one small area for the entire school day."

We all lead busy lives, and when it comes time for what we consider "non-essential" appointments, it's easy to let them pass by. But Dr. Bush says that's a mistake. "If we switch from providing sick care to well care, we can do a better job of preventing and managing certain diseases," he says. This includes hearing and vision problems, heart murmurs, blood pressure elevations, kids who are failing to grow, and spines that may be developing scoliosis. Plus, the visits give you and your child a chance to feel more comfortable with your doctor, so you'll be more likely to discuss any concerns in the future.

You may think you're helping your child's hygiene, but you're really just pushing wax further into the ears. "Kids will come in sometimes with ear pain or decreased hearing because their ears are just so packed with wax from the Q-tip not bringing it out, but pushing it back," Dr. Bush says. Instead, allow some water to get into your child's ears at bath time, because the moisture should help wax naturally work itself out.

9. Don't Stress (Too Much) About Your Child's Temperature

It can be alarming when your child develops a fever, but once they are out of the newborn stage when it may be dangerous, it's just something else to report to your doctor. "It's a symptom like a runny nose, cough, or pain, part of the collection of information that helps us make decisions on what's the appropriate diagnosis and treatment," Dr. Bush says. "It's very rare that a fever alarms us."

There are exceptions, of course. According to the Cleveland Clinic, fevers over 104 should be reported—and may require immediate medical attention. Fevers lasting more than five days may also be cause for concern. However, these are exceptions, not the norm. 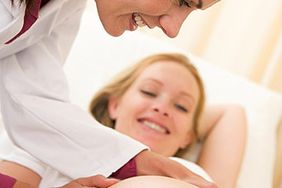