What does your child's cough mean, and should you seek medical attention? We broke down eight different types of coughs you should know.

Medically reviewed by Mona Amin, D.O.
Mona Amin, D.O., is a pediatrician, mom, and creator of The New Mom’s Survival Guide based in Florida.
learn more

From raspy coughs to barking coughs, children have all sorts of coughs. They are one of the most common symptoms of pediatric illness. And while most coughs are caused by a respiratory condition, such as a cold, influenza, or asthma, sometimes, however, they can signal something more serious, like whooping cough or pneumonia. Read about eight different types of coughs in toddlers and children, and determine if you need to visit the doctor.

Your child went to bed with a stuffy nose, but they've been sleeping peacefully for a few hours. Everything seemed fine, but then—suddenly—you hear what sounds like a barking seal in the next room. Your child has developed a barking cough.

The Likely Cause: Croup, a viral illness that causes inflammation in the larynx (voice box) and the trachea (windpipe), may cause a barking cough in kids. It's most common between October and March, and it usually affects those ages 6 months to 3 years. The telltale croup cough usually gets better during the day but returns later, and you may notice your toddler coughing at night. He may also make a high-pitched whistling sound (called stridor) when he inhales. Some kids tend to get croup every time they have a cold.

Croup Treatment: If your child develops a barking cough, you should bundle them up and go outside, assuming it is cool where you live, as cold air often helps relax the airways. You can also turn on a hot shower and sit with your child in the steamy bathroom for 15 to 20 minutes, since the warm, moist air may also help, says Jennifer Shu, M.D., editor of The American Academy of Pediatrics' Baby and Child Health. Call 911 if your child is truly having trouble breathing or if they have stridor that gets worse with each breath or lasts for more than five minutes.

Between croup coughing attacks, use a cool-mist humidifier in your child's room, and make sure he drinks plenty of liquids. Although croup usually resolves on its own, always call your doctor when you suspect it. Recent research has found that one dose of oral steroids—which doctors used to prescribe only for severe croup—may also be helpful for milder cases.

Your child's cough sounds mucousy, and they have a runny nose, sore throat, watery eyes, and poor appetite.

The Likely Cause: A common cold often causes this type of cough in kids, babies, and toddlers. Colds generally last for one to two weeks, although they're more cumbersome (and most contagious) in the first few days. Children get an average of six to ten colds a year, according to the National Institute of Allergy and Infectious Diseases.

Colds Treatment: Since colds are caused by viruses, antibiotics won't help a phlegmy cough. If your child is too young to blow their nose, use saline nose drops and a bulb syringe to help clear the mucus. Using a cool-mist humidifier and giving them a warm bath can also help. You may want to let your child inhale some vapor rub—applied to a towel or directly onto their chest—though you should check your doctor before applying it to a baby's skin.

Also ask your doctor before giving your child any over-the-counter medicines, and inquire when they'll be old enough to suck on cough drops. And know that if your child has persistent green snot and a fever, they may have developed a bacterial sinus infection.

Your child has had an annoying cough off and on all winter long. It gets worse every night and any time they run around.

The Likely Cause: A dry cough in kids may be caused by asthma, a chronic condition in which the airways in the lungs become inflamed and narrowed, and they produce excess mucus. Although parents often think that wheezing is the primary sign of asthma, a hacking cough—particularly at night—may be a child's only symptom. "The mucus in the lungs creates a little tickle, which makes kids cough," explains Debbie Lonzer, M.D., assistant professor of pediatrics at Cleveland Clinic Children's Hospital. Other red flags: The cough is triggered by exercise, allergies, colds, or cold air. If your child is young or thin, you may see their chest caving in as they breath.

Asthma Treatment: See your doctor if you suspect asthma. Children who are old enough (usually age 5 or 6) will blow into a special tube to test lung function. To make a diagnosis in younger kids, doctors usually rely on the child's exam along with parents' reports about the pattern of symptoms and any family history of asthma or allergies. Children with mild cases can take inhaled bronchodilator medication during an attack while kids with moderate-to-severe asthma also need a daily preventive medicine. Call 911 if your child ever has significant trouble breathing or he becomes unable to speak, eat, or drink.

For the first time in their life, your child is too wiped out to play. They've got a weak, hoarse cough, as well as a high fever, muscle aches, and sniffles.

The Likely Cause: Influenza, otherwise known as the flu, is a viral illness that attacks the respiratory system and causes this type of cough in kids. The flu has a long incubation period in children, so they can walk around with the virus for days before they get sick, while sharing it with friends and family. "It's spread through little droplets, so when a classmate sneezes just once, the flu virus flies across the room," says Dr. Lonzer.

Flu Treatment: Give your child plenty of fluids and acetaminophen or ibuprofen (in they are older than 6 months) with food or milk to bring down their fever and relieve aches.

Your little one has had a cold for a few days, and now their cough has a raspy, whistling sound. He seems to be breathing rapidly and is very irritable.

What's probably causing it: Bronchiolitis is an infection of the bronchioles, the tiniest airways in the lungs. When they swell and fill with mucus, it's difficult for a child to breathe. The most common cause is respiratory syncytial virus (known as RSV). Bronchiolitis most often strikes young babies during the winter months, says Allan Lieberthal, M.D., clinical professor of pediatrics at the University of Southern California, in Los Angeles.

Wheezing Cough Treatment: Contact your pediatrician immediately if your child seems to be having difficulty breathing or drinking. Your doctor can diagnose bronchiolitis with a physical exam and a thorough history. Encourage your child to rest and drink plenty of fluids. Most children don't need medication (bronchodilators, antibiotics, or steroids), according to the guidelines. In serious cases, a child may need to be hospitalized to receive oxygen, fluids, or medication.

Your child has had a cold for more than a week and now they're having coughing fits—sometimes coughing more than 20 times in one breath. Between coughs, they have trouble breathing and make a strange whooping sound.

The Likely Cause: This type of cough sound is likely caused by whooping cough (pertussis), which has recently been on the rise. Bacteria called pertussis attack the lining of the breathing passages, producing severe inflammation that narrows—and sometimes even blocks—the airways. Children who have not yet been fully immunized are most likely to catch whooping cough (the five-dose DTaP vaccine is usually given at 2, 4, and 6 months, between 15 and 18 months, and between 4 and 6 years).

However, young babies are at greatest risk. "Infants under 6 months don't have enough strength in their lungs to make the characteristic whooping noise, so it's harder for parents to detect," says Gordon Bloomberg, M.D., associate professor of pediatrics at Washington University School of Medicine in St. Louis. Instead, this type of cough in babies may come in continuous bursts ending with gagging or vomiting, they may briefly stop breathing, and their lips may turn purple because they're not getting enough oxygen.

Whooping Cough Treatment: Call your doctor immediately if you suspect whooping cough. Babies under 6 months will need to be hospitalized. The infection is treated with antibiotics, and other adults and children in your household may need preventive antibiotics and a booster shot to avoid getting sick. (Whooping cough is highly contagious, and immunity begins to wane five years after immunization.) Antibiotics will clear up the infection after about five days if they're started early enough, but your child's cough may linger for months and/or return when they get subsequent respiratory infections.

Your child's had a cold for a week now, and it's getting worse. Their cough is wet and phlegmy, and their breathing seems to be faster than usual.

The Likely Cause: Pneumonia, in which a virus or bacterium invades the lungs, causes them to fill up with fluid. "Because the child is trying to get the fluid out of his lungs, a pneumonia cough tends to be pretty ugly," says Dr. Lonzer. "This is the hacking-up-goobers one."

Pneumonia Treatment: Your pediatrician may be able to diagnose pneumonia with a physical exam but might need to send your child for an X-ray. She may do an oxygen-saturation test (placing a bandage-like strip around your child's finger) to check for a low oxygen level. If the doctor determines from the test results that the pneumonia is bacterial, she'll prescribe antibiotics; viral pneumonia has to run its course. Pneumonia can usually be treated at home, but if it's severe, your child may need to stay in the hospital for a few days.

Children and infants generally have mild cases of the coronavirus (COVID-19). While many kids remain asymptomatic, others get cold-like symptoms such as fever, runny nose, and coughing, according to the Centers for Disease Control and Prevention (CDC). The coronavirus type of cough is usually dry (without phlegm or mucus), but it could also be wet and productive. If your child develops symptoms of COVID-19—or the complication that experts are calling multisystem inflammatory syndrome (MIS-C)— call a doctor for guidance. COVID-19 symptoms generally show up two to 14 days after exposure. 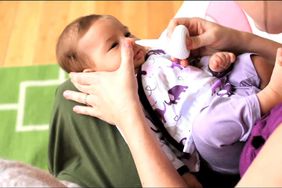