Chicken soup really works, antibiotics aren't the answer, and other key info you need to prevent a cold and survive the coughing and sneezing season.

Why Kids Are Such Cold Magnets

On average, kids under age 3 catch six to eight colds a year. "We think that since most children are encountering viruses for the first time, their immune systems aren't able to kill them as quickly as when they encounter them again," says Carol J. Baker, M.D., a professor of pediatrics at Baylor College of Medicine in Houston. What's more, because kids aren't overly concerned about having a runny nose, the virus tends to end up on their hands, clothing, and toys—where it can live for 30 minutes. When another child touches an infected toy and then rubs her nose or eyes, she can catch the cold.

However, having lots of sniffles early in life may protect kids later on. Researchers have found that children who develop frequent colds in preschool catch fewer colds during their school years—presumably because their immune systems have learned to recognize and fight off the bugs. And a German study found that babies who have more than one cold before their first birthday are less likely to develop asthma by age 7.

Colds typically last 6 to 14 days—longer than many parents think they're supposed to. "They're most contagious during the first three days of symptoms, but you can still catch a cold from someone who's had it for two weeks," says David Jaffe, M.D., director of emergency medicine at St. Louis Children's Hospital.

How Long: Often the first sign of a cold, it lasts about 5 to 9 days.

How Long: Starts about midway through a cold and lingers for up to three weeks.

How Long: Half of kids have a temperature of 101 to 103 degrees F for the first two or three days. Call your pediatrician if the fever lasts longer.

The easiest way to catch a cold is by getting the virus on your hands and then touching your nose or eyes.

Yes, but only if you wash with soap and water for at least 30 seconds. "An alcohol-based hand sanitizer is equally effective," says Donald Goldmann, M.D., medical director of infection control and quality improvement at Children's Hospital, in Boston. In fact, researchers at the University of Pennsylvania found that kids who regularly use a hand sanitizer have 50 percent fewer absences from school than those who don't.

Covering Your Mouth When You Sneeze

Millions of cold germs are expelled into the air with every sneeze.

Surprisingly, cold viruses don't spread easily through the air--unless someone sneezes right into your face, explains Dr. Jaffe. In fact, you're unlikely to catch a cold in the doctor's waiting room or on an airplane. Even so, it's somewhat protective--and certainly more polite--to contain a sneeze behind a hand or a tissue.

Bundling Up in Winter Weather

You can catch a cold from getting chilled.

It makes sense to dress your child warmly when the temperature is low, but a jacket won't keep him from getting sick. Researchers have actually made people wet and cold and then infected them with viruses to see if they were more likely to get sick than people who stayed warm. Though the cold people were more uncomfortable, they got sick at the same rate.

Skipping Good-Night Kisses When You're Sick

Cold germs from your mouth can infect another person.

"Studies have shown that kissing is not an efficient way to transmit cold viruses—probably because you need to get them in your eyes or nose in order to get sick," says Dr. Goldmann. "However, some germs can be spread effectively by a kiss, such as the bacteria that cause strep throat."

Over-the-counter cough and cold medications may not be the best treatment for kids under the age of 6, according to the American Academy of Pediatrics. In some cases, doctors have seen children who had significant reactions to such products. "These drugs can cause agitation, irritability, and hallucinations," Dr. Jaffe says. Both pseudoephedrine (a decongestant) and dextromethorphan (a cough suppressant) can cause heart-rhythm disturbances and agitation. In addition, some studies have found that these products don't even relieve symptoms in kids under the age of 6. Check with your doctor for older kids.

Myth: Antibiotics will help your child get over a cold. Since colds are caused by viruses, they aren't treatable with antibiotics, which kill only bacteria.

Myth: Green snot means your child has a sinus infection. Colds typically go through a phase when the nasal secretions are yellowish or greenish.

Myth: Starve a cold. It's important for your child to eat to keep her body strong and help her fight the infection. Don't worry, though, if she doesn't have much of an appetite for a day or two. Just make sure she keeps drinking. "If she has a fever and a runny nose, it's easy for her to get dehydrated," Dr. Baker says.

Myth: Don't let him cough. Coughing is actually a protective mechanism that clears mucus from your child's respiratory tract. Avoid giving him a cough suppressant unless it's specifically recommended by your doctor.

Myth: Herbs, vitamins, and minerals stave off sickness. Researchers have rigorously tested vitamin C, echinacea, and zinc—with disappointing results. In fact, one recent study found that some kids who take zinc have unpleasant side effects, such as nausea, diarrhea, and throat irritation. 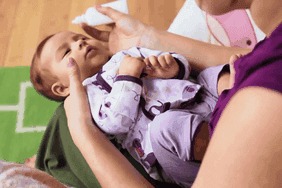 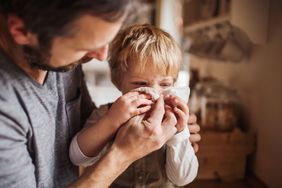