All About CMV Infection in Babies and Children

Your child will likely contract cytomegalovirus (CMV) at some point in their life. Here's what parents should know about CMV, and why it's usually not a cause for concern in kids.

The majority of people will acquire cytomegalovirus (CMV) during their lifetime, but most haven't even heard of it. "Nearly one in three children are already infected with CMV by age 5," according to the Centers for Disease Control and Prevention (CDC). More than half of adults get CMV by age 40.

Most CMV cases are asymptomatic, but some people present with mild side effects that resemble influenza or mono. Either way, it's not likely to cause any long-lasting complications in babies or children. Here's what parents need to know.

How is CMV Transmitted?

A form of herpes virus, CMV is spread through close contact with bodily fluids like saliva, urine, stool, and blood. It's not airborne, and it doesn't live long on surfaces, says Gail Demmler Harrison, M.D., a professor at Baylor College of Medicine and attending physician at Texas Children's Hospital, who has done research on CMV. It's often transmitted through activities like sharing food or drinks, playing with contaminated toys, changing diapers, or breastfeeding.

Young children and toddlers generally transmit the virus at a very high level. "Toddlers in daycare are virtual hot zones for CMV, and they shed the virus in their saliva and urine commonly," says Dr. Demmler Harrison. "Close contact with toddlers can result in CMV transmission"—because it's nearly impossible for toddlers to avoid sharing bodily fluids with parents and siblings.

Once you acquire the CMV virus, it stays in your body forever. "It's a latent virus," says Sallie Permar, M.D., Ph.D, chair of Pediatrics at Weill Cornell Medicine and NewYork-Presbyterian Komansky Children's Hospital, who is also on the board of directors at the National CMV Foundation. She adds that it can reactivate throughout a person's life, but it usually doesn't cause any problems.

CMV Symptoms in Babies and Kids

Most children with CMV don't have any symptoms at all. "It's very common that you get CMV and you don't even know, especially with toddlers," says Dr. Permar. That said, symptomatic infections happen in about 10 percent of cases, and they tend to resemble a mononucleosis-type illness.

CMV symptoms in babies and kids include:

Those with weakened immune systems might have more serious CMV symptoms. "In children with weakened immune systems, CMV infection can affect many organs of the body including the lungs, liver, kidneys, bone marrow, and bowels. In children with organ transplants, CMV infections are linked with rejection or malfunction of the transplant," says the American Academy of Pediatrics (AAP).

In babies and children, doctors can diagnose CMV infection by analyzing blood, urine, or saliva. But remember that CMV is rarely serious—and symptoms often don't appear at all—so most CMV cases go undiagnosed.

Healthy people don't usually need any treatment. "However, serious infections in children with weakened immune systems, such as those with HIV infection or an organ transplant, can be treated with a medicine called ganciclovir," says the AAP. "Most children with CMV infections remain symptom-free and lead completely normal lives, even though the virus remains inactive in the body."

If a mother gets CMV for the first time while pregnant (called congenital CMV), it might pass to the unborn baby through the placenta, where it can potentially cause a wide range of complications. According to Santosh Pandipati, M.D., maternal-fetal medicine specialist at Obstetrix Medical Group of San Jose in California, these can include "jaundice, rash, enlarged liver and spleen, hearing loss/deafness, inflammation of the eyes and vision loss (chorioretinitis), seizures, cognitive and motor deficits, and death."

It's important to note, however, that CMV transmission in utero isn't too common, and most infected babies don't experience any negative side effects. "The vast majority of women are not getting a primary infection during pregnancy," because they already had CMV in the past, says Amy Banulis, M.D., an OB-GYN for Kaiser Permanente in Falls Church, Virginia. "If a woman gets it for the first time while pregnant, the risk of transmission to the fetus is about 30-40 percent. And about 25 percent of those infected in utero will develop some type of complication."

CMV in Pregnancy: How Infection Can Affect Your Unborn Baby

If doctors suspect congenital CMV, they can diagnose infection through maternal blood tests (which detect CMV antibodies) or amniocentesis. You can't prevent transmission or treat CMV in the womb, but there's some evidence that intravenous ganciclovir or oral valganciclovir can improve outcomes after birth. These medications generally aren't recommended outside of research studies, says Dr. Pandipati, so talk to your doctor for more information.

To prevent first-time CMV during pregnancy, wash your hands often and avoid contact with bodily fluids (especially around young children). See a doctor if you're concerned. 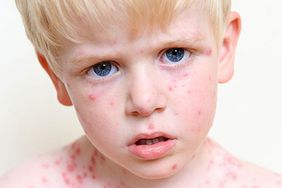