How to Get Pregnant After Depo-Provera

Depo-Provera is a highly effective form of birth control, but fertility can take months to return after stopping it. Find out how long it really takes to get pregnant after Depo-Provera.

Used as a form of contraception, Depo-Provera (medroxyprogesterone) is an injection of the hormone progestin that keeps you from ovulating. It also thickens cervical mucus, making it more difficult for sperm to reach the egg. As long as you consistently get the Depo-Provera shot about every three months, it's more than 99% effective at preventing pregnancy.

But what if you've been taking Depo-Provera, and you decide you're ready to conceive? Unlike some birth control methods, Depo-Provera may temporarily impact your fertility even after you stop using it, so proper planning is key. Here's what you need to know about getting pregnant after taking Depo-Provera.

How Long Does Pregnancy Take After Stopping Depo-Provera?

If you're thinking of getting pregnant within the next few months, Depo-Provera is probably not the best birth control option for you. A single shot of Depo-Provera provides three months of protection against pregnancy, so you won't be able to conceive for at least that long—and it could take even more time than that.

"It's possible to become pregnant after that three-month mark, but it usually takes several additional months for the complete effect of the hormone to dissipate and to begin ovulating and having regular periods again," says Hilda Hutcherson, M.D., clinical professor of obstetrics and gynecology at Columbia University Medical Center, in New York City.

Remember that everyone's body is different, and there's no way to predict when your fertility will return. For some people, it can take more than a year after the last shot to begin having regular periods; for others, regular menstruation can happen as soon as four months after the last shot.

That said, the length of time you use the drug has no effect on how long it will take you to get pregnant after you stop using it, according to Depo-Provera's manufacturer Pfizer. So there's no need to worry if you just started taking Depo-Provera or if you've been getting the shot for years.

When to Stop Depo-Provera If You Want to Get Pregnant

If you're hoping to get pregnant in the near future, you should stop taking Depo-Provera right away. It usually takes several months to conceive after the injections—but for some people, regular ovulation might not return for 18 months (or longer), according to the manufacturer's website. If you still need to use birth control in the meantime, consider reversible forms of contraception such as an intrauterine device (IUD) or condoms until you're officially ready to start trying.

I Got Pregnant on Depo-Provera 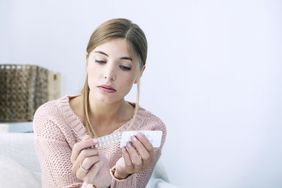