Many people worry about getting pregnant again after experiencing a miscarriage. Here's everything you need to know about pregnancy after miscarriage.

While it is possible to get pregnant within a couple of weeks after a miscarriage, the physical and emotional healing you may need to feel ready to get pregnant again can take much longer. For those who have experienced a miscarriage, there's no "one-size-fits-all" solution to managing grief. While some start trying to conceive again right away, others wait months or years.

But take heart: If you want to try again, it's very likely you will come out on the other side with the baby you've dreamed about. "If you've had one miscarriage, your chance of having a successful pregnancy isn't any different from anybody else's," says Jani Jensen, M.D., a reproductive endocrinologist and assistant professor at the Mayo Clinic in Rochester, Minnesota. "That should be hopeful news for couples."

So how soon after a miscarriage can you get pregnant, and is there an ideal time to begin having sex that could conceive a baby? We spoke with experts to find out.

Having Sex After Miscarriage

Most often, your body will likely complete the miscarriage on its own; otherwise, you'll need a dilation and curettage (D&C) to surgically remove the contents of the uterus. How soon after a miscarriage you can have sex depends on how your body is healing, but often around two weeks after is a safe time.

Angela Chaudhari, M.D., a gynecologic surgeon and assistant professor in the Department of Obstetrics and Gynecology at Northwestern University Feinberg School of Medicine in Chicago, recommends visiting your OB-GYN for a follow-up appointment about two weeks after the miscarriage. If everything looks fine, "I tell my patients to go ahead and have intercourse," says Dr. Chaudhari. She notes, however, that patients who had a D&C might need to wait a few weeks to control the bleeding.

If you've had one miscarriage, your chance of having a successful pregnancy isn't any different from anybody else's.

How Soon After a Miscarriage Can You Get Pregnant?

You can get pregnant when you begin ovulating again, which can be as soon as two weeks after a miscarriage (though it may be longer). But just because you can, doesn't mean you should.

It's often recommended to wait for at least two months to conceive again, explains Zev Williams, M.D., Ph.D., director of the Program for Early and Recurrent Pregnancy Loss (PEARL) at Montefiore Medical Center and Albert Einstein College of Medicine in New York. However, Dr. Williams goes on to say, "it is most likely safe to try to conceive following one full menstrual cycle after the miscarriage."

Plus, research shows there is little to no physiological reason to wait and that trying to get pregnant during the first few months after a miscarriage results in higher conception rates than waiting longer.

A 2022 interpregnancy interval study conducted and published by PLOS Medicine challenged the World Health Organization's (WHO) recommendation to wait six months to conceive after an induced abortion or miscarriage because of potential pregnancy complications.

The study found that conceiving within three months is not associated with increased risk of adverse pregnancy results. "In combination with previous research, these results suggest that women could attempt pregnancy soon after a previous miscarriage or induced abortion without increasing perinatal health risks."

According to Dr. Karen Schliep, the author of a prominent study on how long to wait to attempt pregnancy after miscarriage, "While our data show no basis for delaying attempts at conception following a pregnancy loss, couples may need time to heal emotionally before they try again. For those who are ready, our findings suggest that conventional recommendations for waiting at least 3 months after a loss may be unwarranted."

Your Hormones After a Miscarriage

Waiting to heal before trying to get pregnant after a miscarriage is a wise choice not just for emotional and physical health but also because hormones play a huge role in conception and pregnancy. And just like other aspects of healing, your hormones will need time to settle too.

Some people may ovulate as soon as two weeks after a miscarriage, assuming the pregnancy was lost before 13 weeks, but it generally takes two months for their cycle to return. Waiting for a full two months—or for a complete and normal menstrual cycle, which generally takes about two months—ensures that the pregnancy hormone hCG has dipped to levels so low that it's undetectable. The uterine lining will also return to normal, making it receptive to receiving a future fertilized embryo.

Unfortunately, the only way to know for sure if the pregnancy hormones have completely decreased down to "zero" is to receive a blood test. Although Dr. Williams admits that it may not be the standard of care in all offices, he encourages people to ask their doctors for a blood test after miscarriage, especially if they're hoping to try for another pregnancy as soon as possible. In general, he recommends waiting about six weeks in the case of a first-trimester miscarriage for the test.

Note that the further along in the pregnancy a person is, the higher their pregnancy hormones will be, so you might need to wait longer for hormone levels to normalize after second-trimester miscarriages. "It's important to make sure that your hormone levels and the uterine lining have returned to normal," explains Dr. Williams. "And that can take longer when a pregnancy has been farther along."

How to Conceive After Miscarriage

Getting pregnant after a miscarriage is no different than it was initially. "You need to try to time intercourse as close to ovulation as possible and have sex every other day in the days leading up to it as well," says Dr. Chaudhari. This is applicable to people trying to conceive via penis in vagina sex, so it's important to note that many people and couples also conceive via intrauterine insemination, either at home or in a medical setting.

In addition to general recommendations for pregnancy planning—such as maintaining a nutritious diet and starting on prenatal vitamins—parents-to-be should "check in" on their emotional well-being. "You don't want to get pregnant simply to replace that pregnancy," explains Alice Domar, Ph.D., executive director of the Domar Center for Mind/Body Health at Boston IVF, assistant professor of obstetrics, gynecology, and reproductive biology at Harvard Medical School, and author of Conquering Infertility. "Start trying when you feel truly ready for the outcome, whether it's not getting pregnant, getting pregnant and having another loss, or getting pregnant and having a baby."

The most important thing is to always ask your doctor when you should try to conceive again. Every miscarriage is different, and your doctor can advise you on personal health.

Is It Easier to Get Pregnant After a Miscarriage?

It's unclear whether fertility increases after a miscarriage, but there is some evidence that it may be higher in the first few months. For example, a study from the National Institute of Health, published in the journal Obstetrics & Gynecology, studied more than 1,000 women (this study did not account for trans or nonbinary participants), and it found that 70% conceived within three months of miscarriage. Compare this with the 51% of those who conceived after waiting longer. More information is needed, but the study may show that there are advantages to trying to get pregnant sooner rather than later after a miscarriage.

Will I Miscarry Again?

The odds of a successful, healthy pregnancy after miscarriage are definitely in your favor. In fact, research shows that over 85% of people who have experienced a miscarriage will go on to have a healthy, full-term pregnancy afterward, with success rates even better for those that conceive within three months of a pregnancy loss. According to Dr. Chaudhari, some old data said that perhaps people were more likely to experience pregnancy loss again if they tried to get pregnant immediately after miscarriage, but that's all been debunked.

The Emotional Impact of Pregnancy After Miscarriage

Of course, getting the green light for sex and pregnancy after a miscarriage doesn't mean you're actually mentally up for getting pregnant right away. Many doctors feel that a person's emotional and mental health is vitally important to their physical health. You and your doctor are the best judges of when you, personally, are ready to try again.

"Attitude, positive thinking, receiving the correct information about her previous miscarriage, knowing her possibilities, considering that more than 85% of women get pregnant after a miscarriage, but at the same time, knowing her risks," are all part of the package, explains Ricardo Huete, M.D., Chief of OB-GYN at Torrance Memorial Medical Center in Carson, California.

What's more, this whirlwind of emotions won't disappear when you successfully get pregnant after a miscarriage. Indeed, if your last pregnancy ended in a loss, you may find yourself feeling overwhelmed with anxiety at every milestone you reach during your new pregnancy. It's also natural to rein in your excitement about having another baby after you've suffered a loss. You might do this to protect yourself, hoping to lessen your grief if you miscarry again.

Try leaning on family, friends, and health care providers for extra support—and realize that your partner might need additional attention, too. And remember, the odds are very much in your favor that your next pregnancy will go smoothly! 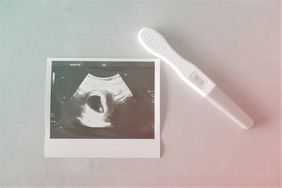 4 Questions About Pregnancy After Abortion, Answered

Your Period After Miscarriage: What to Expect
25 Tips To Get Pregnant, According to Experts